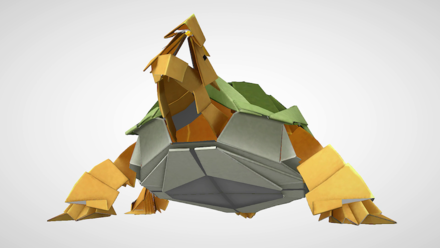 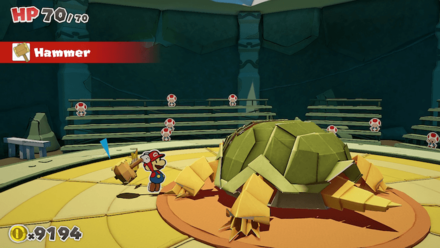 The main goal of the this battle is to approach the Earth Vellumental and attack each of its vulnerable areas (its four limbs + tail) with your hammer, which will make it retreat into its shell. During this section, you will only want to attack with a hammer, because using jump attacks (boots) will simply bounce off of its shell.

Along the way to each target, be sure and move the rings so that you can pick up the various powerups and bonuses that appear, such as treasure chests, x2 damage bonuses, and Extra Action panels. Earth Vellumental can deal some pretty heavy damage each turn, so be ready to block its three consecutive attacks it uses through Sandblast. If your HP gets too low and you still have two or more limbs to hit, be sure and pick up a heart. 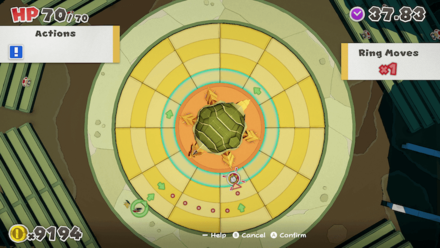 During the first turn, Olivia will basically guide you to exactly where you should go. Follow her instructions, then move the outermost ring two spaces counter-clockwise. After that, move the innermost ring counter-clockwise one space, then make Mario move. When he arrives at the Action Panel, select a Hammer (preferably the Shiny Hammer) to attack with, since jump attacks don't work (as mentioned above). Be ready to block after this.

In the second turn, Olivia suggests attacking Earth Vellumental's right front leg, although you are free to target any limb you want. For example, if you move the outermost ring two spaces clockwise, and the innermost ring five spaces clockwise (or three spaces counter-clockwise), you will be able to hit the right back leg. Target anyone of the legs, and use your strongest hammer attack. 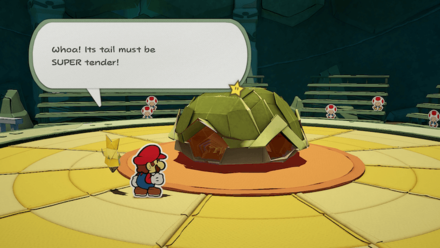 Once you have taken off about a quarter of the Earth Vellumental's health by striking two limbs with the Shiny Hammer (or three with the regular Hammerーless if you managed to land Excellents), you can switch your target to Earth Vellumental's tail. Hitting it with your hammer will cause it to retreat into its shell.

You can then finish it off very quickly by moving the Magic Circle (the space with the hand on it) directly in front of Mario and using all of his turns up to move to it. Then, use your 1000-Fold Arms to grab the Earth Vellumental and throw it, causing it to turn over. You will then go into Rush-time, allowing you to repeatedly hit Earth Vellumental, and do enough damage to finish it off. Just make sure to shake the controller as fast as possible.

Since this is your first Boss Battle, you'll notice that unlike in Ring Battles, in Boss Battles, you start outside the rings and you goal is to move towards the center and land on an Action Panel to attack. Instead of changing the enemies' positions to line them up for an attack, you'll change the positions of ring icons and battle panels in order to land an attack on the boss
Below, we'll explain the effect of each battle panel and ring icon.

As Olivia lets you know, certain attacks will bounce right off, depending on where they target. The boots will all target the shell, which will cause Mario to bounce right off. Instead, the main goal of this phase is to move in close the the Earth Vellumental's arms, then hit them using a hammer. This will both damage it and cause the arm to retreat. If you can use the Shiny Hammer twice, or the regular hammer three times (landing excellents), you can hit its tail and then quickly end the battle. 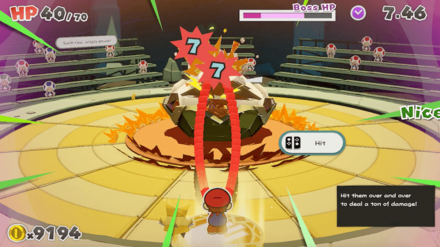 Once the Earth Vellumental has retreated into its shell, you can end the battle quickly by setting up a Magic Circle on the ring, then moving to it. This will allow you to grab the boss with the 1000-Fold Arms and flip it upside down, after which you can attack repeatedly. Doing this should put you into Rush-time, allowing you to finish it off. This attack easily lets you take off about 2/3 of the Earth Vellumental's HP.

Register as a member and get all the information you want. (It's free!)
Login
Opinions about an article or post go here.
Opinions about an article or post
We at Game8 thank you for your support.
In order for us to make the best articles possible, share your corrections, opinions, and thoughts about "Boss Battle Guide: How to Beat Earth Vellumental" with us!
When reporting a problem, please be as specific as possible in providing details such as what conditions the problem occurred under and what kind of effects it had.