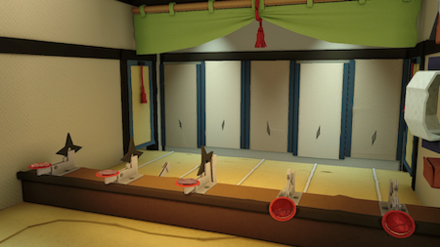 This is a guide to winning the Shuriken throwing mini-game on both Normal Mode and Expert Mode in Paper Mario: The Origami King. Learn the best way to score 21 points, 80 points, and 100 points!

How to Unlock the Shuriken Minigame 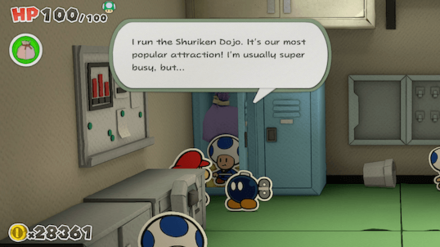 Even if you go to the Shuriken Dojo upon first reaching Shogun Studios, you won't be able to play. First, you'll have to find the dojo master in the Staff Room, hidden on the east end of the park. 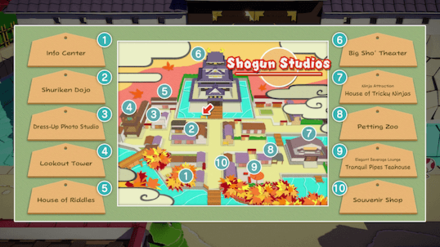 The Shuriken Dojo can be found at spot number 2 on the map. Make your way there and you'll be able to play the game with no fuss.

How to Win Normal Mode

This video guide demostrates the minimum number of steps to get exactly 21 points.

An interesting point about Normal Mode is that the targets appearing will be the same every time. This means it's possible to memorize the pattern to hit the correct targets. 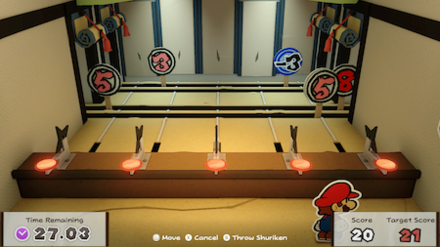 Where's a 1-point target when you need it...

The target order is set to make it very difficult to get 21 points from 20 points, as after the first few targets, targets with a 1-point value will become extremely scarce. The easiest way to win is to either reach a value near 20, such as 19, then hit a 2-point target to reach the goal, or to reach 22 points and hit a negative 1-point target to reach 21 points.

How to Win Expert Mode

This video shows how to get over 100 points in Expert Mode.

Unlike Normal Mode, the target order is not always the same in Expert Mode. You'll have to use your raw skill to take down the targets regardless of what they throw at you!

Remember Which Shurikens are Loaded 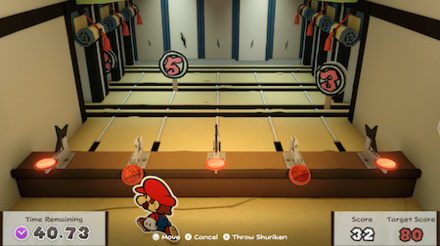 A perfect shot, but no Shuriken to launch.

Although the game seemingly has unlimited ammo, firing has a price, as each Shuriken you launch will take a few seconds to come back. Always keep in mind which Shurikens can currently be used, and instead of waiting in vain for one to come back, move to a different Shuriken which can hit the target or give up and focus on another target.

This means that missing a target is not just a loss of the target you were aiming at, but potentially future targets as well. Think before you fire! 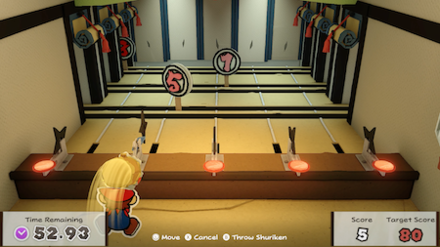 When trying to time the hits on the rotating targets, instead of watching the face to try to time the hit, simply remember that targets will show a side once every other Shuriken. So if a rotating target shows a valuable number in front of one shuriken, but you can't get it in time, simply wait until it's moved two shurikens ahead to score the perfect hit. 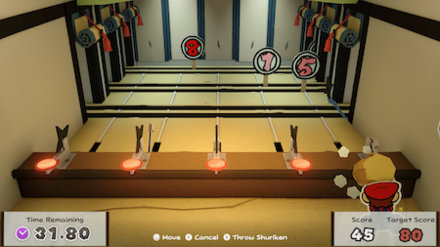 The majority of the targets will be moving across the stage, and can seem urgent to hit because they are moving away before your eyes. However, the stationary targets actually disappear more quickly, making these targets a higher priority to hit first.

In addition, stationary targets are easier to hit, so you can take them out quickly and then move on to other targets. On the other hand, moving targets will often take some time to line up with the shuriken, and slow-moving targets in particular can waste a lot of your time while you wait for them to get to just the right position. 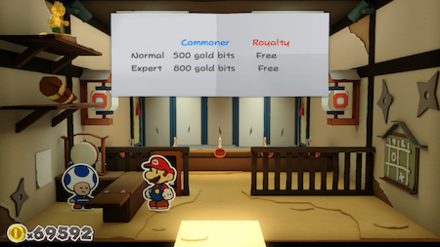 Without the Royalty Pass, you'll have to pay 800 coins every single time you try Expert Mode. If you're trying for the 100 point prize, that's not going to be very economically viable, so go ahead and grab a Royalty Pass in advance to play for free indefinitely! 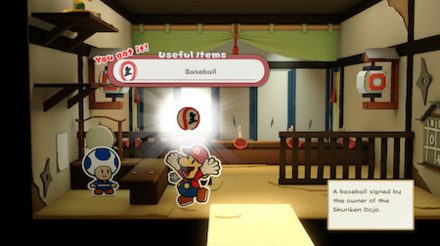 Scording exactly 21 points in Normal Mode will net you a Baseball, a Key Item which is used to progress in the story.

If you win on Normal Mode afterwards, you'll earn a Mushroom or a Tail instead for winning. 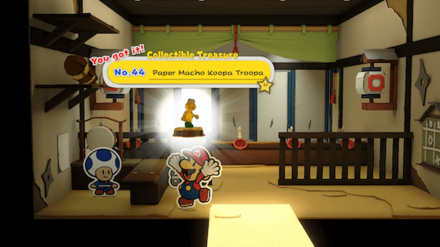 80 points is the required value to earn a prize in Expert Mode. The first time you win, you'll get a one-time only prize of Collectible Treasure No. 44: Paper Macho Koopa Troopa!

If you score at least 80 points on Expert Mode afterwards (including 100 points or more), you'll earn a Fire Hammer or Ice Hammer.

Get 100 Points on Expert Mode 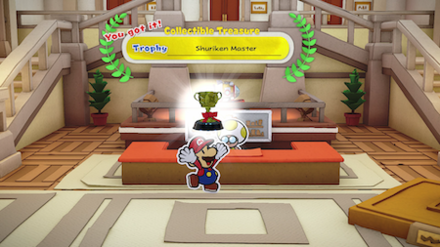 If you can manage to score over 100 points in the Shuriken Minigame, the Dojo Master will tell you that you've earned a Trophy. The next time you visit the Toad Town Museum, talk to the curator and he'll present you with the Shuriken Master Trophy!

Register as a member and get all the information you want. (It's free!)
Login
Opinions about an article or post go here.
Opinions about an article or post
We at Game8 thank you for your support.
In order for us to make the best articles possible, share your corrections, opinions, and thoughts about "How to Win the Shuriken Minigame | Shuriken Dojo" with us!
When reporting a problem, please be as specific as possible in providing details such as what conditions the problem occurred under and what kind of effects it had.