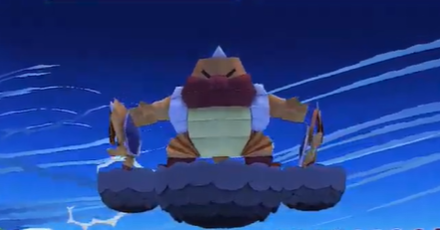 Compared to the other boss battles you've dealt with up to now, this one is very simple and straightforward. The objective is to take out all of the bros on the ground layer, so you can bring the bros on the upper layer down to attack them. Luckily, you can essentially one-shot them with the help of the Vellumentals.

During this phase, the only thing you really need to be wary of is the lightning out on the map. The lightning is active over a panel in both the innermost ring and the one before it. Make sure that the route you plot doesn't have you walking into it, because hitting the lightning will immediately end your movement.

When the battle first begins, four of the Sumo Bros will come to the ground and take panels away from the board. The main thing you should try and do is ensure that there is an ON Panel and a Magic Circle on the board, so those are the panels you want to make sure are on the board. Find the Sumo Bro holding the ON Panel, and plot a course toward it with an action panel right in front of the Bro. If possible, try and pick up an x2 damage panel to ensure you can take him out using one of your stronger weapons. 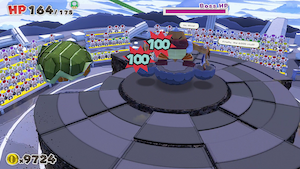 Once you've got both the ON Panel and Magic Circle on the map, it is time to call in the Earth Vellumental. Set up a path that lets you activate the ON Panel and end on the Magic Circle. The Earth Vellumental summon will deal 100 damage to all Sumo Bros on the ground, making quick work of this phase. In addition, it raises you up, so you will be safe from the attacks of the bros above.

After defeating the Sumo Bros on the ground, the ones from the top layer will come down. Once again, they will snatch up panels, taking away your Vellumental Magic Circles. However, this doesn't make the battle significantly harder. 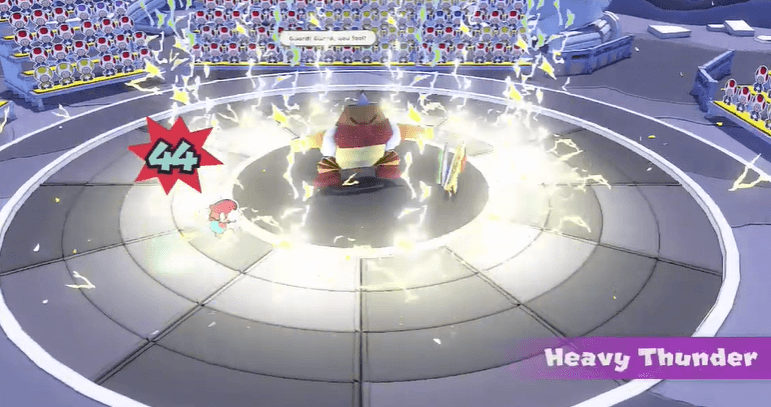 The main Sumo Bro is weak to fire, so you should try and attack the Bro who snatched up the Fire Vellumental panel. Plot a path toward the Bro, again picking up the x2 damage or double action panels on the way, and make sure it ends in an action panel. Defeat this Bro and regain the Magic Circle. The enemy will use a very powerful Heavy Thunder attack here, which will do nearly 50 damage to Mario, so make sure you're prepared for it. 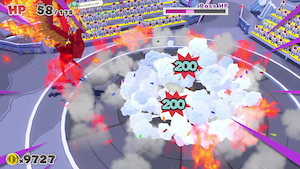 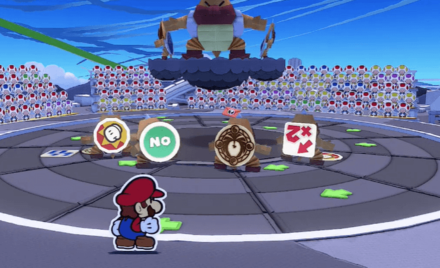 In both phases, the Sumo Bros will take away panels from the board to limit your possible moves. Your main concern should be making sure you have the ON Panel and Magic Circles out in phase one, so don't worry about the other panels. Once you use the Earth Vellumental to wipe them all out, you'll regain all of the panels lost anyway. 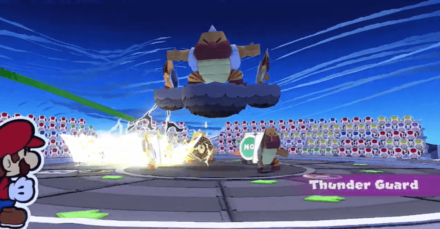 In the first phase, Sumo Bro uses this lightning attack on the two center panels. It only targets four panels total (two on both sides), but running into it will damage Mario and immediately end his movement. Be careful when moving in towards the center, and make sure to go around these.

For an action panel, you'll need to use a type of iron boot if you want to jump attack these guys. If you have them, the Flashy Iron Boots will allow you to deal more damage, likely taking out the Sumo Bro in one action. In addtion, using jump atacks means that you can target the foe from several spaces away.

While you could continue to pick them off one by one in this fashion, we highly recommend jump attacking the one that has the panel you need, then using a Magic Circle to summon a Vellumental and wipe out all Sumo Bros on the ground (in both phases)

Register as a member and get all the information you want. (It's free!)
Login
Opinions about an article or post go here.
Opinions about an article or post
We at Game8 thank you for your support.
In order for us to make the best articles possible, share your corrections, opinions, and thoughts about "Boss Battle Guide: How to Beat Sumo Bros" with us!
When reporting a problem, please be as specific as possible in providing details such as what conditions the problem occurred under and what kind of effects it had.