Pin Tier List | Best Pins to Use | NEO: The World Ends with You (NEO TWEWY) 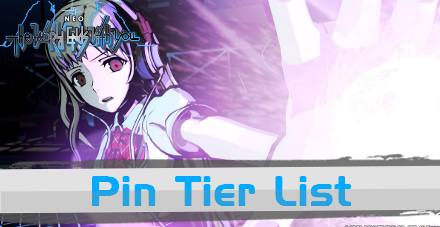 This is a Pin Tier List for NEO: The World Ends with You (NEO TWEWY). Read on for a guide on the best Pins to use in the early game, mid-game, late game, and post-game!

Click the pin for a link to their info page!

Best Pins to Use

The main difficulties you'll face in Week 1 are the sharks (Swing Shark), the scorpions (Break Stinger), the elephants (Pachy R&R), and the T-Rex's (Distortius Rex). These pins will help you fight those Noise, as they do powerful damage quickly, allow for stunning enemies, and can be operated from a distance.

In particular, A Mysterious Gift does great damage against Pachy R&R, while Got Your Back and Watch Your Step stun the scorpions and easily get those sharks out of the water.

In Week 2, raw power just won't cut it, due to the swarms of enemies that sporadically run around the battle. Your pins will have to take control of the battlefield, by stunning enemies or removing them from their elements. The pins listed above do that, while maintaining effective damage due to Pin Affinity advantages over most enemies in Week 2.

Due to the sheer number of strong opponents that populate each battle in Week 3, it's recommended to focus on building up to Killer Remixes, as they deal incredibly powerful damage and regenerate a significant amount of your HP. This helps you against Plague Noise, boss fights, and longer chains.

It's recommended to have at least 1 Sound Pin with the Groove Boost ability and Fire and Ice pins, as most Week 3 enemies have a weakness towards the latter two affinities.

How to Beat Plague Noise

For the post-game, prepare your strongest Pins, as you'll unsurprisingly face the toughest bosses of the game. If you're replaying certain days, be sure to keep in mind the strategies listed per week above.

The post-game is also when the Pin Ensembles will become fully available. A few of these have Ensemble abilites that come in handy during battle. Make sure to master these pins and equip them together.

In order for us to make the best articles possible, share your corrections, opinions, and thoughts about 「Pin Tier List | Best Pins to Use | NEO: The World Ends with You (NEO TWEWY)」 with us!