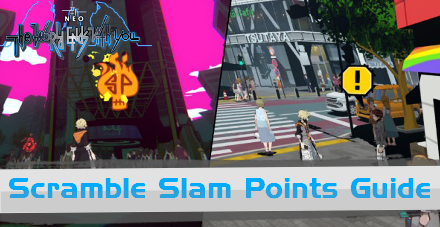 This is a guide on the Turf War in NEO: The World Ends with You (NEO TWEWY). Read on to learn how to earn Scramble Slam Points fast, how to erase Turf Noise, and reign supreme in the Scramble Slam!

How to Win Turf War

Turf Wars occur on multiple days throughout the story. The objective of the Turf War is to take control of every area (Street) accessible on that day by clearing the area of Turf Noise or defeating the enemy team. 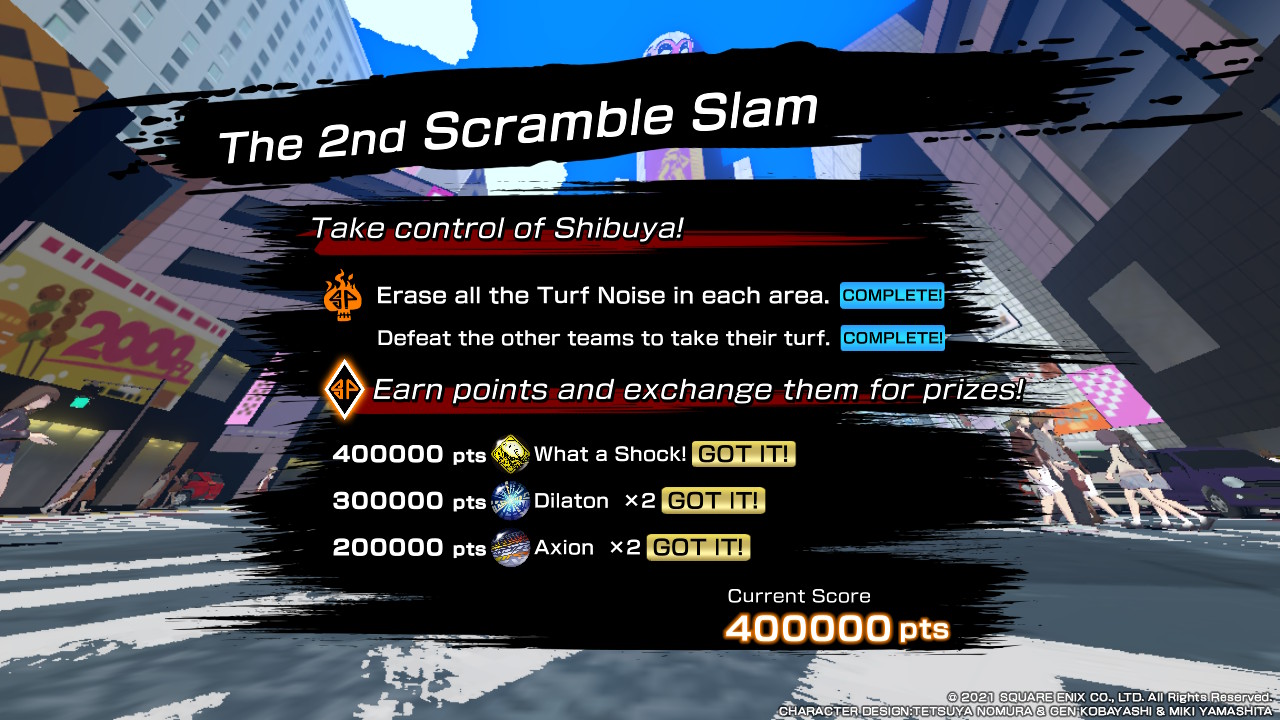 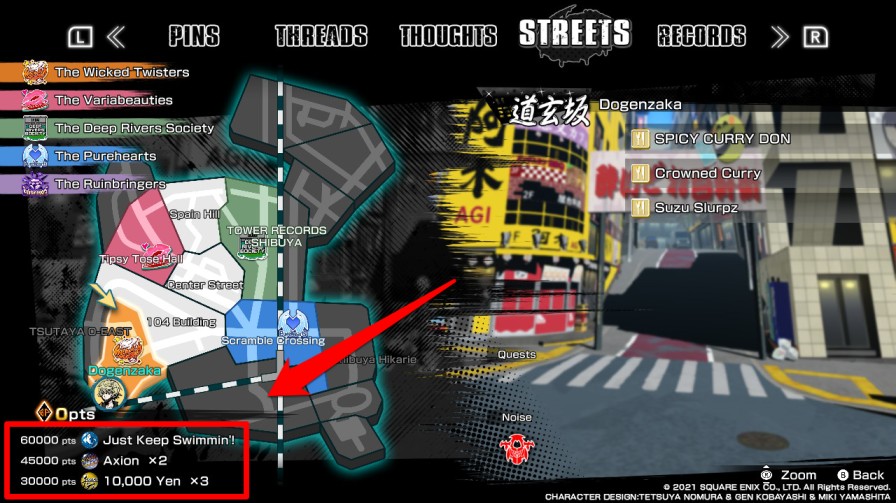 You can also view how much Scramble Points you have and how much is needed to earn a reward by going to the Streets menu, through X (Switch) or Triangle (PS4).

How to Earn Scramble Points Fast in Turf War 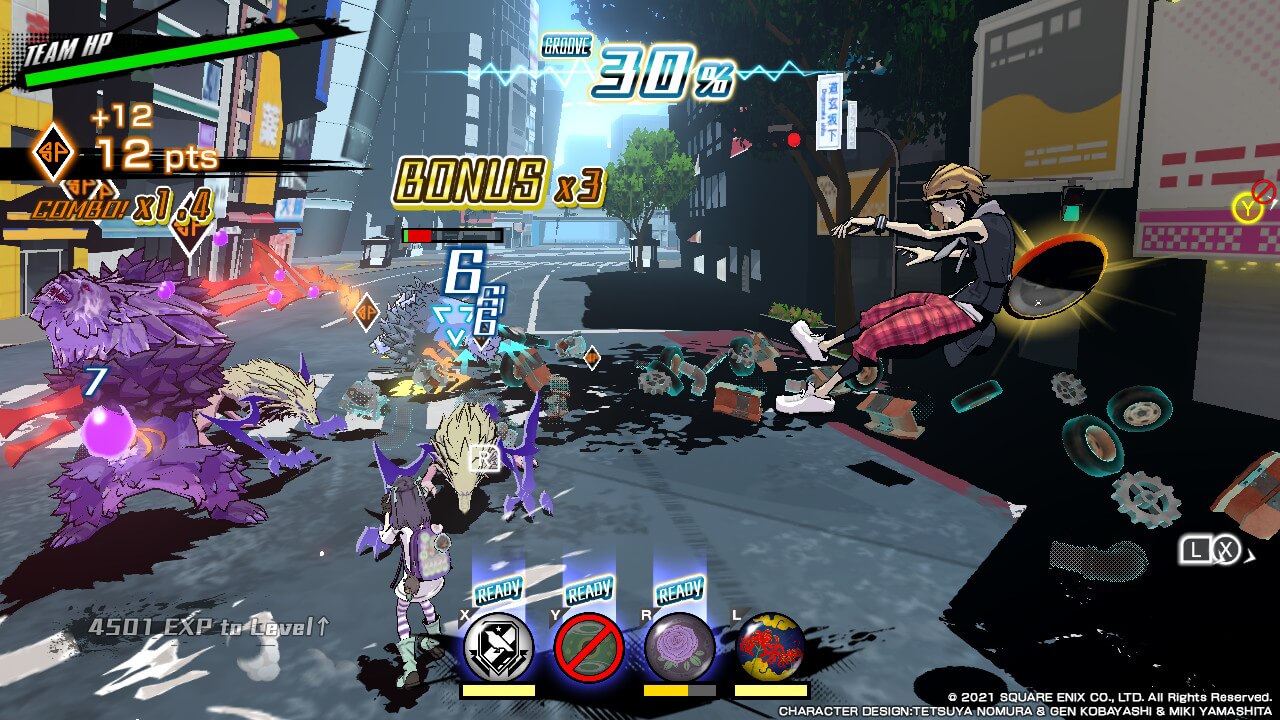 The bread and butter of earning Scramble Points is by performing Beatdrop Combos in order to raise the combo multiplier (located at the top left side of the screen during combat) to the max of x5. Each Beatdrop adds 0.4 to your multiplier, so you'll need to perform 10 Beatdrops each battle to reach the max multiplier. Afterward, defeat the enemy marked as Bonus in order to combine the two multipliers.

Build Up Beatdrop with Mashups 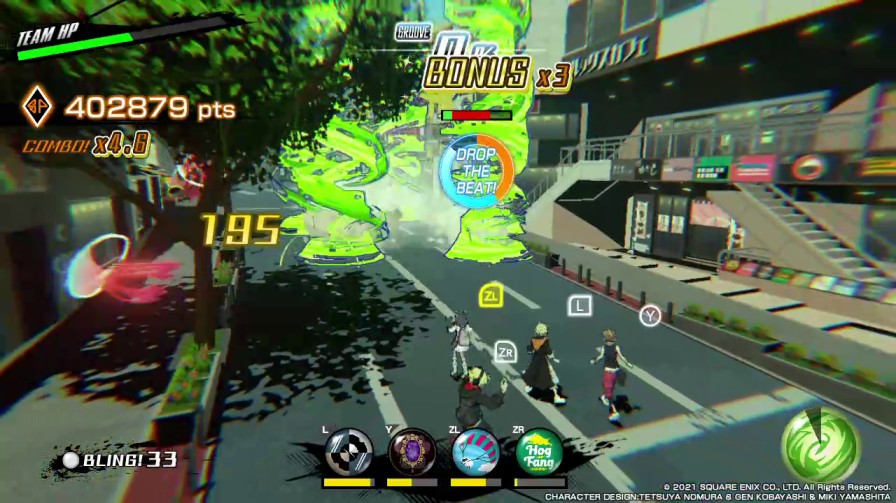 Mashups are a great way to hit a lot of Beatdrops quickly, as the Beatdrop Gauge pops up with virtually every hit. Use this to help your Scramble Point multiplier reach the max of x5. 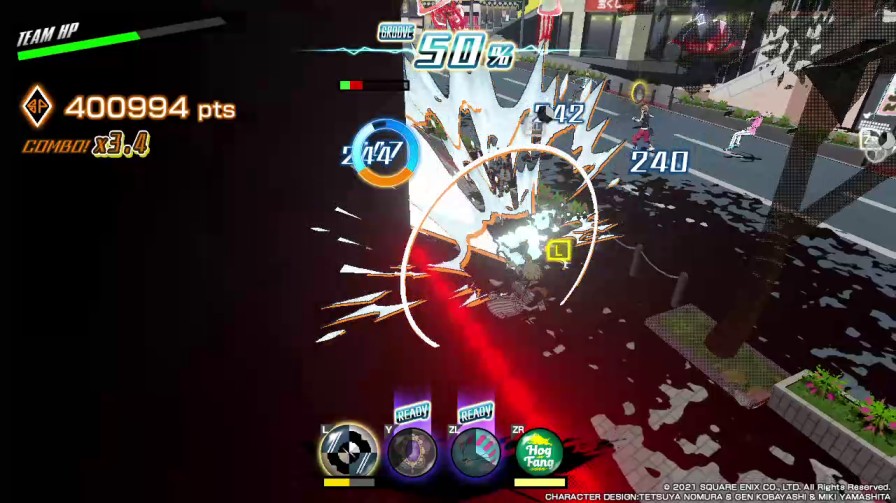 A less noticeable feature of the Scramble Points tally is that stronger finishers give more points, so have 1 or 2 Pins that deal high damage assigned to your party. Also utilize Mashups and Affinity weaknesses for finishers, as both increase your damage dealt. 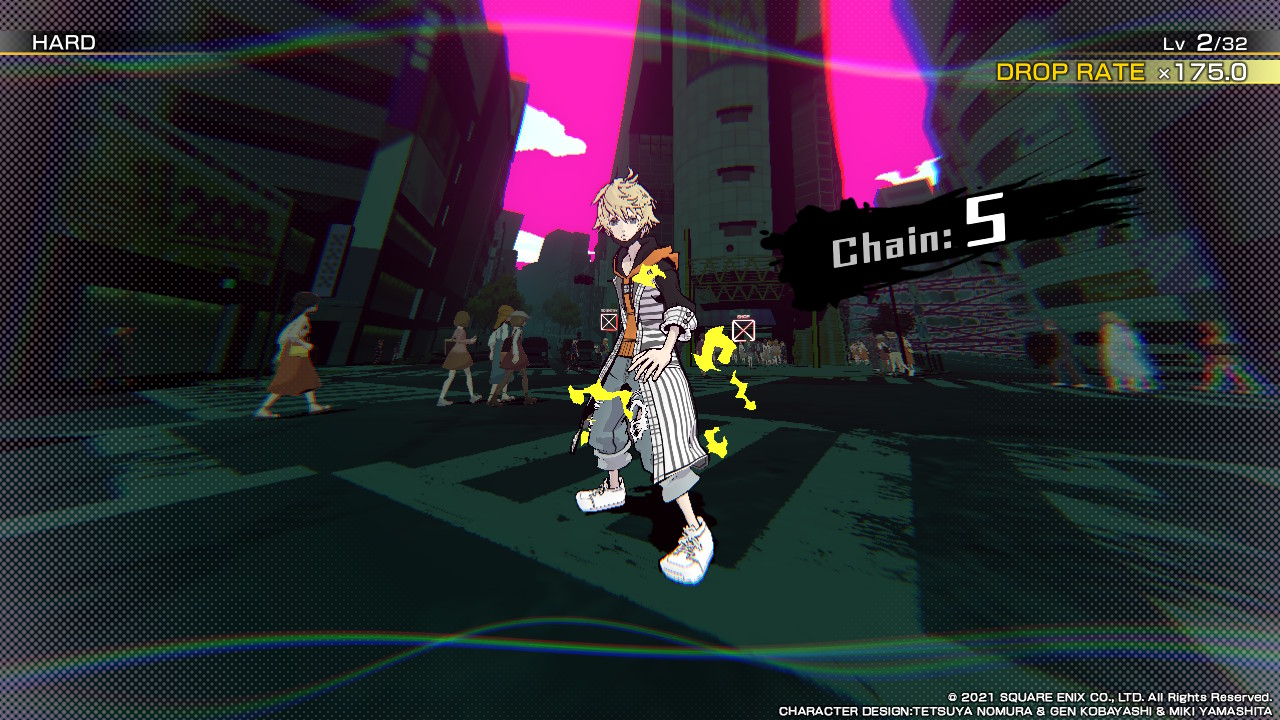 In each area of the Turf Battle, there will be regular Noise (red symbols) and either Turf Noise (orange symbols) or enemy teams (yellow !). Always chain these battles with the max number of chains afforded to you.

Strategically map out the area's Noise

For example, during the 1st Scramble Slam on Day 6, you'll only have a maximum Chain of 5 during your first playthrough. The 1st area (104 Building) has 10 regular Noise and 2 Turf Noise. Maximize your Chain by chaining together 4 regular Noise to 1 Turf Noise twice, to get the most out of the area.

In areas with enemy teams, chain together the 4 Noise, then immediately go near the enemy team (the battle starts automatically). It will say the Chain is only 4, but the enemy team isn't counted in that tally, so there will be 5 Reductions (rounds).

Purchase Chain Extenders then always use max number of chains 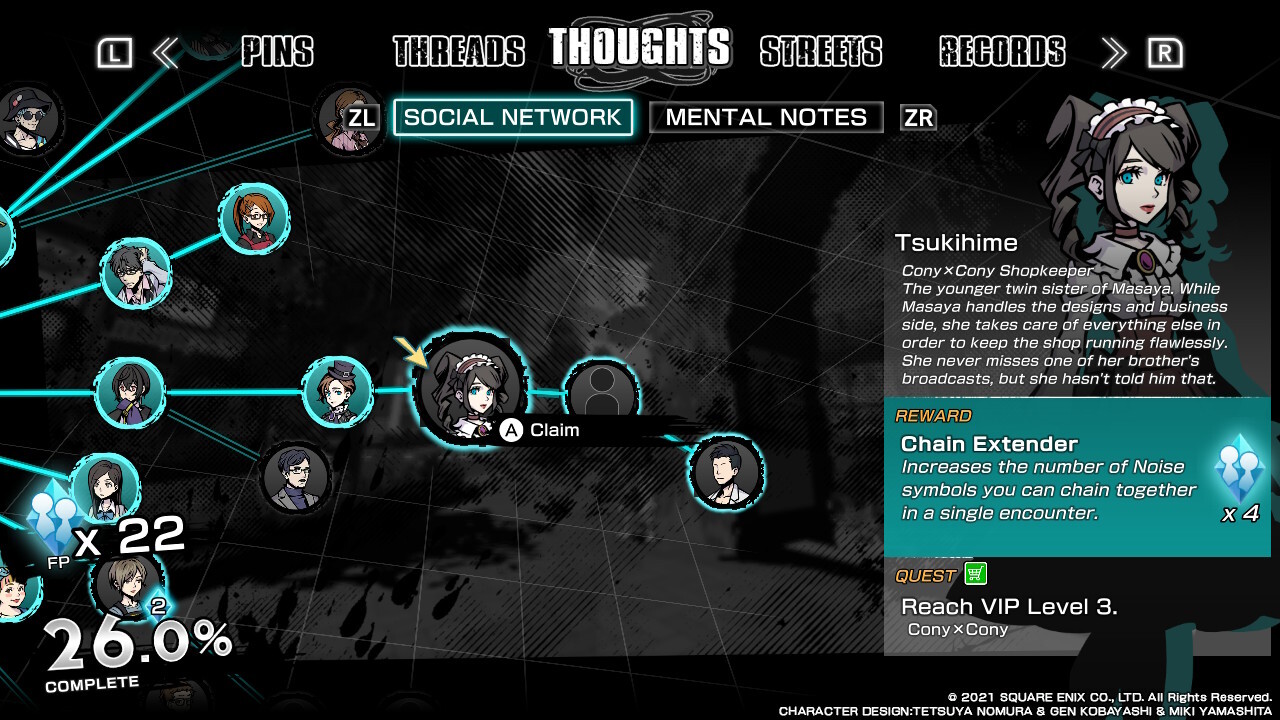 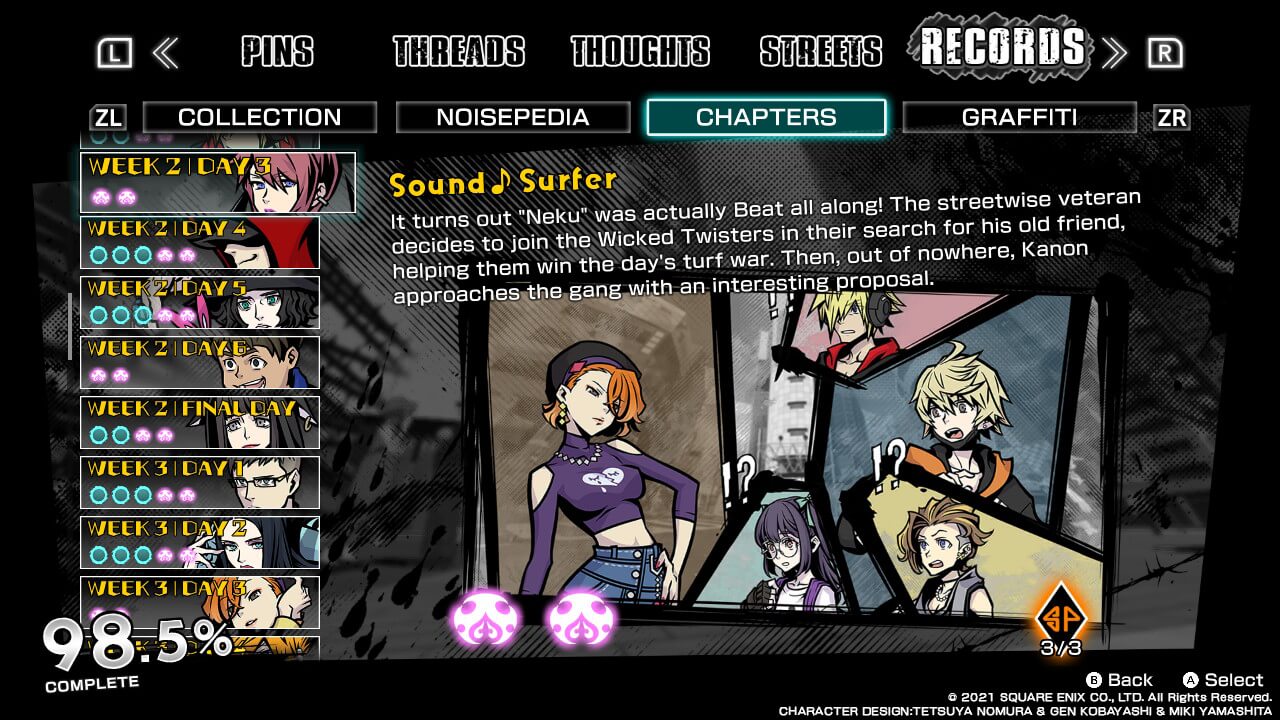 It's easier to score 400,000 Scramble Points when replaying the 2nd Scramble Slam in the post-game. You can get access to the Ultimate difficulty in the post-game, which will make enemies tougher, thus allowing you to rack up more points and build up the combo multiplier more easily.

You also can replay after purchasing Chain Extenders from the Social Network, allowing you to chain up to 20 Noise symbols. 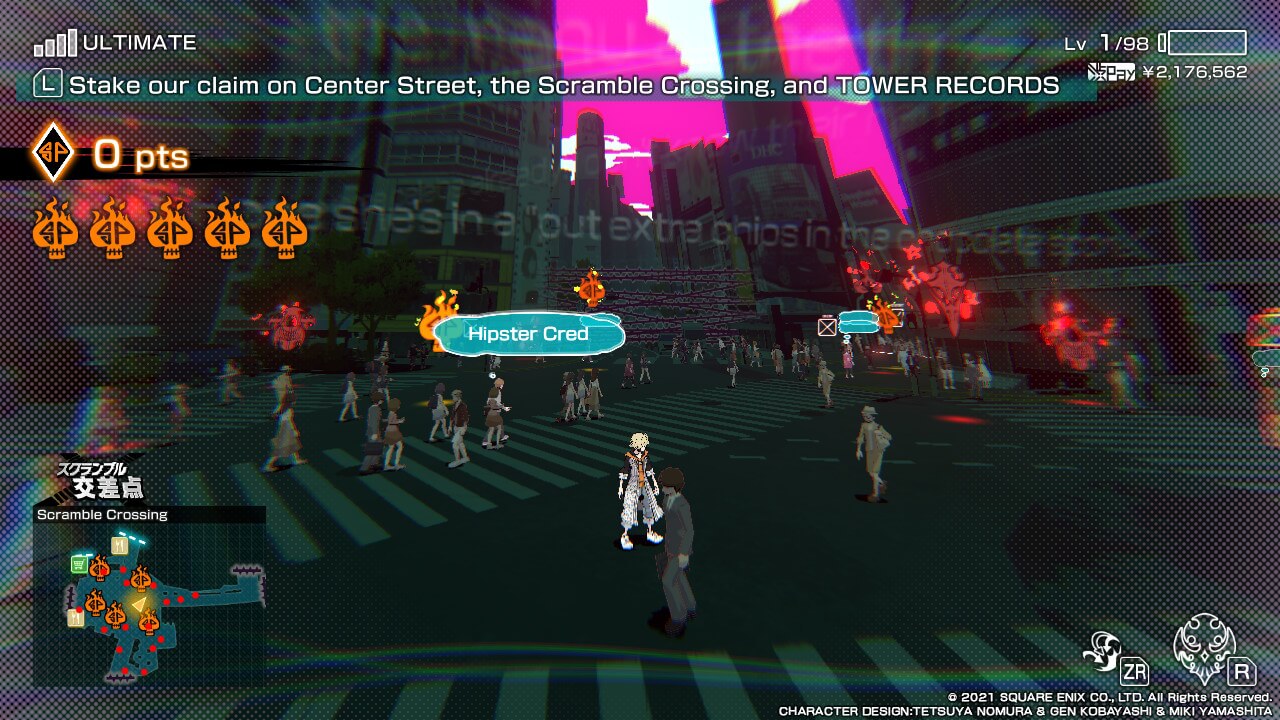 Chain 16-17 of the regular Noise symbols to each of the 5 Turf Noise in Scramble Crossing. You'll need to exit and return to the area for the regular Noise to respawn. Doing this will easily score you the 300k points in this area alone.

Should You Split up Team?

You will earn 1 Dilaton either way, if your team splits up or not, but it's recommended to not split up your team, so that you stay at your full offensive strength. Not splitting your team also lets you take over the other areas manually if you need more points, but take note that doing so will make the chapter much longer.

If you revisit the chapter and choose the option that you previously didn't, you will obtain another Dilaton.

Turf War: How to Beat the Mammoth Noise

The elephant/mammoth Noise known as Pachy R&R is a fearsome enemy faced in the early level of Day 6. In order to beat this elephant, equip a Pin with a Light, Poison, or Kinetic Affinity and avoid fighting in front of it. Additionally, it would be wise to not chain 2 of these symbols together.

Use A Mysterious Gift Pin 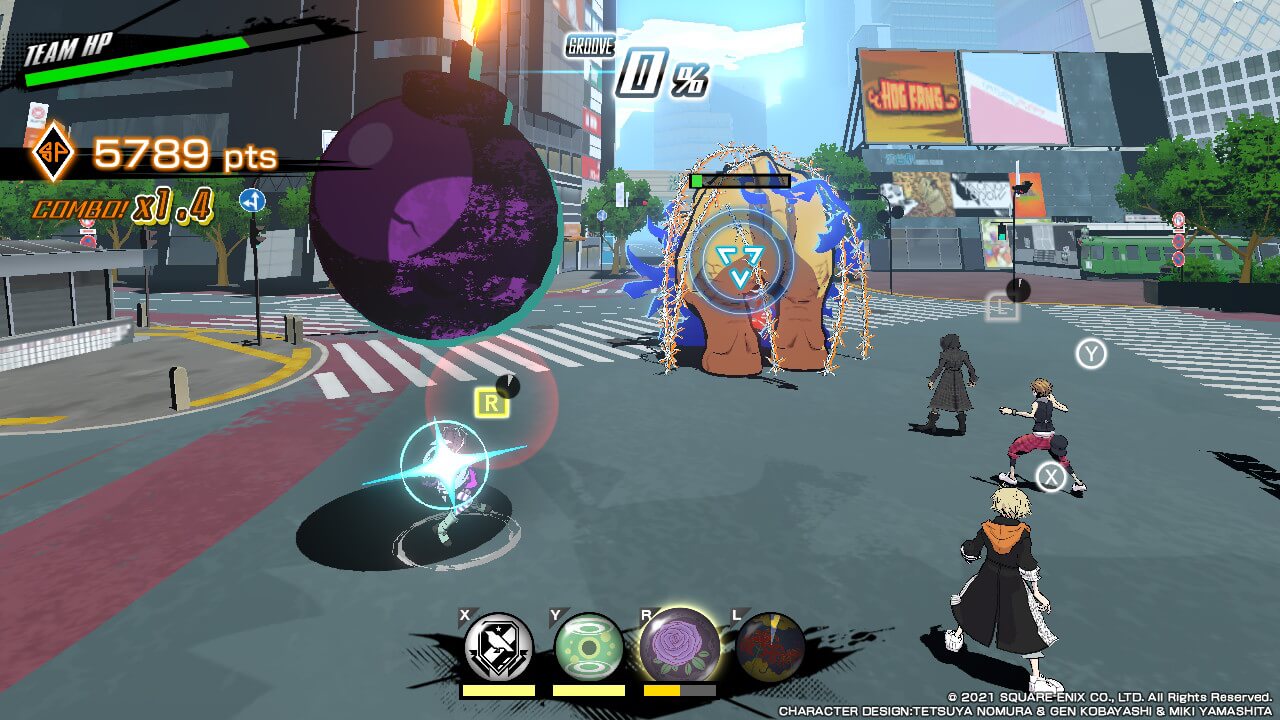 A great Pin to use when facing Pachy R&R for the first time is A Mysterious Gift. This Pin has the Poison affinity, which the elephant Noise is weak to, and it deals powerful damage. It's a bit slow to charge up, but so is Pachy R&R.

Avoid Elephant Ground Slam by Going Far From It 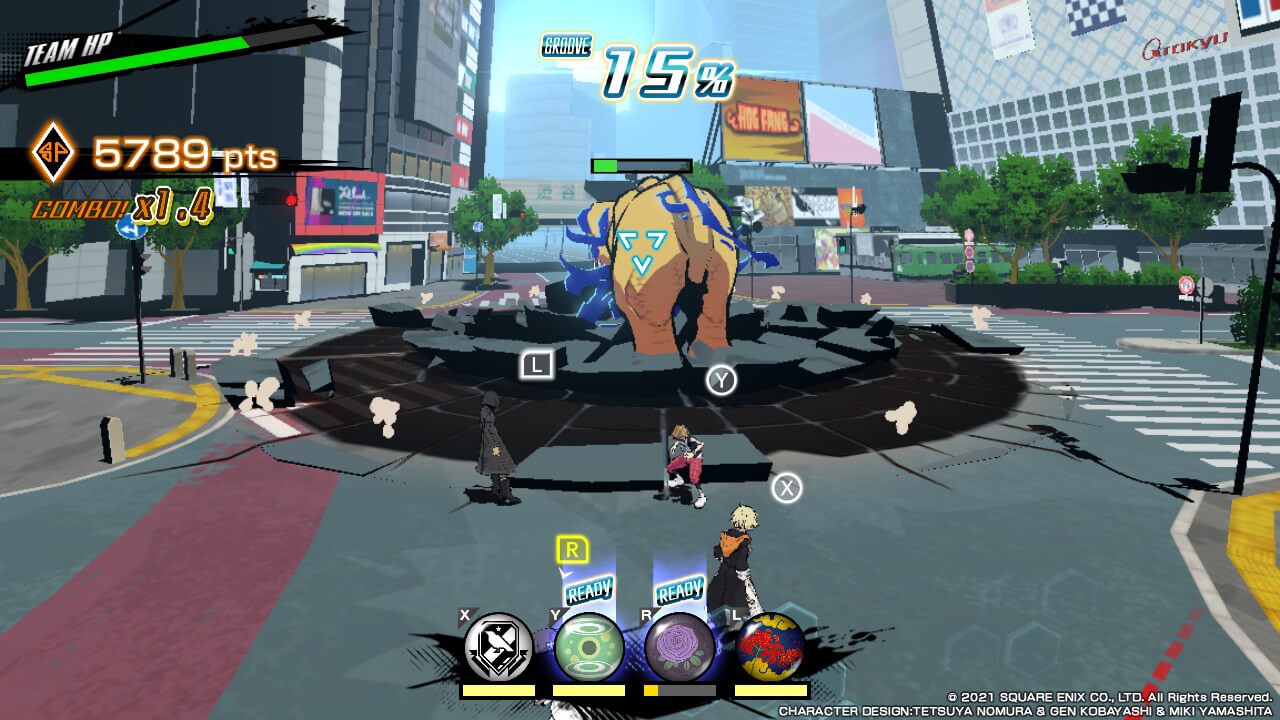 Immediately when fighting Pachy R&R, try to find the furthest corner of the combat area. Establishing this area will give you a place to retreat to when the elephant performs its ground slam (which inflicts massive damage). The ground slam always forms in waves of 3, so you'll have time to retreat.

Avoid switching characters while it Attacks

Similarly, you'll want to avoid switching characters while it's attacking with either its ground slam or laser beams. Doing so might cause you to unintentionally switch to a character within the target area of the attack.

In order for us to make the best articles possible, share your corrections, opinions, and thoughts about 「Turf War Guide: How to Earn Scramble Slam Points Fast | NEO: The World Ends with You (NEO TWEWY)」 with us!