How to Beat Plague Batrakos | Boss Fight Guide | NEO: The World Ends with You (NEO TWEWY) 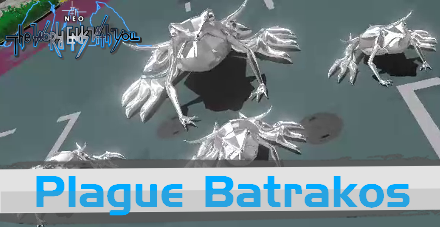 This is a guide to beating Plague Batrakos in NEO: The World Ends with You (NEO TWEWY). Learn about Plague Batrakos's attack patterns, weaknesses, and tips and strategies for defeating them.

Plague Batrakos and its Plague Frogs shoot a stream of water that reduces team HP and Groove. Water droplets form around the frogs when they start charging up the beam.

Plague Batrakos can stomp on you and inflict massive damage to your team HP and Groove.

Plague Batrakos and its Plague Frogs have the leap attack that all Frog Noise in the game have. In addition to dealing damage to team HP, these Plague Frogs also reduce your Groove upon damage dealt.

Plague Batrakos has an Affinity weakness to Ice Pins. Use Ice Pins, particularly anything that will immobilize it.

Plague Batrakos has an Affinity weakness to Ice Pins, so make sure to equip at least one in this fight. Particularly, an Ice Pin with a higher chance of freezing the enemy.

Register as a member and get all the information you want. (It's free!)
Login
Opinions about an article or post go here.
Opinions about an article or post
We at Game8 thank you for your support.
In order for us to make the best articles possible, share your corrections, opinions, and thoughts about "How to Beat Plague Batrakos | Boss Fight Guide" with us!
When reporting a problem, please be as specific as possible in providing details such as what conditions the problem occurred under and what kind of effects it had.