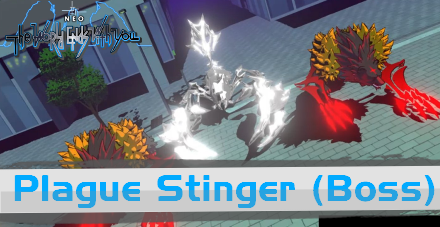 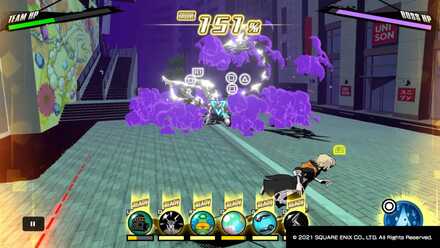 Plague Stinger (Boss) can spew poisonous gas through its stinger that can reduce your team's HP and groove if you go near it. 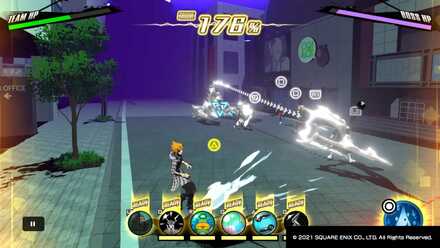 Plague Stinger (Boss) can launch its tail towards your team and sting them. Just like with poison gas, this move can damage and poison your team. It will also drain your groove quickly.

Freestyle Launcher is great against Plague Stinger (Boss) because it is weak to ice. You can also build up your groove easily with this pin and immobilize your target.

Plague Stinger (Boss)' has two Headbangin' Grizzlies to back him up during the fight. Equip Let the Rain Fall Down and Kappa Panic to fight the grizzlies from a safe distance.

Plague Stinger (Boss)' poison can drain your team's HP quickly. Having a pin like Hog Healer can help your team stay healthy during the fight.

Plague Stinger (Boss) can poison you with its attacks. This poison will continue damaging your team and draining your groove for a few seconds. With this in mind, it's better to fight it from a safe distance.

Watch Out for the Spark Before the Attack

In order for us to make the best articles possible, share your corrections, opinions, and thoughts about 「How to Beat Plague Stinger (Boss) | Boss Fight Guide | NEO: The World Ends with You (NEO TWEWY)」 with us!