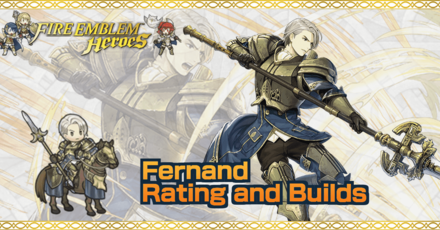 This is a ranking page for the hero Fernand - Traitorous Knight from the game Fire Emblem Heroes (FEH). Read on to learn the best IVs (Individual Values), best builds (Inherit Skill), weapon refinement, stats at Lv 40, and more for Fernand.

As a hero obtainable only through Grand Hero Battle, Fernand will always have neutral IVs by default. The only way to access IVs for this unit is through using Trait Fruits.

The best IVs for Fernand are +Atk and -HP. He can guarantee a follow-up attack thanks to Instant Lance+ so even a small chage in Atk means big damage. Additionally, his Atk is a superbane so he gets +4 Atk instead of the standard +3. This gets him +8 Atk worth of damage upon succesfully landing a follow-up attack.

We recommend a +Atk IV when merging Fernand to 10. This is for the same reasons as above. With +10 merges, Fernand's Atk stat will reach 64. This maximizes the abilities of Instant Lance+.

You can also go for +Res at +10 Merges. It is another superboon that will give him balanced defenses at this point. It will make him quite hard to take down. A +Def boon can also be taken, but +Res is the superior option.

All these are for an Instant Lance+ build, if you need him to tank, replace his default lance then +Def/+Res IVs.

This is a build designed to give Fernand the most points in Arena. These premium skills will increase his overall bulk against physical damage units, while also slowing down the triggers on their Specials through Sturdy Stance 3. Mystic Boost 3's healing will keep him healthy to be within Courtly Candle+'s trigger condition for the damage reduction, while Quick Riposte 3 will give him a guaranteed follow-up attack. Any dual Rally skill can work as his assist skill to give him maximum points.

This is a tank build for Fernand. Using Courtly Candle+'s Def refine, we can boost Fernand's Def to take less damage from physical attacks. Sol and Mystic Boost's healing will ensure he stays within the trigger conditions of his weapon. Distant Counter and Quick Riposte 3 will give him a follow-up attack when attacked by bows and dagger units, while Atk Smoke 3 will debuff enemy units.

This is a budget offensive build for Fernand with his base kit and minimal skill inheritance. We can take advantage of his high Atk and give him Death Blow and Atk/Def Solo 3 to boost his firepower.

Note: Fernand's stats will always have no IVs.

Fernand is a close physical attacker (range = 1). Therefore, when not accounting for the Weapon Triangle, the amount of damage he deals will be equivalent to his Atk minus the foe's Def stat.

This improves his matchups against physical units and counters skills like Quick Riposte 3.

Fernand can debuff enemy units within 2 spaces at the start of the turn, giving them Atk/Def-4. This helps him in dealing damage and potentially one-shotting his targets.

Though Fernand debuts with Instant Lance+, you can make an argument that this lance is better off with another unit. If you are to make use of him in the long run, we suggest inheriting powerful skills onto him to help him contribute to your team more.

We also recommend getting merges whenever possible. Merges are quite easy to obtain on him as he will be available from the Heroic Grail shop.

Fernand takes 1.5x damage from cavalry-effective weapons like Ridersbane or a Wolf weapon like Rauðrwolf+, and one blow from this type of weapon is sure to take him down. Make sure you know what weapons you are up against before hopping too far into the line of battle!

Fernand - Traitorous Knight Only Appears as a 5 Star Hero!

Fernand as a Source Hero

All of Fernand's skills have inheritance value!

How to Get Fernand / Illustrations / Voice Actor / Quotes

How to Get Fernand

Fernand is a Hero who, for a limited time, can be obtained through completing a Grand Hero Battle for the first time. They do not appear in regular summons. After the event has ended, they can be obtained by using Heroic Grails.

Register as a member and get all the information you want. (It's free!)
Login
Opinions about an article or post go here.
Opinions about an article or post
We at Game8 thank you for your support.
In order for us to make the best articles possible, share your corrections, opinions, and thoughts about "Fernand Builds and Best IVs" with us!
When reporting a problem, please be as specific as possible in providing details such as what conditions the problem occurred under and what kind of effects it had.