This is a ranking page for the hero Dozla - Harvest Attendant from the game Fire Emblem Heroes (FEH). Read on to learn the best IVs (Individual Values), best builds (Inherit Skill), weapon refinement, stats at Lv 40, and more for Dozla. 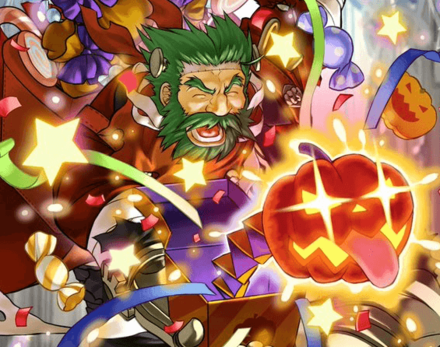 The best IVs for Dozla are +Atk and -HP. A +Atk IV helps him improve on dealing damage against foes. Take note that his Atk is a superboon so you should take advantage of it as much as possible as it gives you +4 instead of +3 Atk. His HP is of less importance so it is safe to take as a bane.

Dozla is a ranged physical attacker (range = 2). Therefore, when not accounting for the Weapon Triangle, the amount of damage he deals will be equivalent to his Atk minus the foe's Def stat.

Weapon has a built-in effect similar to Fury 3

Pumpkin-a-Box+ Grants +3 to all stats, but deals 6 damage to unit every time Dozla exits combat. This is the same effect as Fury 3! A good statline allows him to be deadly in both phases, but make sure to pair him up with healers to make up for the after-combat damage. Reyson or Leanne also makes a great support unit for Dozla as they are both dancers that provide passive healing.

If Dozla is adjacent to other armored units, Dozla and said units can move 1 extra space for that turn. It is somewhat pretty easy to trigger and it greatly improves the mobility of all armored allies. Another quirk of Armor March 3 is you can move to those tiles even if they are forests similar to how flying movement works.

Dozla takes 1.5x damage from armor-effective weapons like Armorslayer+, and one blow from this type of weapon is sure to take him down. Make sure you know what weapons you are up against before hopping too far into the line of battle!
Heroes with Effective Skills

Should you Unlock Potential for Dozla?

Dozla - Harvest Attendant Only Appears as a 5 Star Hero!

Dozla as a Source Hero

Dozla can be used to inherit the skills Armor March 3 or AR-D Atk/Def 3. Take note that Dozla is a 5★ exclusive character so think carefully before fodderring him off!

How to Get Dozla / Illustrations / Voice Actor / Quotes

Dozla is a limited time Hero who can be pulled from a Special Heroes Summoning Event. They do not appear in regular summons.

Register as a member and get all the information you want. (It's free!)
Login
Opinions about an article or post go here.
Opinions about an article or post
We at Game8 thank you for your support.
In order for us to make the best articles possible, share your corrections, opinions, and thoughts about "Dozla Builds and Best IVs" with us!
When reporting a problem, please be as specific as possible in providing details such as what conditions the problem occurred under and what kind of effects it had.