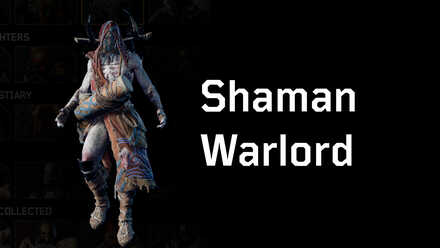 While not the strongest of Ferals in brute strength, the Shaman Warlord is the most capable at manipulating the Anomaly's power to deadly effect. In contrast to most other Ferals, they wear little protective gear, and depend more on their powers to prevent injury.

This fight is not a sprint, it's a marathon. Winning requires mastery of positioning, timing, and reflexes. Treat it as a training ground for when you face the Final Boss.

Unlike most Elites you've fought so far, the Shaman Warlord is a rare exception from Elites that come at you with gunfire or melee attacks.

If you have gear with these Shards, we recommend to max them out, especially Status Power before facing the Shaman Warlord.

As mentioned, this fight is a marathon. These Mod-sets were selected to deal heavy damage over time. 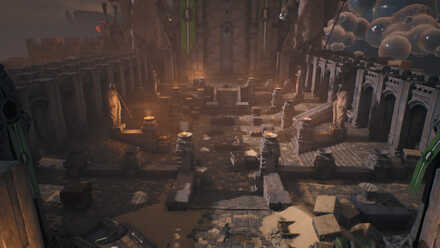 Here is an overview of the battle field. Berserkers will charge at you from the center, but the center is a deadman's zone.

The right wing has blockades where enemy groups could trap you. The left wing is free from any obstruction and holds the Ammo Stockbox at the end of the hall.

Berserkers will be the first ones to charge at you. Eliminating them at once should be the top of your to-do list every time they are spawned. Some of these Berserkers inflict Freeze and most of them inflict Bleed on contact.

Once the Warlords are spawned, your priority will change. Eliminate the two Warlords before they have a chance to use Stone Skin Aura and reinforce the Armor of every Feral in the field.

Overload works in the same way as Moloch's Solar Blast. The difference is that Shaman Warlord not only sets up an anomaly barrier as he charges the attack, but also follows your movement as he charges it.

If you have successfully eliminated the Berserkers, you can use the obstructions in the field as shield covers to wait out the attack unharmed.

Grasping Shock is a wide AoE attack that temporarily incapacitates your character if caught in its zone. Shaman Warlord will spam this attack along with Anomaly Rifts, making this fight a real "dance of death".

Shaman Warlord summons an Anomaly rift that shoots out Anomaly Energy. These floating blue orbs can take a lot of gunfire, but most Anomaly-based atttacks are more effective in destroying it.

However, you don't have to waste bullets or time (on skill cooldowns) on it since it disappears after 25 seconds. You only need to keep out of sight from it so it can't shoot at you.

Using the pillars on the left wing as shielding, position yourself so that you can take aim at the Shaman Warlord but the Anomaly Rift can't take aim at you.

Register as a member and get all the information you want. (It's free!)
Login
Opinions about an article or post go here.
Opinions about an article or post
We at Game8 thank you for your support.
In order for us to make the best articles possible, share your corrections, opinions, and thoughts about "How to Beat Shaman Warlord | Boss Fight Strategy Guide " with us!
When reporting a problem, please be as specific as possible in providing details such as what conditions the problem occurred under and what kind of effects it had.