This is a guide to building the Ash Breaker, a Pyromancer Build in the game Outriders. To learn about the weapon, gear, and mods for the Ash Breaker Build, read on.

This versatile Pyromancer build specializes in maximizing your DPS and your ability to control enemies by focusing on your Ash status effect.

Ash Blast turns enemies around you into Ash. Pair it with the Death Sentence and Ash Increase Range mods to maximize the skill's full potential.

Volcanic Rounds buffs your bullets with the Burn effect. Mark enemies or use any of the other two skills mentioned and then blast them with your Burn-infused gun for maximum destruction.

Eruption is a powerful skill that creates a volcanic eruption beneath an enemy. With the Improved Damage and Giga Blast mods, you can annihilate heavy enemies with just one use. 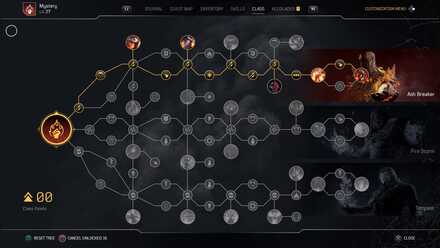 The Ash Breaker build is all about increasing your weapon damage and utilizing your Immobilize skills to their fullest. Start the path by acquiring nodes that will increase the damage you inflict against enemies (Inferno Weapon, Mark of the Anomaly, Trial of the Ashes).

Then, invest in nodes that will improve your Immobilize skills (Marble Orchard, Hot SItuation, Burning Situation). This will allow you to use them more often to control and displace enemies around you, as well as having a reliable healing system.

Finally, choose a Master node depending on the type of gun you're accustomed to. That way, you can save a few class points to acquire other nodes that you might personally need that are not on this build.

Weapons with the three attributes listed are best equipped for the Ash Breaker build.

Armor with the three attributes listed are best equipped for the Ash Breaker build.

In order for us to make the best articles possible, share your corrections, opinions, and thoughts about 「Best Ash Breaker Build for Pyromancer | Outriders」 with us!