How to Beat the Chrysaloid | Boss Fight Strategy Guide | Outriders 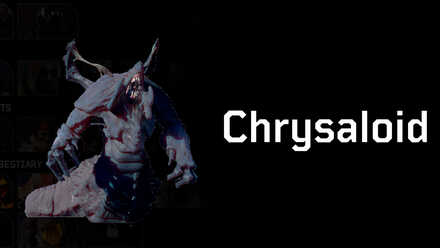 This is a guide to beating the Chrysaloid in Mayhem in the game Outriders. This article provides information on Chrysaloid, as well as tested strategies for beating them.

A giant of the Forest that shakes the ground with its every movement. Among Enoch's largest witnessed creatures, the Chrysaloid reaches the heigh of a skyscraper, slamming its enormous arms like wrecking balls, tearing up and throwing mountains and trees.

During the first stage, position yourself on a corner to avoid the Chrysaloid's Fire Breath (indicated by a long red vertical zone).

Whenever you see that giant arm, roll to the back of the field to be out of reach from the Chrysaloid's attack.

When the Chrysaloid climbs the the structure, change your camera angle to view where the rocks are, then evade.

Aim for the Heart

The Chrysaloid's weak spot is its fleshy throat area. Overtime, this part gets more damaged as your shoot at it. We recommend Burning Bullets or Improved Burning Bullets as these Status Effects deal the most base damage over time.

After depleting its first health bar, the fight will move to a different area. At close range, the safest spot is directly under the Chrysaloid itself. This position exposes its vulnerable heart for Critical damage. When the opportunity arises, take it.

If you see the Chrysaloid retreating, toggle off your ADS and get a wider view of the area. This will help you navigate where the rocks will fall on.

Strixes will appear from time to time to menace you. Killing these bugs can be tricky as they are very agile in the air. However, their attack pattern leaves a brief opening for critical shots.

When a Strix is about to launch a ranged attack, it will expose its belly. Focus your fire on that area to kill them quickly.

Observe when the Chrysaloid goes into a higher platform . This is the same Fire Breath attack it used in Stage 1. Steer clear of the red zone, and continue attacking once it gets down.

Use Status Effect mods that inflict Status Conditions because this will be lengthy fight, especially on higher world tiers.

In order for us to make the best articles possible, share your corrections, opinions, and thoughts about 「How to Beat the Chrysaloid | Boss Fight Strategy Guide | Outriders」 with us!