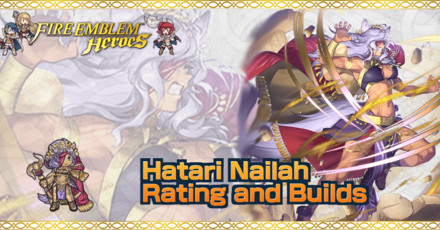 This is a ranking page for the hero Nailah - Hatari Scorcher from the game Fire Emblem Heroes (FEH). Read on to learn the best IVs (Individual Values), best builds (Inherit Skill), weapon refinement, stats at Lv 40, and more for Hatari Nailah.

You can also opt for a +Atk IV because of her Superboon, which allows her to hit harder.

We recommend a +Spd IV when merging Nailah to 10. This is for the same reasons as above. With this IV at 10 merges, she reaches a Spd of 48. At that point, she will be scoring follow-up attacks on a wide range of units especially when coupled with her weapon's effect.

Hatari Nailah's base kit is already pretty complete so we just need a positional Assist on her and Blade Session 3 to further up her offensive power.

Hatari Nailah is a close physical attacker (range = 1). Therefore, when not accounting for the Weapon Triangle, the amount of damage she deals will be equivalent to her Atk minus the foe's Def stat.

This makes her a powerhouse of a unit, as she has several effects to enable one-shots, even when she's not transformed.

Exclusive A Skill Grants Even More Buffs and Heals

Hatari Nailah comes with Sturdy Surge, a Passive A skill that gives her Atk+7 and Def+10 during combat.

Additionally, if she deals damage with a Special, even if 0 damage is dealt, she'll heal herself equal to the amount of her Special's cooldown value x 20, +10.

This means that if she's using Luna, Nailah will recover 70 HP.

Glare makes it hard for enemies to engage and disengage

This skill inflicts a status on the target that limits their movement to 1 space until their next action.

With all the mobility granted by Legendary Sigurd and units like Brave Alm and Yuri, this makes this a good skill to keep them in check.

Nailah makes for a decent defense unit on AI-controlled teams as it makes it hard for the player to disengage Nailah after they have committed to the danger zone.

Nailah takes 1.5x damage from beast-effective weapons like Brave Eliwood's Nini's Ice Lance, and one blow from this type of weapon is sure to take her down. Make sure you know what weapons you are up against before hopping too far into the line of battle!
Heroes with Effective Skills

However, the same cannot be said for her Res. She will be taking more damage from blue tome units and is also vulnerable to any dragon's adaptive damage.

Nailah - Hatari Scorcher Only Appears as a 5 Star Hero!

Hatari Nailah as a Source Hero

Nailah can be used to inherit the skills Sturdy Surge and Lull Spd/Def 3. However, Nailah is a powerful unit with valuable skills, so think carefully before foddering her off.

How to Get Hatari Nailah / Illustrations / Voice Actor / Quotes

How to Get Hatari Nailah

Hatari Nailah is a limited time Hero who can be pulled from a Special Heroes Summoning Event. They do not appear in regular summons.

Post (0 Comments)
Opinions about an article or post go here.
Opinions about an article or post
We at Game8 thank you for your support.
In order for us to make the best articles possible, share your corrections, opinions, and thoughts about "Hatari Nailah Builds and Best IVs" with us!
When reporting a problem, please be as specific as possible in providing details such as what conditions the problem occurred under and what kind of effects it had.