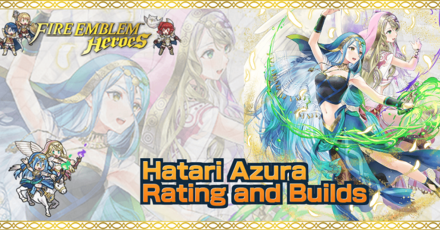 This is a ranking page for the hero Azura - Hatari Duet from the game Fire Emblem Heroes (FEH). Read on to learn the best IVs (Individual Values), best builds (Inherit Skill), weapon refinement, stats at Lv 40, and more for Hatari Azura. 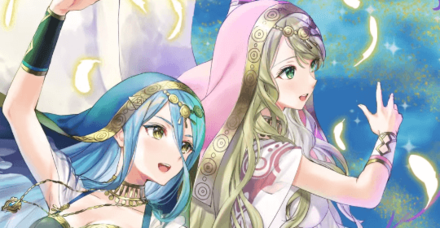 You can also opt for a +Atk IV because of her Superboon, which allows her to hit harder.

We recommend a +Spd IV when merging Azura to 10. This is for the same reasons as above. With this IV at 10 merges, she reaches a Spd of 51.

With her already high Atk, she will be one-shotting many different types of units.

This build makes Hatari Azura an offensive unit, while still serving her role as a dancer. Her kit is already pretty complete, so just give her a low cooldown Special like Moonbow and your choice of Sacred Seal. We opted for the more damage-oriented Blade Session 3 to augment her offensive capabilities.

Hatari Azura is a ranged magic attacker (range = 2). Therefore, when not accounting for the Weapon Triangle, the amount of damage she deals will be equivalent to her Atk minus the foe's Res stat. 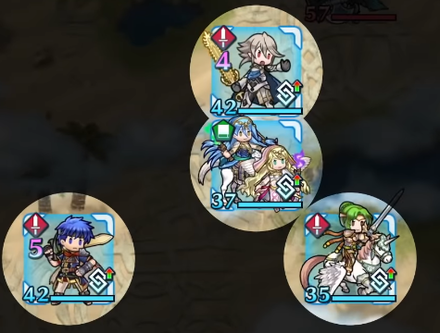 Her Harmonized Skill grants the following to the qualified allies:

Additionally, it grants another action to the ally with the highest HP who has already acted. It can affect units that have Sing/Dance, but the unit has to be from the same titles as either Azura or Leanne. Additionally, the unit to be refreshed must be within 2 spaces.

You can read the in-game text for Hatari Azura's Harmonized Skill and the duel component in this section!

If Hatari Azura uses Gray Waves, Dancing Flames grant +6 to all stats to all adajcent allies for 1 turn. A +6 bonus to all stats on all adjacent allies shouldn't be overlooked! Pay attention to her positioning in relation to her allies to make the most out of this buff.

Increases her allies mobility with her exclusive skill

Her exclusive assist Gray Waves allows the target to move 1 extra space when she refreshes their movement, as long as they are infnatry or flying. It goes without saying that this will be useful practically anywhere, but it really shines in its applicability for Arena Battles, Aether Raids, and Resonant Battles!

We do not have her stats yet, but she's looking to be a threat as an offensive unit as well. Consider slapping a Special on her, and she can be a reliable attacker too!

This skill grants Res+5 to allies in cardinal directions of her during combat, meaning that this buff can reach far across the map as long as her teammates stay within those zones.

It is easy to imagine the value of this in bigger maps such as Resonant battles, but of course it doesn't fade in value in maps like Aether Raids or the Arena where getting Res buff on your frontliners is invaluable.

However, the same cannot be said for her Res. She will be taking more damage from red tome units and is also vulnerable to any dragon's adaptive damage.

Hatari Azura is mainly a refresher-assist support who can compound a powerful unit's firepower so pairing her up with your most powerful units is your best bet for her!

Her Res is pretty low compared to her Def, so get your hard hitting red and green tome units together for a party!

This is double deadly when using any version of Micaiah due to her cavalry-effective weapons.

Azura - Hatari Duet Only Appears as a 5 Star Hero!

Hatari Azura as a Source Hero

How to Get Hatari Azura / Illustrations / Voice Actor / Quotes

How to Get Hatari Azura

Hatari Azura is a limited time Hero who can be pulled from a Special Heroes Summoning Event. They do not appear in regular summons.

Post (0 Comments)
Opinions about an article or post go here.
Opinions about an article or post
We at Game8 thank you for your support.
In order for us to make the best articles possible, share your corrections, opinions, and thoughts about "Hatari Azura Builds and Best IVs" with us!
When reporting a problem, please be as specific as possible in providing details such as what conditions the problem occurred under and what kind of effects it had.