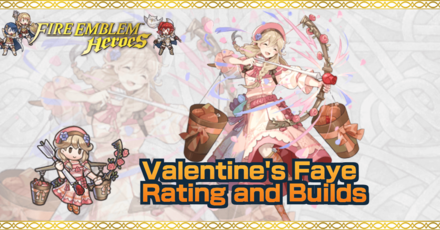 This is a ranking page for the hero Faye - Drawn Heartstring from the game Fire Emblem Heroes (FEH). Read on to learn the best IVs (Individual Values), best builds (Inherit Skill), weapon refinement, stats at Lv 40, and more for Valentine's Faye. 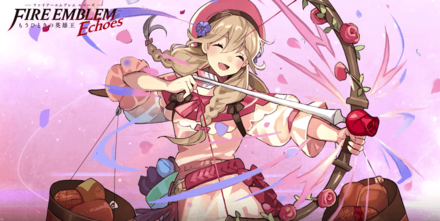 Faye's best IVs are +Atk and -Spd. Since Bold Fighter grants Faye a guaranteed follow-up, an Atk boon will let her dish out m+6 extra damage. Her Spd is nothing special, and can safely be taken as a flaw.

If you are planning on making a +10 merge Faye, we recommend +Atk. With 10 merges and an asset in Atk, plus the bonus from her weapon skill, her Atk stat will grow to 59, giving her exceptional offensive capability. If you instead want to build her tanking ability, +Def is a good choice as well.

Valentine's Faye's weapon cannot currently be refined. This section will be updated if it becomes refineable in the future!

V!Faye is a ranged physical attack phase unit (range=2). Therefore, when not accounting for the Weapon Triangle, the amount of damage she deals will be equivalent to her Atk minus the foe's Def.

Can grant extra mobility to other armored allies

Faye has the C skill Armor March 3 by default. This is essential to any armored party, as it allows both her and adjacent armored allies to move an extra space. In this way, she can both support her other allies while making use of the bonus on her own as well.

Skills do not trigger when the foe initiates combat

Valentine's Faye's default skills only have an effect when she initiates combat, so they will not trigger in the enemy phase. With her base skillset, she is not really cut out to be a tank, and should instead thrive in the player phase.

As an armored unit, Faye will take 1.5x damage from weapons that are effective on armored units, such as Armorslayer. Be sure and check what weapons your opponents are using beforehand.

Should you Unlock Potential for Valentine's Faye?

Faye - Drawn Heartstring Only Appears as a 5 Star Hero!

Valentine's Faye as a Source Hero

Valentine's Faye can be used to inherit Bold Fighter or Armor March. If you have that hero learn Death Blow 1-3 from another unit beforehand, you can have them inherit Death Blow 4 as well. These are all excellent skills, but as Valentine's Faye is a rare Special Hero, think hard about your decision before you recklessly fodder her off.


How to Get Valentine's Faye / Illustrations / Voice Actor / Quotes

How to Get Valentine's Faye

Valentine's Faye is a limited time Hero who can be pulled from a Special Heroes Summoning Event. They do not appear in regular summons.

Register as a member and get all the information you want. (It's free!)
Login
Opinions about an article or post go here.
Opinions about an article or post
We at Game8 thank you for your support.
In order for us to make the best articles possible, share your corrections, opinions, and thoughts about "Valentine's Faye Builds and Best IVs" with us!
When reporting a problem, please be as specific as possible in providing details such as what conditions the problem occurred under and what kind of effects it had.