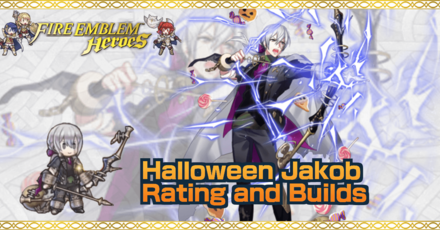 This is a ranking page for the hero Jakob - Devoted Monster from the game Fire Emblem Heroes (FEH). Read on to learn the best IVs (Individual Values), best builds (Inherit Skill), weapon refinement, stats at Lv 40, and more for Halloween Jakob.

The best IVs for Halloween Jakob are +Atk and -Spd. This allows him to directly increase the damage he deals. His Spd is not of importance as it is unreliable and Wary Fighter 3 already takes care of follow-up attack protection. The mentioned skill also disables his ability to nail follow-up attacks so this makes Spd very very unimportant.

We recommend a +Atk IV when merging Halloween Jakob to 10. This is for the same reasons as above. If you plan to replace his B skill with something like Vengeful Fighter 3, you can go for a +Def or +Res IV depending on your needs instead.

Halloween Jakob is a ranged magic attacker (range = 2). Therefore, when not accounting for the Weapon Triangle, the amount of damage he deals will be equivalent to his Atk minus the foe's Res stat.

Halloween Jakob is both a bow user and an armored unit and that is a very rare combination. This allow him to fill-in specific niches as he hits harder and is more durable compared to other bow users. The only downside is his limited mobility which can be fixed through proper skills, Seals and synergy with allied units.

His colorless nature can also be used to an advantage as it means he will not take extra attribute damage if the foe does not have a Raven weapon like the very powerful Tome of Order.

Because of his ability to fill-in a very specific niche as a bow armored unit, he can make for a good unit in an all-armored team especially with some investment.

Naturally high stats and Wary Fighter make him great on the defensive front too!

This is mostly a defensive skill. If you prefer a more offensive build, you can opt for Bold Fighter 3 or Vengeful Fighter 3. Check out the builds section to learn more about these skills and how you can integrate them onto Jakob's kit.

Halloween Jakob enjoys the high stats of an armored unit, but this means that he suffers from armored movement as well. Without the use of proper Sacred Seals like Armored Boots and skills like Armored March 3, he will be crippled by very limited movement. It will be most likely that the enemy will get to him first before he is able to initiate. If that is the case, he will be unable to trigger Bracing Blow 2.

Another option is to get Guidance 3 if you plan to run him in mixed teams. With this skill and his ranged, you will have a moderately easy time initiating on enemies.

Halloween Jakob takes 1.5x damage from armor-effective weapons like Armorslayer+ or Hammer+, and one blow from these types of weapons is sure to take him down. Make sure you know what weapons you are up against before hopping too far into the line of battle!

Should you Unlock Potential for Halloween Jakob?

Jakob - Devoted Monster Only Appears as a 5 Star Hero!

Halloween Jakob as a Source Hero

Halloween Jakob does not possess any skills that are worth inheriting onto another unit. We recommend training and investing in him instead. If you get multiple copies of him, you can aim for a +10 merge Halloween Jakob to make a very reliable armored bow unit.

How to Get Halloween Jakob / Illustrations / Voice Actor / Quotes

How to Get Halloween Jakob

Halloween Jakob is a limited time Hero who can be pulled from a Special Heroes Summoning Event. They do not appear in regular summons.

Register as a member and get all the information you want. (It's free!)
Login
Opinions about an article or post go here.
Opinions about an article or post
We at Game8 thank you for your support.
In order for us to make the best articles possible, share your corrections, opinions, and thoughts about "Halloween Jakob Builds and Best IVs" with us!
When reporting a problem, please be as specific as possible in providing details such as what conditions the problem occurred under and what kind of effects it had.