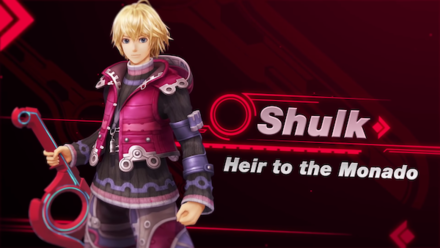 This is a profile and usage guide for Shulk, a character from Xenoblade Chronicles: Definitive Edition for the Nintendo Switch. Here you can find Shulk's roles, builds, stats at Lv. 99, best Arts, best skill trees, and official artwork.

Shulk is the protagonist of the story. He lives in Colony 9, where he spends his time researching the Monado, a powerful but mysterious blade that is capable of damaging Mechon armor. Shulk later gains control of the Monado, and is able to hone its power to see into the future.

How to Play Shulk

A very beginner friendly character, and highly recommended for newcomers. Shulk excels in position based Arts, meaning that you'll need to use attacks like Slit Edge, Back Slash, and Air Slash to target the sides/backs of enemies. To really get the most out of these attacks, it is essential that you have a tank on your team such as Reyn or Dunban, who can draw the enemy aggro out, allowing Shulk to get out of the enemy's line of sight and use these arts on enemy sides/backs to charge the party gauge and deal heavy damage.

A good combat starting strategy is to attack the enemy, use Shadow Eye to lower aggro and raise physical arts, strike the enemy's side with Slit Edge to lower defense, then attack from behind with Backslash for massive damage. Be sure and level up these Arts as quickly as possible, along with Air Slash for its ability to inflict break/slow and charge the party gauge, as well as Monado Buster/Shield/Enchant for their usage against mechons.

When visions allow Shulk to predict an enemy art, you can use Monado Arts to break the tags. Use auto-attacks to fill the talent gauge about halfway, then use Battle Soul to charge the talent arts meter, and use the appropriate Monado art. The HP taken from Battle Soul can be quickly recovered through Light Heal, so using these two arts in succession is another good combo. During chain attacks, Shulk can use Air Slash (or Stream Edge) to inflict break, then have Reyn/Dunban (etc.) inflict Topple with Wild Down/Steel Strike, which can be followed up with Shaker Edge to inflict Daze.

Shulks gem setup is rather versatile, so things like Haste, Double Attack, Recovery Up, Aggro Down, and HP Up are all useful for him. The default Skill Tree Intuition will raise Shulk's agility, and is generally a great option.

Shulk as an AI

As an AI as well, Shulk has a tendency to use Arts like Slit Edge, Back Slash, and Air Slash to target the sides/backs of enemies, so you need to make sure that another party member is the one absorbing aggro for him to be effective. During Mechon battles, Shulk will use Battle Soul and fill his talent gauge so that he can cast Monado Enchant and provide support to his allies.

Best and Worst Gifts For Shulk

In order for us to make the best articles possible, share your corrections, opinions, and thoughts about 「Shulk Build, Arts, Skill Trees, and Usage Guide | Xenoblade Chronicles Definitive Edition」 with us!