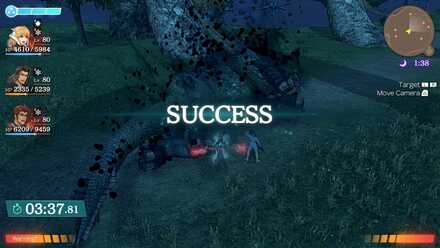 This is a guide to the Time Trial challenge Lost in a Dark Dream (Free Mode) in Xenoblade Chronicles: Definitive Edition (XC1) for the Nintendo Switch. Read on to learn how to beat Lost in a Dark Dream, strategies to use, and how to get an S Ranking.

You can achieve an S rank by completing the challenge before the 4:30 mark.

Fiora is the best party leader for this trial. Her Final Cross allows you to topple and severely damage the Mammut while also bringing down the surrounding enemies. The party gauge is also easy to increase due to the enemy's quantity. This allows Fiora to use Final Cross multiple times in succession.

These 2 have high survivability which is needed to endure the enemy assault during the first seconds of the fight. They also have strong single target arts which is extremely helpful in whittling down the Mammut's massive HP.

Critical Drain allows Fiora to go all out without relying on Healing Abilities. With Lock-On, Fiora can restore her HP from 0 to 50% with a single Final Cross.

Chain Attacks are easy to use due to the stragglers getting eliminated together with Fiora's critical strikes. Increasing your Chain Attack's damage further will make your clear time faster.

Muscle Up/ Agility Up

More Durability to survive the fight.

Rendering the Mammut helpless is necessary for this fight. Sumo Stomp deals high damage to the whole team and stopping it is the first step in ensuring your victory.

Not getting toppled in case the Mammut uses Sumo Stomp allows you to continue the fight and a chance in still earning that sweet S rank. Debuff Resist gem also renders all the annoying status ailments the other enemies can inflict useless.

Lost in a Dark Dream (Free Mode) Tips and Strategies

The first few seconds of the fight will decide the outcome of the fight. Increasing Fiora's tension and defeating several enemies in the middle of Chain Attacks are the key to victory. 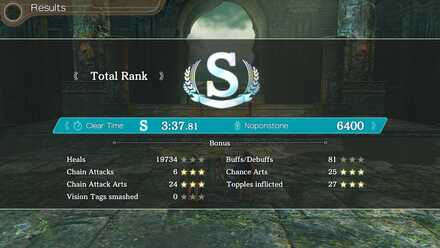 Topple Resist Gems are extremely handy in this fight. Debuff Resist gems will work wonders too. You will also want to use Topple Plus Gems to render the Mammut unable to move which can greatly reduce the damage your team takes.

The Mammut is extremely durable and strong. Various enemies will join the fight that can present their own trouble. Start the fight with Power Drain to reduce every enemy's damage. Immediately use Lock-On against the Mammut then apply Break to give way to your allies' topple skills. 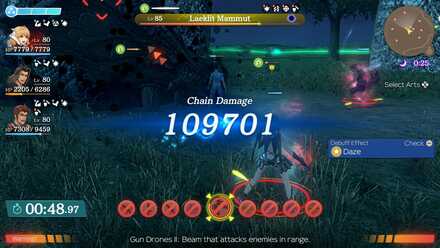 Chain Attack Completed and the Party Gauge is Full Again.

In order for us to make the best articles possible, share your corrections, opinions, and thoughts about 「Lost in a Dark Dream Time Attack S Rank Guide (Free Mode) | Xenoblade Chronicles Definitive Edition」 with us!