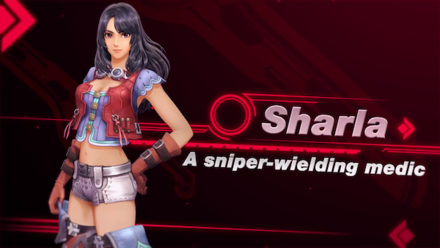 This is a profile and usage guide for Sharla, a character from Xenoblade Chronicles: Definitive Edition for the Nintendo Switch. Here you can find Sharla's roles, builds, stats at Lv. 99, best Arts, best skill trees, and official artwork.

A survivor of the Colony 6 Mechon invasion. Sharla is the older sister of Juju, who she is very protective of. Sharla is a medic, and in battle she is able to restore HP to party members and cure status ailments.

How to Play Sharla

Sharla is one of the harder characters to play as, due to her low offensive ability, and her Talent Art, which fills up as she uses Arts. Once the Talent Gauge fills up, she will be forced to use Cool Off, which will heal her, but prevent her from moving, attacking, or using arts. Cool Off can be used any time, and it will take more time when at 100%, so we recommend using it much sooner to reduce the amount of time Sharla is a sitting duck.

Heal Blast (or Heal Bullet) and Heal Round will be used to heal teammates, and Cure Bullet / Aura Bullet will be used for support. After leveling up the healing skills, be sure and spend some AP leveling up Drive Boost, since it reduces cooldown on all other arts. Due to her range, Sharla can attack from far away, even if Bind is inflicted on her. her main offensive Arts are Thunder Bullet, Head Shot, and Metal Blast. Be sure and level these up, particularly Thunder Bullet.

Recovery Up, Ether Up, and HP up are all good gems for boosting her support, and Electric Plus is essential for maximizing the effect of Thunder Bullet. Devotion or Affection are her best skill trees, and be sure to link skills that shorten cooldown. Link to Fiora's skill Explosion of Energy, which will increase tension each time the Talent Art is used.

Sharla as an AI

Sharla as an AI will focus on healing members and providing support, as well as keeping her aggro down. Make sure to have Heal Blast (or Heal Bullet) and Heal Round set, as well as Cure Bullet and Aura Bullet for support, initially prioritizing leveling up the healing skills. If set, Sharla will also use Tranquilizer to inflict sleep on enemies that aren't targeted, or ones that come after her.

In chain attacks, Head Shot Metal Blast will be the best damage options. If Shield Bullet is set, you can warn Sharla to use it on a party member targeted in a vision to reduce the damage.

Best and Worst Gifts For Sharla

In order for us to make the best articles possible, share your corrections, opinions, and thoughts about 「Sharla Build, Best Arts, Skill Trees, and Usage Guide | Xenoblade Chronicles Definitive Edition」 with us!