There are no side quests available from this chapter. 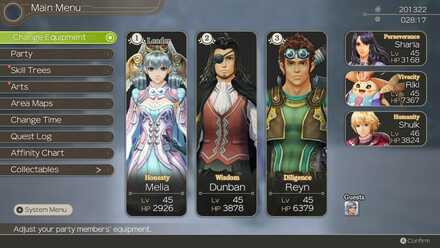 Shulk is definitely a good character to have in the party. But the game actually allows you to remove him in favor of creating a 3 man roster that suits your playstyle. Shulk is temporarily unavailable so creating a different party is a must for this chapter. Melia is highly suggested to be your party leader in this fight due to her mind blast ability, and great potential as a controlled character. Check our guide about recommended party members for more party setups.

A Telethia, Without Shulk, Melia is the only one that can counter a Telethia's Mind Read, so set her as your leader. Make sure to not waste Melia's Elemental Discharge until the Telethia uses Mind Read to complete the fight.

Shulk is temporarily unavailable in this fight. Soul Read is an aura that causes all attacks to miss, but Melia's Mind Blast can dispel this, allowing your team to fight.

In order for us to make the best articles possible, share your corrections, opinions, and thoughts about 「Chapter 16: Central Factory (Revisited) Walkthrough | Xenoblade Chronicles Definitive Edition」 with us!