A guide to Spike Damage in Xenoblade Chronicles Definitive Edition (XC1) for the Nintendo Switch. Read on to know learn what spike damage does, spike ability types, and how to counter enemies that deal spike damage.

What is Spike Damage? 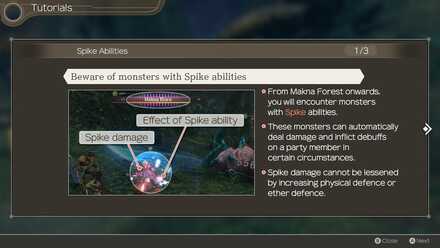 Spike Damage is fixed damage that will always deal its original value. This damage cannot be reduced by Defense or Ether Defense.

Enemies with Spike Damage essentially can deal damage to your characters when they are attacked, or just by being in close proximity.

Counter Spike is the most infamous spike ability among all three. Monsters with Counter Spike automatically deal spike damage or debuffs to the attackers when an auto-attack or Art hits them.

Down Spike is a spike ability that triggers when the enemy is toppled. Avoid toppling these foes, and just focus on debuffing them and defeating them through brute force.

Close Spike deals damage or debuffs to all party members that get too close to it. Avoid fighting these foes in melee range if possible, or remove it with Monado Purge.

How to Counter Enemies with Spike Abilities

Shulk learns the Monado Art: Purge at the time these enemies start appearing in the game. Monado Purge removes buffs and auras from enemies temporarily, and spike abilities are among those removed. Make sure to use Purge against these enemies the first chance you get!

Equipping Spike Defense Gems is the best way to reduce spike damage. It is impossible to use Purge against all spike enemies all the time, so make sure to equip these gems first before heading into the fray against enemies with spike abilities.

Foes with counter spike cannot deal spike damage while they are toppled. Topple them the first chance you get, and if possible, try to perpetuate the state of topple.

Avoid Toppling Foes With Down Spike

Conversely, make sure you do NOT topple foes with Down Spike. If you get a chain attack, you will want to simply go for damage via chaining similar colored Arts instead of trying to inflict Topple.

How to Know if Enemy Has Down Spike?

Impossible Aside From Toppling the Enemy

Toppling an enemy is the only real known method of checking if an enemy has a downspike ability. When an enemy shows a spike ability sign on their name, immediately cease all attacks by commanding your allies to come to you.

In order for us to make the best articles possible, share your corrections, opinions, and thoughts about 「What is Spike Damage? | Xenoblade Chronicles Definitive Edition」 with us!