This is a guide to beating Blizzard Belgazas, one of the super bosses in Xenoblade Chronicles: Definitive Edition (XC1). See which gems and skills you need to equip to beat Blizzard Belgazas, as well as items you can gain from doing so.

How to Beat Blizzard Belgazas

Good Footing is recommended to avoid the Blow Down Daze combo from Mountain Stomp and Rex Gore. Night Vision gems are necessary to even get a chance to defeating this guy normally. It gets an aura spike damage when toppled so a maxed out Spike Defence is recommended. Topple Plus is also recommended to prevent Belgazas from even standing up during the whole fight.

Skills that provides buffs when battling against higher leveled enemies are highly recommended against Super Bosses and Blizzard Belgazas is no exception.

Skills that boost your physical defence is highly recommended for the first few seconds of the fight. Surviving Belgazas' initial attacks gives you time to build up the party gauge and topple lock him in return. 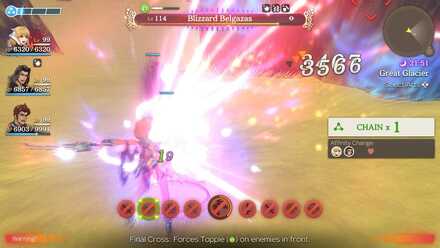 Proper strategizing already starts before initiating a fight with Belgazas. Make sure to check the weather first before fighting. Fighting Belgazas during a Blizzard will make some of his moves deadlier so it is suggested to not fight it until the weather is clear. Head upfront then fill up your party gauge to unleash a Chain Attack. Topple Belgazas then stay on Belgazas' sides (unless when you're using Double Blade for a back hit multiplier).

The gems equipped should not make Belgazas give you any trouble until you can topple lock him. Once he gets Topple Locked, never let go, especially when Belgazas is at low health. If it uses Craze, it will become immune to Topple which can make the battle harder than necessary.

All Super Bosses drop the Veritas Glyph. This is the only item that can be traded for a Love Source.

If you don't have it yet, Belgazas drops Topple Plus rank V crystals which can be crafted to rank VI Topple gems if heated.

Divine Protect gems can greatly help you against the highest leveled super boss in the game (debuff resist gems can too).

In order for us to make the best articles possible, share your corrections, opinions, and thoughts about 「How to Beat Blizzard Belgazas | Super Boss Guide | Xenoblade Chronicles Definitive Edition」 with us!