How to Open Gate to Hode's Lair

Complete the Heropon's Spirit Side Quest

You need the item “Kilaki's Note” to open the gate of Hode's Lair. This might be simple to do but there are some necessary things you must do in order to be able to accept this quest.

How to Get Heropon's Spirit Quest?

You need to have some affinity with Frontier Village before the following quests can be given to you. Reaching a 2 star affinity rank is a safe bet to start this chain of quests.

You must talk to Kilaki before you can recieve the quests from Leku. Kilaki can be found infront of Riki's house during 6:00 to 15:00. 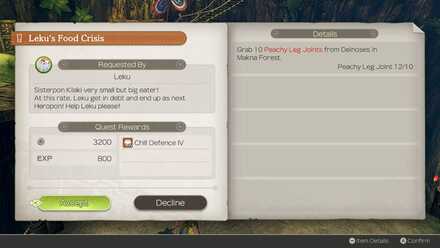 You will recieve 2 prior quests before you can initiate the Heropon's Spirit Quest. These are the “Leku's Food Crisis” quest and “Hunt for a Patron” quest.

>>1 Yes it does. It’s the very first thing shown. “Complete the quest Heropon’s Spirit”. The reward from that quest which is Kilaki’s Note is what’s needed to unlock the gate to the Hode Lair

>>1 Maybe, you haven't completed the quest yet and simply accepted it?

Register as a member and get all the information you want. (It's free!)
Login
Opinions about an article or post go here.
Opinions about an article or post
We at Game8 thank you for your support.
In order for us to make the best articles possible, share your corrections, opinions, and thoughts about "How to Enter Hode's Lair" with us!
When reporting a problem, please be as specific as possible in providing details such as what conditions the problem occurred under and what kind of effects it had.