Phlegmatic Jamir is near a group of Little Bunnits and a Wood Bunnit that can aggro on you.

Grotesque Deimis is surrounded by Daksha Pods and a Red Antol who can aggro depending on your level.

Booming Frederick only spawns while it's raining.

Bouyant Rostein is joined by a group of Perna Eluca who will join the fight. Depending on your level and point in the game, a Fogbeast is also nearby and can be aggro'd as well.

Air Marshal Reisenbach can be difficult to aggro due to its height above the ground. Standing in the area shown on the map is the best spot to get its attention.

Quondam Grimbellum spawns next to a group of Bunnit who will aggro when you engage with it.

Watchout for the Fogbeast Ciconia Ekidno near Confluent Uzva that will both cause it to Riot and lure in further away enemies into the battle.

There are two Leg Tokilos near Cyclonic Yughana as well as a cliff, so watch your positioning or you might get pushed off the edge.

Custodian Barreldart is both a Fogbeast and surrounded by three Satorl Torta and two Klanis Apis so try and remove their Riot Auras and take them out first if you're struggling with this one.

Deputy Seagal is joined by a Leg Volff.

Depending on where you engage with Caustic Naquatra, you might aggro other sound based Arcachnos.

Dismal Umya is in the middle of a bunch of Arachnos so watch your step.

Watch your attacks as Terpsichorean Cenoth spawns in the middle of a large group of Flamii.

Citadel Tostega spawns right in front of the Prayer Rock landmark, so if you're unprepared you may accidentally aggro it.

Perceptive Quinops is also guarding one of the Sparkle Stones required for the Brace for Friendship side quest.

Marquis Odesh is surrounded by a group of enemies that can be lured away and dealt with separately or all at once.

Ravager Apelpisía is accompanied by a Goldi Kromar and an Ether Igna that can be lured away if necessary. Beware its Dancing Crazy III ability that can topple anyone in range followed by an instant death attack.

What Are Unique Monsters?

Unique Monsters are powerful enemies that roam the map designated by their special title and ability to aggro onto you regardless of level. Successfully defeating one will get you rare materials and weapons as well as an Arts Coin.

What Are Arts Coins? 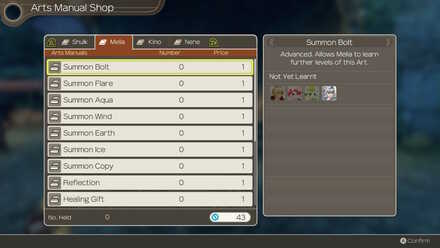 Arts Coins are a special currency obtained the first time you successfully defeat a Unique Monster (or a Fogbeast) and then at random any other time. These can be used to purchase Advanced Arts Manuals from a shop that opens up in Companion's Cape (and later moves to Gran Dell). 56 Arts Coins are required to purchase every Arts Manual in the epilogue.

Post (0 Comments)
Opinions about an article or post go here.
Opinions about an article or post
We at Game8 thank you for your support.
In order for us to make the best articles possible, share your corrections, opinions, and thoughts about "List of Future Connected Unique Monsters" with us!
When reporting a problem, please be as specific as possible in providing details such as what conditions the problem occurred under and what kind of effects it had.