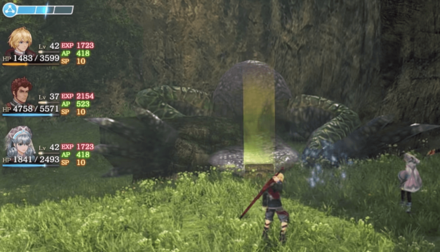 This is a guide to level grinding in Xenoblade Chronicles: Definitive Edition (XC1) for the Nintendo Switch. Here you can find out the different methods of farming EXP, and figure out how to level up your characters quickly.

How to Gain EXP

In order to level up, your characters will need to gain EXP. There are four methods of which EXP is obtained.

Like most RPGs, EXP can be gained through defeating enemies. While enemies two levels higher or lower than your characters will grant you a normal amount of EXP, higher level monsters provide more EXP, providing an incentive to take on the challenge. Conversely, lower leveled monsters provide Shulk and company with less EXP. While you will battle a lot along your adventure, EXP grinding through battles alone is not the most efficient method.

One of the easiest ways to gain Exp is through simply arriving at new landmarks and locations. By opening up your map and checking out which sections of your current area haven't been explored yet, you can easily travel there for free Exp. Finding a landmark will also allow you to fast travel to even more areas, in case you need to go back quickly later.

Each landmark/location offers a set amount of EXP/AP/SP, which will be higher for areas later in the game. There is also a special type of Landmark, called a Secret Area. Not surprisingly, they can be a bit harder to find, but they offer more EXP than normal landmarks and locations. When you get to a new area, simply travelling all over the map to get all Locations and Landmarks should be the first thing you do to collect EXP.

When you spot an NPC with a '!' marker over their head, it means that they have a side quest for you to complete. Some NPCs even give multiple side quests, and you can talk to them repeatedly until the '!' disappears to accept multiple quests at a time. Most side quests offer you either EXP or money 9 (or both) for completing them, as well as various items and equipment.

Since there is no limit to the amount that you can take on at a time, you should accept every side quest you come across. Side Quests often involve defeating a certain number of monsters or collecting a certain number of items, and once you complete the objective, the quest will usually end without even having to go back to the requester. This means that you can accept a lot of side quests, then complete them as you play normally for easy EXP.

Xenoblade Chronicles has a list of Achievements, which are divided into Trials and Records. Completing each of these rewards you with a set amount of EXP. A lot of them will be cleared naturally as you played the game, so you don't need to really need to go out of your way for them, but especially in the early game, they are a great source of easy EXP.

The following methods can be used to boost the amount of EXP characters obtain through battling and exploring. These are great ways to earn even more EXP when you are grinding through battles, etc.

EXP Up is a type of Gem that, when equipped to a character, will increase the amount of EXP that they gain from battling enemies. It is rather rare, but they can be obtained through the side quest The Road Home, Colony 6 Reconstruction, or through the Collectopaedia (Other). They are also sometimes found attached to armour and weapons.

Riki has a couple of unique skills that will allow him to gain extra EXP. These include Adore Sun!, Explore Time!, Riki See, Riki Do, EXP for All!, and Bestest Stars!.

Once Riki has learned these skills, other characters with a high enough affinity will be able to link to some of these skills to enjoy their benefits as well. Linking Riki See, Riki Do is great for characters you aren't using in battle, and Explore Time! is a must for boosting the EXP earned from each Landmark. Adore Sun! and Bestest Stars! are similar, except that Sun lets you gain more EXP during the day, while Stars is at night (Bestest Stars! also awards slightly more EXP).

Chain attacks can deal massive damage to enemies in battle, and if you manage to defeat an enemy with a Chain Attack, you will gain bonus EXP, along with AP and SP. Save up your party gauge and wait to unleash it when it looks like the enemy could be taken out by it.

As mentioned earlier, more EXP can be gained from battling higher level monsters. This will be difficult, as they will be able to block and dodge many more of your attacks, but beating them, especially with the EXP Up Gems and Riki Skill Links, will make it worthwhile.

Additionally, unique monsters provide more EXP than a normal type enemy would. These will also be very tough to take down, especially if underleveled, but hunting out and defeating Unique Monsters is one of the best ways to level grind.

At the near end of the game, there will be a sudden spike of difficulty which might make you need to grind your party's levels. Check our guide about end-game leveling areas for an easier and faster leveling!
Best Leveling Areas Post 70

There is an exploit that can be done after beating the boss of Tephra Cave. Doing so can allow you to level into the 50's in a matter of minutes. While you may not want to use this type of game breaking method, this method will allow you to practically skip all early game level grinding all together. For more information, see the page below.

In addition to the point above, it is worth mentioning that the amount that EXP increases is dependent on your lowest leveled member. This means that you can use Expert Mode to lower a character's level before fighting a monster, which will grant extra EXP/AP/SP when you beat it.

If your team is at a high level compared to the monsters in the area, they won't receive very much EXP/AP/SP, but lowering your character levels will allow you do receive a lot more. This may feel a bit exploitive of the game, but it is an effective way to shorten the time you spend grinding.

While more hardcore gamers may scoff at the idea, Casual Mode makes battling challenging monsters that provide a lot of EXP much easier. Casual mode can be toggled on and off at any time, so if you are just trying to level grind as quickly as possible, there is no shame in temporarily lowering the difficulty to farm exp much more easily.

To beat the main story, you will want to reach at least level 75 or higher before heading in to the final boss. Characters in Xenoblade Chronicles can level up to Level 99, at which point EXP gained no longer matters.

The following list shows all character stats at Level 99.

Post (0 Comments)
Opinions about an article or post go here.
Opinions about an article or post
We at Game8 thank you for your support.
In order for us to make the best articles possible, share your corrections, opinions, and thoughts about "How to Level Up Fast | Leveling Guide" with us!
When reporting a problem, please be as specific as possible in providing details such as what conditions the problem occurred under and what kind of effects it had.