This is a list of all gems in Xenoblade Chronicles: Definitive Edition (XC1) for the Nintendo Switch. Here we will explain what gems are and how to obtain them, and list all of the different types of gems.

These gems will add a bonus effect on to a character's auto attacks or arts. These are best used to boost the effects of arts set to a party member, such as equipping Blaze Plus to Melia to increase the power of her Summon Flare.

These gems will boost one of your character's stats, similar to equipping better armour.

These gems will reduce the effects of enemy status effects like poison, paralyze, etc. They are best used with certain enemies in mind (enemies that tend to topple can be fought with topple resist gems).

These gems work outside of battle. They are good for roaming around quickly and undetected, but best swapped out for other gems before a tough battle.

The gems increase the amount of AP or EXP that you can receive in battle.

Equip to armour or weapons to increase a character's abilities

Gems are a type of equipment that can be attached to armour or weapons with open slots on them (equipment marked with a blue S). When equipped, these gems can have various effects for your characters, ranging from stat boosts and additional attack effects to increased movement speed in the field!

Equipment with a pink U marked on them already have gems equipped which cannot be removed. This means that you cannot choose the gems slotted to these items.

Fall into one of six categories

Gems fall into one of six categories: Attack, Attribute, Defence, Field, Special, and Support. Each of these different categories provides a different type of buff for the character that they are equipped to.

How to Get Gems

Through Gem Crafting with Crystals 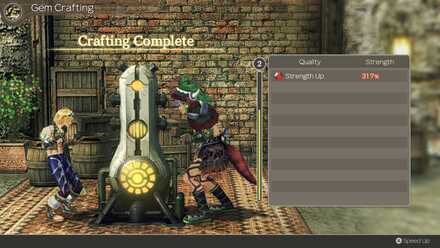 Crystals can be obtained through harvesting from ether ores, and by defeating certain enemies. Each crystal will contain certain qualities, which can be used to craft gems. If there is a specific gem you have your eye on, this is usually the best way to get it!

For more information on gem crafting and crystals, see the guide below.

Many side quests will offer gems as a reward for completion. These rewards will get better as the game progresses, allowing your party to continously obtain more powerful equipment.

For a list of Side Quests and rewards, see the page below.

Trading with NPCs is another method to obtain gems. To do so, find a named NPC, and select the button that says 'Trade' to see what they have to offer.

Some areas will offer gems as rewards for completing collectopaedia sections. Like side quests, these can only be collected once, but you should always try and pick them up in new areas.

In order for us to make the best articles possible, share your corrections, opinions, and thoughts about 「List of Gems | Xenoblade Chronicles Definitive Edition」 with us!