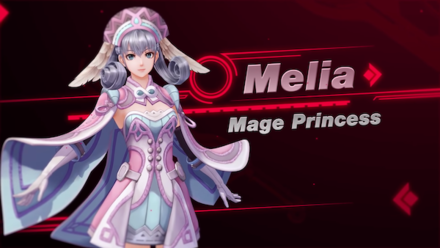 This is a profile and usage guide for Melia, a character from Xenoblade Chronicles: Definitive Edition for the Nintendo Switch. Here you can find Melia's roles, builds, stats at Lv. 99, best Arts, best skill trees, and official artwork.

Melia is the princess of the High Entia. She is very prideful at first, but soon warms up to the party and becomes a close ally and friend to Shulk's crew. Melia is is a typical mage archetype, so she has high ether attack and defense at the cost of low HP and physical defense. She can use various ether arts to inflict damage on her foes.

Melia Build and How to Use

How to Play Melia

Melia is a glass cannon mage archetype, sacrificing HP/Agility for a high ether stat. This means that Melia is very fragile and must hide behind her allies to avoid drawing aggro and getting one-shotted. Melia's main form of attacking is through using Summon Elemental arts to cast a party buff, then using the Talent Gauge to fire them off. If the talent gauge gets high enough, she will use Element Burst, doubling the effects of her elementals. The higher her tension, the higher this state will continue.

Summon Flare and Summon Bolt are her best offensive options, so be sure to level these up right away. You can summon up to three elementals, then discharge them opposite of the order they were summoned. It is important not to spam them too quickly, or Melia may draw the enemy's aggro.

Other than the two physical Arts (Spear Break and Starlight Kick), which are generally not very useful for Melia, most of her other Arts can be useful in cerain situations. We recommend Mind Blast, which removes enemy auras and seals arts, Summon Aqua and Healing Gift, allowing her to heal herself and her allies, plus two of the following: Burst End, Summon Ice, Summon Earth, Power Effect, or Reflection.

Her best skill tree is Passion, because it boosts Ether, but Honesty (Critical Rate) can be used if you have not unlocked Passion. Gems should enhance her arts, so Blaze Plus, Chill Plus, Electric Plus, Recovery Up, and Ether Up are all solid choices. HP Up will also help boost her low defensive stats.

Melia as an AI

Best and Worst Gifts For Melia

In order for us to make the best articles possible, share your corrections, opinions, and thoughts about 「Melia Build, Best Arts, Skill Trees, and Usage Guide | Xenoblade Chronicles Definitive Edition」 with us!