This is a walkthrough for the Bionis' Leg section of Xenoblade Chronicles Definitive Edition for Nintendo Switch. For a map of Bionis' Leg Landmarks and Locations, as well as boss strategy and other tips and tricks, read on!

Tap to Close or Expand

The Bionis' Leg is vast, and it holds many enemies that are a much higher level than your party. You don't need to fight them, and fighting them will most likely end with multiple demises, so just avoid them.

Upon fighting the boss of this level, you unlock the Monado Art called Monado Speed, which grants Shulk and his party evasion against physical attacks. Use it to increase survivability. When Shulk gets a vision of an enemy Physical Art (in Red Text), this is the go-to move for countering that Art, by applying it to whoever is being targeted. 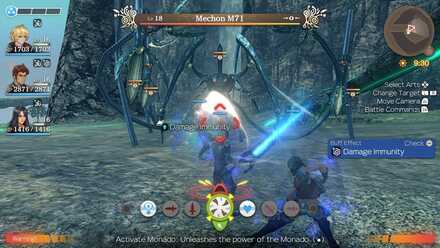 You'll fight the Mechon M71 twice, once under the rock formation and another time on it. Be prepared, as the phase change happens at about half health, and the switch from Phase 1 to 2 resets its health.

Kill the Tentacles in Phase 1

There are three tentacles considered as separate Level 15 enemies alongside the Mechon M71. Take them out first, as they do a lot of damage, but are very easy to kill. One Back Slash and a few hits are enough to get rid of them.

Use Positional Attacks In Phase 1

In Phase 1, the orientation of the Mechon and its tentacles do not shift, so if you're behind it, you'll remain behind it for the whole battle. This makes it easy to land hits like Back Slash.

Make sure you are leveled enough

This is one of the tougher bosses in the early game if you are under leveled. Ideally, you will be at the same level as Mechon M71, but at the very least, you should not be more than 2 levels less than it.

Post (0 Comments)
Opinions about an article or post go here.
Opinions about an article or post
We at Game8 thank you for your support.
In order for us to make the best articles possible, share your corrections, opinions, and thoughts about "Chapter 4: Bionis' Leg Walkthrough" with us!
When reporting a problem, please be as specific as possible in providing details such as what conditions the problem occurred under and what kind of effects it had.