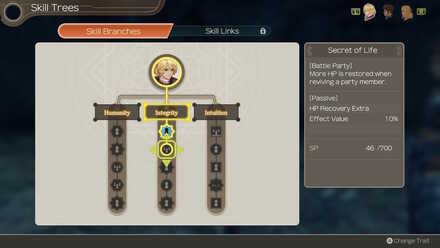 This is a guide to SP farming in Xenoblade Chronicles: Definitive Edition (XC1) for the Nintendo Switch. Here you can find out the different methods of gaining SP (Skill Points), and learn how to get easy SP for your characters.

Points for leveling up your skill trees

SP (Skill Points) is used to earn skills from a character's skill tree. Unlike AP, which is manually used to level up the desired art, SP will automatically be spent to learn whatever skills are in the active skill tree that is set for a character. 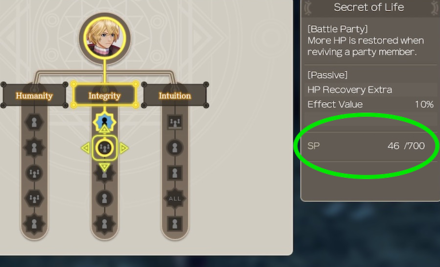 The current SP toward learning a skill can be seen to the right of a character's skill trees. Skills are learned in a predetermined order, so SP earned while a skill tree is active will be spent toward learning all skills in that tree. If there is a skill you want to have, make sure to set the right tree beforehand, and don't waste SP by forgetting to set a different tree after learning all skills from the active one!

How to Gain SP

There are two ways in which SP is obtained. They are the same as the methods for gaining AP.

Along with EXP/AP, SP can be gained through defeating enemies. While enemies two levels higher or lower than your characters will grant you a normal amount of SP, higher level monsters provide more SP, providing an incentive to take on the challenge. Conversely, lower leveled monsters provide Shulk and company with less SP.

One of the easiest ways to gain SP is through simply arriving at new landmarks and locations. By opening up your map and checking out which sections of your current area haven't been explored yet, you can easily travel there for free SP. Finding a landmark will also allow you to fast travel to even more areas, in case you need to go back quickly later.

Each landmark/location offers a set amount of EXP/AP/SP, which will be higher for areas later in the game. There is also a special type of Landmark, called a Secret Area. Not surprisingly, they can be a bit harder to find, but they offer more SP than normal landmarks and locations. When you get to a new area, simply travelling all over the map to get all Locations and Landmarks should be the first thing you do to collect SP.

Out of EXP, AP, and SP, SP is by far the toughest to grind, since there are less methods of doing so. However, the following methods can be used to boost the amount of SP characters obtain through battling and exploring, decreasing the amount of time you have to spend grinding.

Chain attacks can deal massive damage to enemies in battle, and if you manage to defeat an enemy with a Chain Attack, you will gain bonus SP, along with EXP and AP. Save up your party gauge and wait to unleash it when it looks like the enemy could be taken out by it.

As mentioned earlier, more SP can be gained from battling higher level monsters. This will be difficult, as they will be able to block and dodge many more of your attacks, but beating them will award a lot more SP than you can obtain from lower leveled enemies.

Additionally, unique monsters provide more SP than a normal type enemy would. These will also be very tough to take down, especially if underleveled, but hunting out and defeating Unique Monsters is one of the best ways to farm easy SP.

There is an exploit that can be done after beating the boss of Tephra Cave. Doing so can allow you to level into the 50's in a matter of minutes. While you may not want to use this type of game breaking method, this method will allow you to earn a ton of SP in addition to EXP and AP. For more information, see the page below.

In addition to the point above, it is worth mentioning that the amount that SP increases is dependent on your lowest leveled member. This means that you can use Expert Mode to lower a character's level before fighting a monster, which will grant extra EXP/AP/SP when you beat it.

If your team is at a high level compared to the monsters in the area, they won't receive very much SP, but lowering your character levels will allow you do receive a lot more. This may feel a bit exploitive of the game, but it is an effective way to shorten the time you spend grinding.

While more hardcore gamers may scoff at the idea, Casual Mode makes battling challenging monsters that provide a lot of SP much easier. Casual mode can be toggled on and off at any time, so if you are just trying to farm SP as quickly as possible, there is no shame in temporarily lowering the difficulty to do so much more easily.

In order for us to make the best articles possible, share your corrections, opinions, and thoughts about 「SP Farming Guide | How to Grind SP | Xenoblade Chronicles Definitive Edition」 with us!