This is a walkthrough for the Tephra Cave (Revisited) section of Xenoblade Chronicles Definitive Edition for Nintendo Switch. For a map of Tephra Cave Landmarks and Locations, as well as boss strategy and other tips and tricks, read on!

Note: Some landmarks and locations can only be reached after completing Chapter 15: Mechonis Core.

Note: Landmarks F and G can only be reached after completing Chapter 15: Mechonis Core.

Use Future Vision To Save Your Characters From Strong Attacks

Once you begin battling the Queen Arachno, you'll gain the ability to glimpse into the future to see what attacks enemies might do. Use this knowledge to cast protective arts on your characters beforehand. If the enemy art is a Talent Art (shown in White Text), the damage can be blocked by casting Monado Shield.

Additionally, Shulk can warn his allies of what is going to happen, and you can choose to have them perform an art at the cost of one bar of the Party Gauge. If they have their own defense skill, keep a bar handy to make sure they aren't helpless when Shulk's Talent Gauge is not full. For Reyn, Last Stand will prevent him from dying.

Use Area of Effect Arts Against Crowds 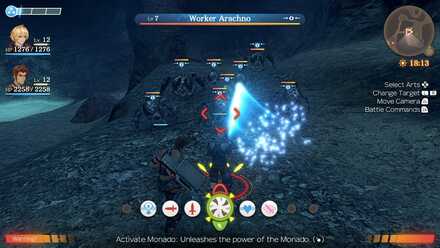 When ambushed by Arachnos and fighting the Queen Arachno, there will be a swarm of enemies surrounding you, and using area of effect attacks arts like Stream Edge and War Swing are good ways to soften all of them up at once.

There is an exploit that can be done after beating the boss of this area. Doing so can allow you to level into the 50's in a matter of minutes. If you are interested in learning about this glitch to level up your team super fast, see the guide below! 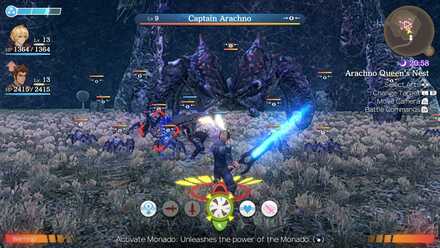 Use the Tips Above

This battle is a good chance to put in practice the tips above!

Get Rid of the Smaller Spiders

While you may not notice it they deal quite a lot of damage when stacked up. Take care of them before focusing fire on the queen.

The Queen Arachno has an ability that keeps you in place, and allows her swarm to overwhelm you. Keep mobile so the crowd does not get you!

In order for us to make the best articles possible, share your corrections, opinions, and thoughts about 「Chapter 3: Tephra Cave (Revisited) Walkthrough | Xenoblade Chronicles Definitive Edition」 with us!