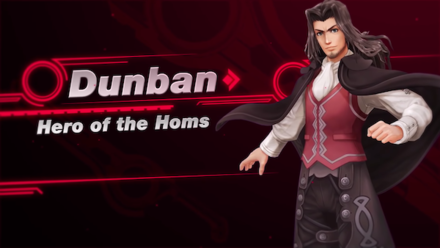 This is a profile and usage guide for Dunban, a character from Xenoblade Chronicles: Definitive Edition for the Nintendo Switch. Here you can find Dunban's roles, builds, stats at Lv. 99, best Arts, best skill trees, and official artwork.

Dunban is brave and heroic, as well as responsible and mature. A year prior to the game's beginning, Dunban fought in a war against the Mechon, weilding the Monado to drive them off. However, this took a serious toll on him, leaving his right arm paralyzed. After Shulk inherits the Monado, Dunban begins to fight using regular swords.

Though his HP is much lower than Reyn's, Dunban can absorb enemy aggro and tank attacks thanks to his very high agility stat. Several Arts can be used after Gale Slash for additional effects, so this is an essential art for Dunban, and should be one of the first that you level up.

After Gale Slash, use Worldly Slash to lower the enemy's defense and strength, or Electric Gutbuster to inflict break, which can be followed up with Steel Strike to topple the foe. Peerless and Spirit Breath are both excellent auras, which raise Dunban's strength and remove debuffs/give him haste respectively. All of these are excellent arts that you should level up accordingly.

Blossom Dance, his Talent Art, requires you to time your B presses for full effect. For the most damage, save this Art for a Chain Attack, and unleash it after the damage multiplier has grown large enough.

When Reyn isn't in the party, Dunban does a great job of absorbing the enemy's aggro. He will use Gale Slash to combo with his other arts like Electric Gutbuster, Worldly Slash, etc. Gale Slash > Electric Gutbuster > Steel Strike allows him to topple foes, so make sure these are all set.

In chain attacks, he can be used to topple a foe with break inflicted, or deal massive damage through his physical arts and talent art.

Best and Worst Gifts For Dunban

Post (0 Comments)
Opinions about an article or post go here.
Opinions about an article or post
We at Game8 thank you for your support.
In order for us to make the best articles possible, share your corrections, opinions, and thoughts about "Dunban Build, Best Arts, Skill Trees, and Usage Guide" with us!
When reporting a problem, please be as specific as possible in providing details such as what conditions the problem occurred under and what kind of effects it had.