The Quest Guide works as a nearest path guide to your current destination. The quest guide however, ignores all enemies in the path. It is sometimes, better to steer your direction and look for an alternative route to arrive at your destination safer/faster. 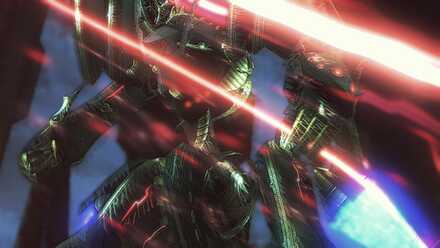 Gadolt fights you with several laser-based moves. These attacks are ether attacks, so build up your HP and Ether Defense to survive Gadolt's onslaught. Bringing him down to 25% HP will end the 1st fight. He isn't that difficult during the first fight, but things will greatly change during the 2nd one.

Gadolt is immune to break, but Riki's Roly-Poly can force topple on him. Toppling him can greatly change the tide of the fight to your favor. Unleash Dunban and Shulk's arts when Gadolt is toppled (should you get the chance). Successfully doing so will end the fight rather quickly. 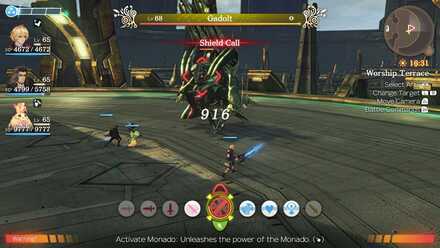 This time, Gadolt fights for real. He has several ether-based attacks, so Evasion and Defense stats play a minimal role in this fight. He summons two Mechon allies and uses the same moves he had during the first fight. Don't let this fool you, as a DPS-type boss with other units taking aggro for him is much more challenging.

How to Survive Gadolt's Laser Bullet

Make sure to save up your Party Gauge! A quick fact about Chain Attacks: Chain Attacks cannot be canceled by any other means once in use. Timing a good Chain Attack against Gadolt's Laser Bullet will still cause your party to take damage, but your character's health will never fall below 1. 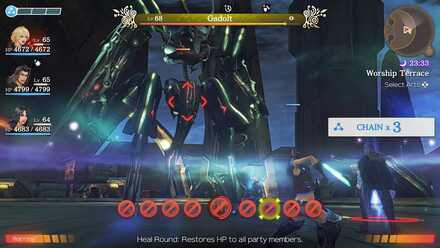 Time your Chain Attack at the same time Gadolt uses Laser Bullet, and most of your character's HP will fall in the red zone. Then chain some healing arts to recover from the move. This will allow you to continue the fight and you will only lose a whole party gauge.

Evasion isn't a good stat for this battle, but Dunban is still a better choice than Reyn in this fight. Dunban can dish out more damage than Reyn, which is great as prolonging the duration of this battle will prove hard. As listed above, Sharla's value in this fight is immeasurable. It's the doctor that you'll have to call when you're hurt, and Gadolt can hurt you a lot. 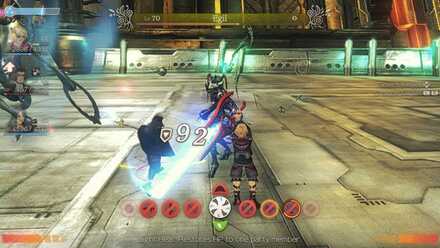 Similar to Gadolt, Egil will summon mechon allies to his side to fight for him. These Mechons aren't durable, but the flying mechon can use Sacrifice if damaged then left alone. A group of flying mechon using Sacrifice at the same time will prove fatal to your team.

Watch out for Egil's Homing Missile. It is capable of wiping out your whole party in a single-use, but it can be blocked by Shield. Just keep your Monado Arts ready and Egil will fall easily.

Yaldabaoth is a high-level enemy. It cannot be defeated. Just endure and survive the fight. Yaldabaoth will use Catastrophe soon, then the fight will end.

A sustain setup is recommended for this fight to survive Yaldabaoth's assault. You can also attempt to level Shulk up so you can hit Yaldabaoth and build up your talent arts. If you can always keep Monado Shield up, his Alchemy talent art will prove useless (which is also his only high damaging move).

In order for us to make the best articles possible, share your corrections, opinions, and thoughts about 「Chapter 14: Central Factory and Agniratha Walkthrough | Xenoblade Chronicles Definitive Edition」 with us!