There are no side quests in this area.

No Collectables at this time!

Prison Island has no obtainable collectables until you revisit in Chapter 17. 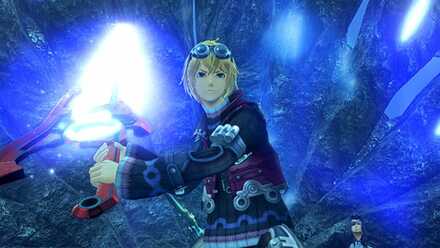 After unlocking the power of the Monado, Shulk can now deal damage to Mechons with faces! There is no longer a need to topple Faced Mechons to do damage. This will also allow you to further level up your Monado arts to 10!

Remember that the Shield art is capable of blocking Enemy Talent Arts. To easily know if the ability can be blocked, check if their ability name has a roman numeral. This indicates the rank and your shield art's level must be equal or greater to block the art.

Not all enemy arts can be shielded, so using Speed to dodge these assaults is often necessary. Do not panic, and make sure to assess which of the two defensive arts you need to use to surpass the obstacles you face.

A summary note on when to use Shield and Speed: 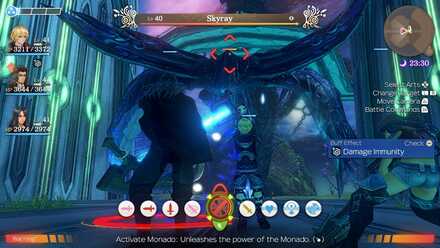 Skyray seems easy at first glance, until it surprises you with Ether Meteor II, which greatly damages everyone and dazes them. Aside from Ether Meteor, none of Skyray's arsenal will prove fatal to a well-prepared party. Always have the Monado Shield buff for your party, and keep the assault on it and Skyray will fall shortly.

Make sure that Shield is at least rank 2 before fighting Skyray as a rank 1 Shield will not be able to block Ether Meteor II.

This is a party that doesn't consist of any aggro taking character such as Dunban or Reyn. Shulk, however, has the support from Sharla's healing and Melia's buffs, which will greatly increase Shulk's battle potential. Keep Shulk offensive to steer away Skyray's aggro from your two support characters.

Melia and Sharla are also chosen since Ether Meteor's range hits all characters near it, so Sharla and Melia's range should keep them safe from harm. It is also safe to substitute Riki for Sharla since Riki's HP pool is massive enough for him to survive Ether Meteor.

A tankier setup. This allows your party to go full on aggressive in Skyray's face and ignore all of its assault. A durable party setup that makes use of everyone's damage to not extend the duration of the fight. 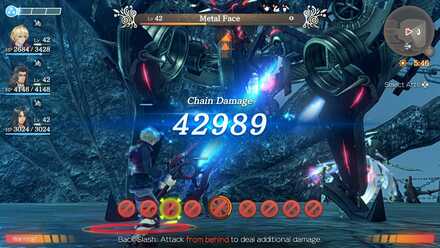 This fight is pretty much a demo for the new powers you unlocked. His durability isn't that high, and the fight will end when Metal Face's HP falls to 30%. Make sure to use Monado Enchant, and a good Chain Attack should be able to end the fight quickly.

A high damaging party is recommended for this fight. Utilize Metal Face's low durability with high damaging combos and arts. Linking a good X3 or X4 chain multiplier with physical arts should be enough to defeat Metal Face in a few seconds.

Post (0 Comments)
Opinions about an article or post go here.
Opinions about an article or post
We at Game8 thank you for your support.
In order for us to make the best articles possible, share your corrections, opinions, and thoughts about "Chapter 9: Prison Island (1st Time) Walkthrough" with us!
When reporting a problem, please be as specific as possible in providing details such as what conditions the problem occurred under and what kind of effects it had.