Presents Guide | How to Give Gifts | Xenoblade Chronicles Definitive Edition 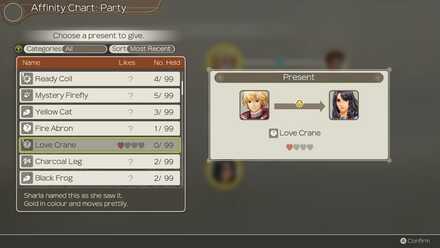 This is a guide to gifting in Xenoblade Chronicles: Definitive Edition (XC1) for the Nintendo Switch. This guide will cover how to give gifts, as gift affinity gained from each character.

The following charts list the affinity gained or lost when each collectable is presented to a specific character, divided by collectable type (the character names are abbreviated). Each chart can be closed or displayed by clicking the button above them.

Give them through the Affinity Chart 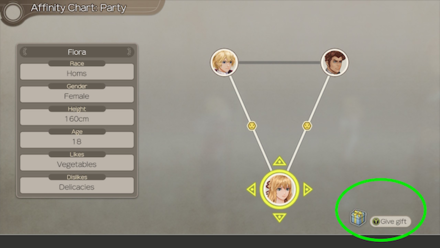 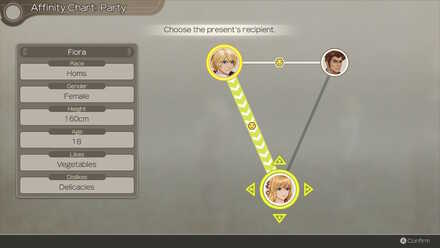 After selecting who will give/receive the gift, you are given a list of collectables to choose from. If the receiver likes the gift (shown by a heart/hearts), the affinity level between the giver and receiver will rise. However, if the receiver dislikes the gift (shown by a black heart/hearts), the affinity level between them will be lowered. In Xenoblade Chronicles: Definitive Edition, giving a gift to another character once will record how many hearts it causes the recipient to gain/lose, so you can keep it in mind next time.

When gifting, the more hearts, the better, so you should mainly give collectables to whatever character will gain the most affinity for it. To learn which gifts result in the most hearts for each character, see the guide below. 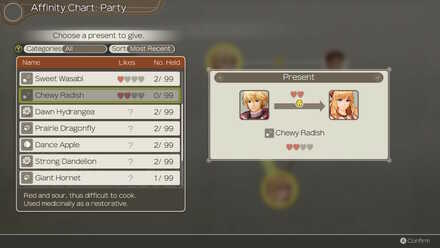 Gifting is a mechanic in Xenoblade Chronicles where you can present party characters with Collectables (the shiny blue items picked from the overworld) in your inventory as a means of raising affinity. Since you will pick up a ton of these items throughout your quest, and a higher affinity with party members leads to many benefits, presenting collectables to other party members is these best use of these items (granted they are not needed for a quest.)

There are eight types of collectables that can be collected: vegetable, fruit, flower, animal, bug, nature, parts, and strange. While each character tends to like or dislike a certain type of collectable in general, each collectable adds or subtracts a certain amount of affinity between the character giving / receiving the gift.

For example: Shulk dislikes most Vegetables, although gifting him an Energy Aubergine will award 10 affinity points.

Post (0 Comments)
Opinions about an article or post go here.
Opinions about an article or post
We at Game8 thank you for your support.
In order for us to make the best articles possible, share your corrections, opinions, and thoughts about "Presents Guide | How to Give Gifts" with us!
When reporting a problem, please be as specific as possible in providing details such as what conditions the problem occurred under and what kind of effects it had.