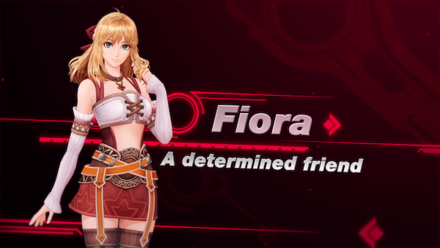 This is a profile and usage guide for Fiora, a character from Xenoblade Chronicles: Definitive Edition for the Nintendo Switch. Here you can find Fiora's roles, builds, stats at Lv. 99, best Arts, best skill trees, and official artwork.

Note that this page may contain Xenoblade Chronicles Spoilers! Please be advised when reading ahead.

A childhood friend of both Shulk and Reyn, who also grew up in Colony 9, and little sister to Dunban. A very caring soul, who goes out of her way to care for Shulk and ensure his safety.

How to Play Fiora

Fiora is unique in that depending on the foot gear she has equipped, her Talent Art will change. If possible, we recommend going with Sword Drones as her Talent. Fiora can fill various roles in combat, but when controlling her, you will generally want Reyn or Dunban to do the tanking so she can freely use her powerful position based Art - Double Blade. Another benefit of Fiora is the fact that she doesn't need Enchant to deal damage to Mechon, because of Mechonis armour.

In addition to Double Blade, Speed Shift is a great skill for Fiora, and it should be one of the first to prioritize leveling up, alongside Power Drain. Spear Blade is another powerful attack for damaging toppled foes, so it is especially good in a Chain Attack. Air Fang will inflict break, allowing an ally to topple the foe.

Make sure to equip Double Attack gems to Fiora, and focus on Critical Attack Rate / Haste. Innocence is the skill tree you'll want to focus on when using her together with Shulk.

Fiora as an AI

Fiora will prioritize using Speed Shift to increase Double Attacks/Haste, then refrain from using many Arts and focus on Auto-Attacks. When Sharla, Melia, or Shulk are targeted by the foe, she will use Lock-On to draw their aggro. Although Fiora is decent at tanking, Dunban or Reyn are generally better in this role, so we don't recommend setting Lock-On or Guard Shift.

When Fiora's HP gets low, she will use Healing Energy to remove debuffs and regenerate HP. Once the party gauge gets high enough, she will refrain from using Talent Arts, allowing you to unleash Sword Drones on the enemy after the chain multiplier has grown

Best and Worst Gifts For Fiora

In order for us to make the best articles possible, share your corrections, opinions, and thoughts about 「Fiora Build, Best Arts, Skill Trees, and Usage Guide | Xenoblade Chronicles Definitive Edition」 with us!