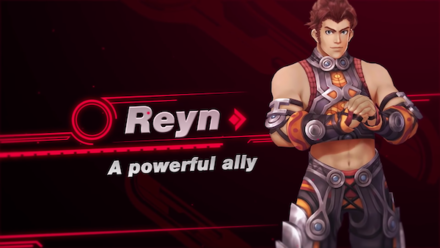 This is a profile and usage guide for Reyn, a character from Xenoblade Chronicles: Definitive Edition for the Nintendo Switch. Here you can find Reyn's roles, builds, stats at Lv. 99, best Arts, best skill trees, and official artwork.

One of Shulk and Fiora's best friends. Reyn is part of the Colony 9 Defense Force. While he is somewhat hot-headed and brash, he is also protective of his friends and has a strong heart. In combat, Reyn acts a a tank for the enemies' attacks, allowing the party to target the enemy with their Arts.

How to Play Reyn

Reyn is going to be the party tank for a large part of the game, or at least until Dunban joins your party. You'll want to make use of his Arts to keep the aggro drawn away from Shulk and your other allies.

A good combo going into battle is to use Magnum Charge, followed by Sword Drive for massive damage. Aim to level these up as quickly as possible. Other than this, you'll want to fill Reyn's Talent Gauge so that he can use Mad Taunt and draw enemy aggro. The talent gauge can be filled by auto-attacking, but also through use of Arts such as War Swing, Bone Upper, and Lariat.

Wild Down will allow Reyn to Topple foes inflicted with Break, so this is an essential Art to prioritize leveling up. Bone Upper can be followed up with Drive Sobat to lower an enemy's agility, so these two skills should also be set and leveled up.

Especially in the beginning of the game, tacking on several Agility Up gems and light armor to Reyn is an easy way to increase his survivability. After gaining access to heavy armor with higher defenses, you will generally want to prioritize Reyn's physical defense instead of using Light Armor. Max out Reyn's physical defense and HP through leveling and armor, then equip him with gems to boost his Strength and offensive power.

For Skill trees, Camaraderie (physical defence) or Diligence (agility) are both good options to prioritize.

Reyn as an AI

Reyn will make use of Engage, Hammer Beat, and other skills to draw out enemy aggro. Make sure that he has Wild Down, equipped, as he will generally use it on foes with Break inflicted on them to Topple them. If it is equipped, he will also use Shield Bash on toppled foes to inflict Daze. In chain attacks, you will want to make use of both of these skills to Topple/Daze foes, and then use Red Physical Arts to chain damage.

Make sure Bone Upper and Drive Sobat are equipped, as he will chain them together to lower enemy agility. When Reyn is targeted by enemy Arts, warn him to use Last Stand so that he can endure the attack.

Best and Worst Gifts For Reyn

In order for us to make the best articles possible, share your corrections, opinions, and thoughts about 「Reyn Build, Best Arts, Skill Trees, and Usage Guide | Xenoblade Chronicles Definitive Edition」 with us!