How to Get Affinity Coins | Xenoblade Chronicles Definitive Edition 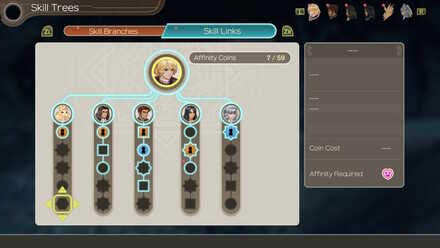 This is a guide to getting Affinity Coins, which are used for Skill Links in Xenoblade Chronicles: Definitive Edition (XC1). Read on to learn the easiest way to get more of them.

What Are Affinity Coins?

Once the character unlinks the skills, the Affinity Coins spent in linking them get returned to player, so none of them are permanently spent.

For an explanation on Skill Links, see the guide below.

How To Get Affinity Coins

There are two ways to get affinity coins, leveling up and defeating unique monsters.

For every time you level up, your character is granted Affinity Coins. This is shared amongst the party, so whether or not they're in your battle party, they will level up and get extra affinity coins.

There are unique monsters around the Bionis and Mechonis that can be defeated once, and upon defeating, them the player is awarded Affinity Coins for their party as well.

If you play new game plus, Affinity Coins and Levels carry over. Because of this, there is no way to get more affinity coinse through leveling once you hit level 99 in NG+, but you can repeatedly hunt Unique Monsters every NG+ and grind more Affinity Coins.

What Carries Over to New Game Plus?

Post (0 Comments)
Opinions about an article or post go here.
Opinions about an article or post
We at Game8 thank you for your support.
In order for us to make the best articles possible, share your corrections, opinions, and thoughts about "How to Get Affinity Coins" with us!
When reporting a problem, please be as specific as possible in providing details such as what conditions the problem occurred under and what kind of effects it had.