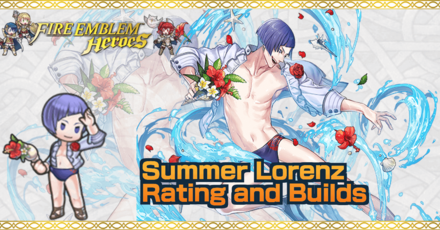 This is a ranking page for the hero Lorenz - Highborn Heat from the game Fire Emblem Heroes (FEH). Read on to learn the best IVs (Individual Values), best builds (Inherit Skill), weapon refinement, stats at Lv 40, and more for Summer Lorenz.

As a hero obtainable only through Tempest Trials, Summer Lorenz will always have neutral IVs by default. The only way to access IVs for this unit is through using Trait Fruits.

The best IVs for Summer Lorenz are +Atk and -Def. Lorenz does not rely on follow-up attacks to score more damage so a +Atk IV is best in increasing his overall damage output. His Def is of less importance so it can be safely taken as a bane.

We recommend a +Spd IV when merging Summer Lorenz to 10. At +10 Merges, Summer Lorenz' Atk will reach such high levels that pushing it up higher is a waste, considering he has access to Conch Boquet+ and Fire Boost 3, two kills that increse his Atk stat. At this point, it would be better to opt with a +Spd IV instead to help him take less follow-up attacks and allow him to make some follow-up attacks on his own. Follow-up attacks also speed up special activation so make sure to get an offensive special skill on Lorenz.

With it, he will reach 38 Spd at max merges so he still needs some to support to score consistent follow-up attacks. If you prefer a more defensive Lorenz, you can take advantage of his only superboon and go for a +Def IV.

Another way to run Summer Lorenz is through a high-budget Blade tome build. A budget option for the B slot would be Chill Res 3. For the C slot, you can take an Atk Wave skill for a budget option.

This is a simple budget build for Lorenz that allows him to take out a wide range of axe units. HP/Atk 2 is taken to improve his ability to proc Fire Boost 3.

Note: Summer Lorenz's stats will always have no IVs.

Summer Lorenz is a ranged magic attacker (range = 2). Therefore, when not accounting for the Weapon Triangle, the amount of damage he deals will be equivalent to his Atk minus the foe's Res stat.

Conch Bouquet+ grants Lorenz +5 Atk/Res and restores 7 HP to him after combat every first battle of a turn. It can only be activated once per turn, but it is pretty helpful nonetheless. If Lorenz needs a boost to take a priority unit down, he can bait enemies into attacking him while Conch Bouquet+ is still available in said turn.

Buffs Atk if HP is Higher than Foe's

Fire Boost 3 grants +6 Atk if Lorenz' HP ≥ foe’s HP+3. Unlike Death Blow 3, it also activates when Lorenz performs counterattacks, making it a goood enemy phase skill as well. This works well with Conch Boquet+ and Even Res Wave 3 as both those skills work in the enemy phase. It can be said that Summer Lorenz is a decent unit in the enemy phase when going against magic-based foes.

If you are planning to invest on Lorenz and heavily rely on this skill, it is pretty easy to increase his HP as copies of him will soon be available through Heroic Grails.

Can buff himself and nearby allies' Res

His default C skill Even Res Wave 3 grants Res +6 to unit and adjacent allies at the start of even-numbered turns. Wave skills provide buffs even to the user, despite being C-slot skills, which is a huge advantage to using them. Use the even-numbered turns buff to your advantage, and strike when the time is right!

Lorenz as a red tome user, has no glaring weakness when it comes to stats, but he also does not have stand out stats. Consider inheriting powerful offensive skills onto him if you plan to use him as an offensive magic unit

We Do Not Recommend Unlocking Potential for Lorenz - Highborn Heat!

Summer Lorenz as a Source Hero

Summer Lorenz can be used to inherit the skill Conch Bouquet+. However, you can only acquire Summer Lorenz from Tempest Trials or from using Heroic Grails, so think carefully before foddering him off.

How to Get Summer Lorenz / Illustrations / Voice Actor / Quotes

How to Get Summer Lorenz

Summer Lorenz is a limited time Hero who can be obtained as a reward for your score in the Tempest Trials. They do not appear in regular summons. After the event has ended, they can be obtained by using Heroic Grails.

Register as a member and get all the information you want. (It's free!)
Login
Opinions about an article or post go here.
Opinions about an article or post
We at Game8 thank you for your support.
In order for us to make the best articles possible, share your corrections, opinions, and thoughts about "Summer Lorenz Best Builds and Best IVs" with us!
When reporting a problem, please be as specific as possible in providing details such as what conditions the problem occurred under and what kind of effects it had.