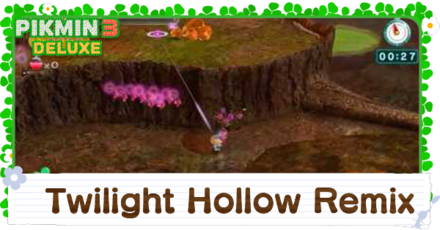 A guide to obtaining the platinum medal for the Collect Treasure! Mission: Twilight Hollow Remix in Pikmin 3 Deluxe for the Nintendo Switch. This guide will walk you through how to clear the mission and earn a platinum medal! 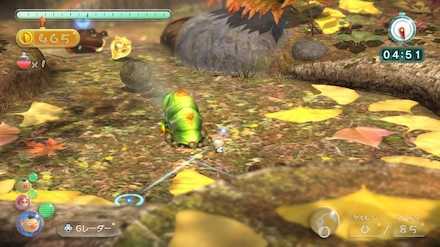 Explore the Map while Defeating Enemies 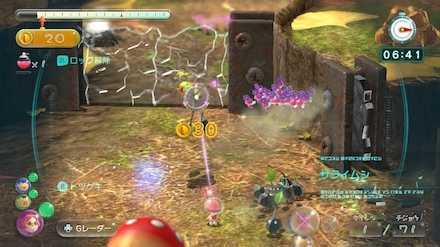 While defeating enemies is of course important in this mission, making sure to also explore the map as well is ideal. You can save time by attacking with Winged Pikmin and having the leftover Rock Pikmin destroy walls. 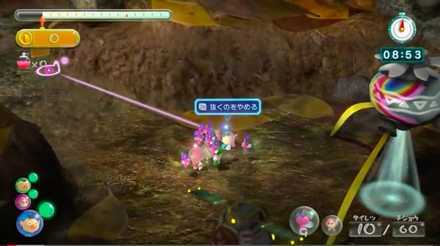 First, retrieve the Winged Pikmin. During this, throw Charlie and have him head to the center of the map where the Rock Pikmin are using the Go Here function. Have Alph and Brittany head towards the southern area and quickly begin plucking the Winged Pikmin. After that, defeat the Shearwig and retrieve its body.

Throw a few Pikmin at the rubble pieces and throw the remaining Pikmin and Brittany over to the other side. 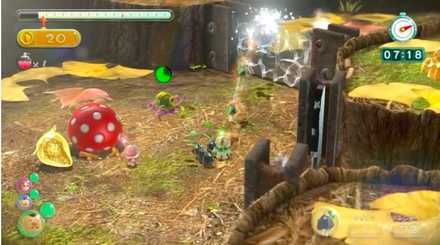 Have Brittany gather up the Winged Pikmin and charge attack the Bulborb from behind. Have Charlie destroy the glass wall in front of him with Rock Pikmin and then assist in taking down the Bulborb.

Once Charlie has assisted in taking down the Bulborb, also take care of the Swooping Snitchbug. After defeating all the enemies, they will drop a Sunseed Berry and Cupid's Grenade respectively. Retrieve the nearby fruits and enemy bodies and destroy the glass wall on the right-hand side. Pluck the Winged Pikmin located on the other side. 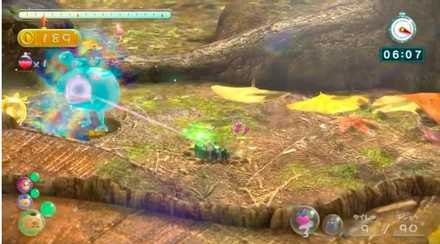 Have Charlie throw Brittany over to the ledge on the right. Pass by the Orange Bulborb and then use the Winged Pikmin to begin retrieving the Nuggets.

After retrieving the Nuggets, then let's retrieve the Nuggets located on the ledge.

After Brittany reaches the ledge, use the boulder spit up from the Armored Cannon Larva and defeat the Bulborb and Orange Bulborb. After that, descend from the ledge and head north after retrieving the Rock Pikmin. Defeat the Arachnode and retrieve its body.

Have Alph retrieve all the nearby Pikmin and head south. Use all your Pikmin to start retrieving the Nuggets on the ledge.

After that, head north with your Winged Pikmin and ride on the lily pad. Have the Winged Pikmin retrieve the fruits on the water. 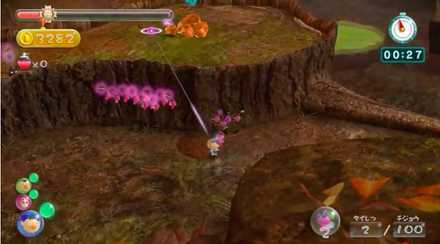 Retrieve the Armored Cannon Larva and surrounding enemies. Take the Winged Pikmin that were retrieving Nuggets and perform an all-out attack to take them down and retrieve them. Have one leader by the starting area to assist in retrieval work.

Post (1 Comments)
Opinions about an article or post go here.
Opinions about an article or post
We at Game8 thank you for your support.
In order for us to make the best articles possible, share your corrections, opinions, and thoughts about "Twilight Hollow Remix Platinum Medal Walkthrough (Collect Treasure!)" with us!
When reporting a problem, please be as specific as possible in providing details such as what conditions the problem occurred under and what kind of effects it had.