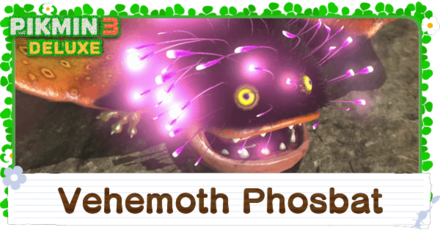 This video shows one method of defeating the Vehemoth Phosbat with 0 Pikmin deaths!

These steps are the premise of battling the Vehemoth Phosbat, the boss of the Distant Tundra. Defeating it will allow Captain Charlie to join your team (who is required to progress through the story). It will also net you a Heroine's Tear.

While having a mix of all three kinds of pikmin is useful, you must bring at least 20 yellow pikmin and rock pikmin, as lightbulb circuits and large crystals will present themselves as obstacles here.

Use the Glowcaps to light up the cave 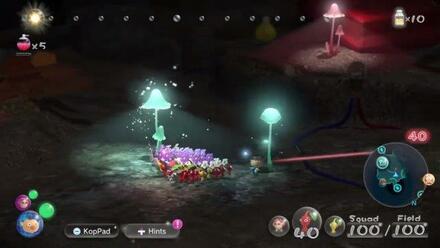 If your team leaders and pikmin are in a dark area, the Vehemoth Phosbat will swoop in and attempt to attack by sucking them in. It will avoid lit areas, so make sure to step on (or throw pikmin at) the small lights on the ground, which will cause Glowcaps to emerge, allowing you to keep the Vehemoth Phosbat away.

Use the Yellow Pikmin to turn on the lightbulbs 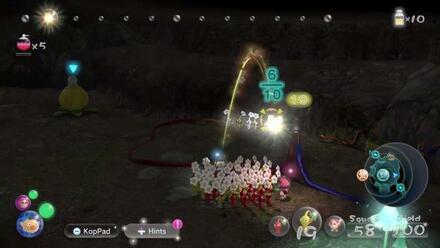 In order to bring the Vehemoth Phosbat down to the ground so you can attack it, you first need to have your yellow pikmin turn on the lightbulbs. Knowing this in advance, make sure to bring no less than 20 yellow pikmin (even more is better), and split up your pikmin teams between leaders to increase efficiency.

Collect the fragments from two areas and build the bridge

In order to turn on the large lightbulb, you first need to have your pikmin build a bridge to get you there. While there is an elevated area to the north with fragments that can be accessed by breaking the large crystal, these fragments can also be reached by simply throwing yellow pikmin to the pile.

To get the pikmin to the fragments in the west area, they'll need to use the climbing stick. There are several enemies in the vicinity, so taking them out beforehand will allow you to move the fragments uninterrupted. For most enemies here, throwing rock pikmin directly at them will deal enough damage to take them out with the initial impact.

Attack from behind after turning on the large lightbulb 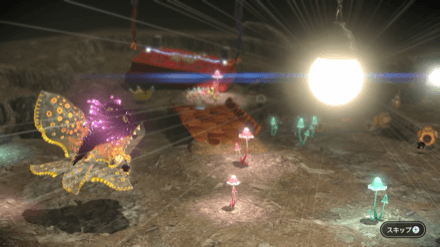 After building the bridge, cross over it to find a large lightbulb. Throw your yellow pikmin at it to light up the room and bring down the Vehemoth Phosbat. When it gets back up it will spread venom to all of your pikmin, but if you whistle for them all quickly, they will heal and can avoid a poisonous death. 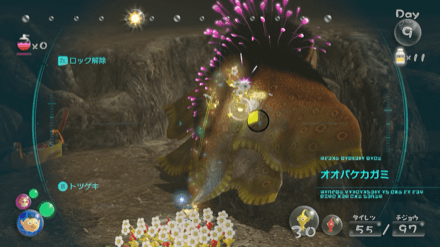 After turning on the lightbulb, the Vehemoth Phosbat will have a harder time moving around, and it will try to run away and cling to the wall. Even if the Phosbat isn't on the ground, you can throw your pikmin at its backside to attack while it is turned away. We recommend red and yellow pikmin for this.

Can be taken out without turning on the large lightbulb

It's possible to take out the Vehemoth Phosbat before even turning on the large lightbulb. You don't need to worry about moving the fragments to build the bridge, so this battle can be done very quickly. If you're aiming for quicker times, use the small lightbulbs to take it down.

Strategy is the same as in the story mode

The strategy for battling with the Vehemoth Phosbat doesn't change significantly from the story battle. The basic process is to turn on lightbulbs and attack while transporting bridge fragments, complete the bridge, turn on the large lightbulb, then attack the boss. Make sure to attack it when it clings to the wall.

Register as a member and get all the information you want. (It's free!)
Login
Opinions about an article or post go here.
Opinions about an article or post
We at Game8 thank you for your support.
In order for us to make the best articles possible, share your corrections, opinions, and thoughts about "Boss Battle Guide: How to Beat the Vehemoth Phosbat" with us!
When reporting a problem, please be as specific as possible in providing details such as what conditions the problem occurred under and what kind of effects it had.