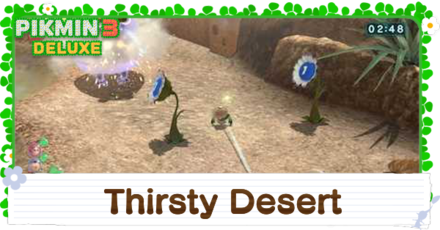 A guide to obtaining the platinum medal for the Battle Enemies! Mission: Thirsty Desert in Pikmin 3 Deluxe for the Nintendo Switch. This guide will walk you through how to clear the mission and earn a platinum medal! 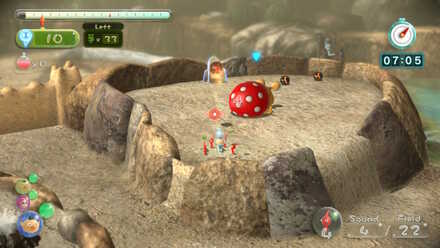 Bomb Rock is the key to getting the Platinum Medal of this mission as it can defeat enemies instantly. Make sure to throw them on a spot where enemies can't see it to avoid missing your targets. 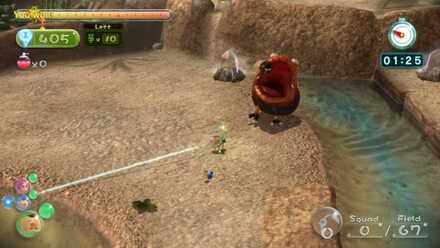 The Spotty Bulbear is the most dangerous enemy in this mission. This enemy is extremely intimidating but you can simply let him devour a Bomb Rock to take it down, sacrificing a Pikmin in the process. 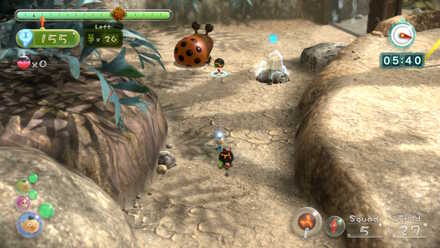 Move them to the eastern dirt wall and start breaking it. 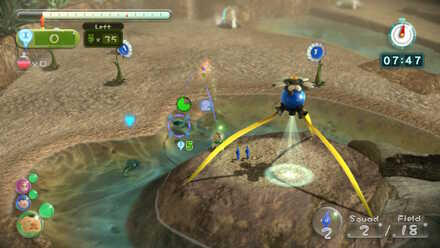 Gather the Blue Pikmin in front of Charlie and defeat the enemies in the water and the surrounding area. Grab the Bomb Rock and throw it at the dirt wall.

Return to the Onion to collect the other Blue Pikmin then proceed south. 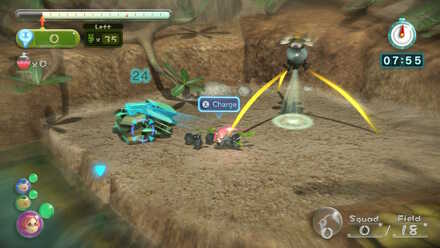 Gather the Rock Pikmin and immediately have them rebuild the bridge.

Once the bridge is done, defeat the Dwarf Bulborbs and the Yellow Wollywog on the other side. 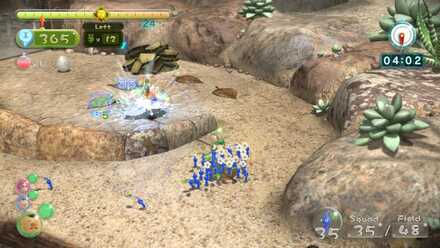 As soon as you get across the waters on the south, defeat the nearby enemies including the Desiccated Skitter Leaves uphill before grabbing the Bomb Rocks. Regroup back at the Onion. 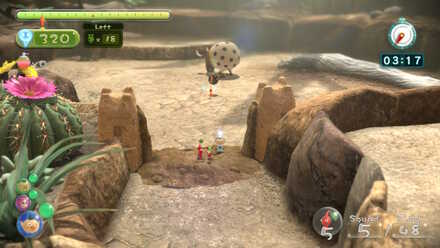 Using Alph, throw a Bomb Rock at the Whiptongue Bulborb to defeat it before destroying the next dirt wall. 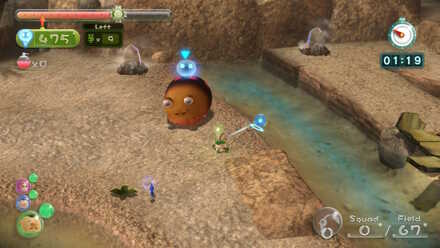 Control Charlie, go past the destroyed dirt wall, and let the Spotty Bulbear devour the Pikmin holding one of your Bomb Rocks.

When the second dirt wall is destroyed, bring some Blue Pikmin with Alph to the waters near Brittany's starting point to defeat the remaining enemies.

Back to Charlie, go to the lake near the Spotty Bulbear and wipe out the remaining enemies to complete the mission.

Post (0 Comments)
Opinions about an article or post go here.
Opinions about an article or post
We at Game8 thank you for your support.
In order for us to make the best articles possible, share your corrections, opinions, and thoughts about "Thirsty Desert Platinum Medal Walkthrough (Battle Enemies!)" with us!
When reporting a problem, please be as specific as possible in providing details such as what conditions the problem occurred under and what kind of effects it had.