Boss Guide: How to Beat All Bosses | Pikmin 3 Deluxe 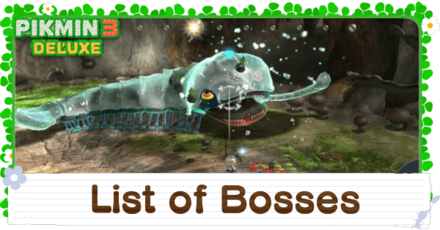 Bosses of Each Area 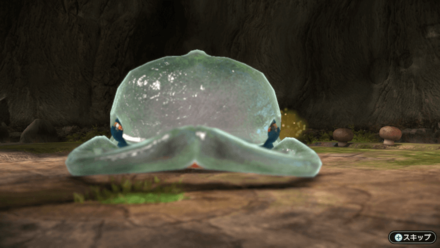 The first boss fought in Pikmin 3, which is found the first time you go to the Garden of Hope. As you may expect from the first boss, it is much easier than subsequent bosses.

The key to defeating the Armored Mawdad lies in breaking its crystal. Once the crystal is broken, Pikmin will be able to damage to it, so in the beginning of the battle use Rock Pikmin to break the crystal. 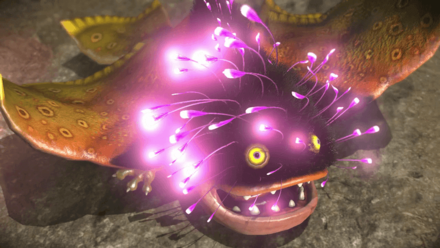 An interesting boss fight, as it takes place while moving around a cave and building bridges, so it is a very interactive boss fight. Fought in the Distant Tundra, before saving Charlie. 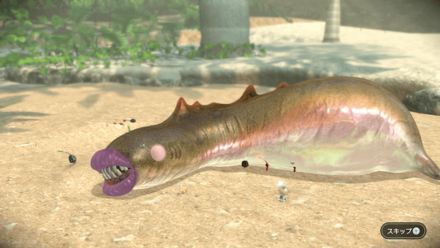 Not an incredibly hard boss fight, but it is wise to prepare by bringing Bomb Rocks, as they are very effective when it creates its pits. This boss is fought in the Tropical Wilds level.

To defeat the Sandbelching Meerslug, perform a charge attack when it sticks its head out and pull it out from the ground. It will try to suck Pikmin down into bottom of the pit, but this is easily avoidable by creating distance. Approach it when it pops its head out and attack after using Ultra-Spicy Spray to defeat it. 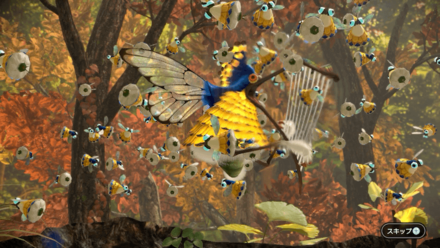 The boss of the Twilight River. Bringing plenty of Winged Pikmin here are essential to the fight, so prepare at least 50~60.

Scornet Maestro can be defeated by using charge attacks with Winged Pikmin, then charging with remaining Pikmin after downing it. Many Scornets will rush in, but by utilizing the Dodge Whistle, it is possible to avoid them. When the Scornet Maestro falls to the ground, use the Pikmin on the ground and perform another charge attack to finish it. 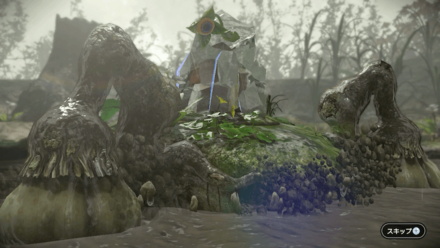 One of the harder boss battles in the game. Fought the second time you go to the Garden of Hope. You'll need rock pikmin to break its crystal, and plenty of Blue or Winged Pikmin to do the fighting. Do not bring Red or Yellow Pikmin to this boss battle, as they will drown easily.

To defeat the Quaggled Mireclops, attack its weak spot while avoiding its tongue attacks. After the Quaggled Mireclops falls down, you will be able to dodge if you send a charge order to your Pikmin aimed at the top of the lid when the lid starts to move. During this time, use the Ultra-Spicy Spray and attack to secure a quick victory. 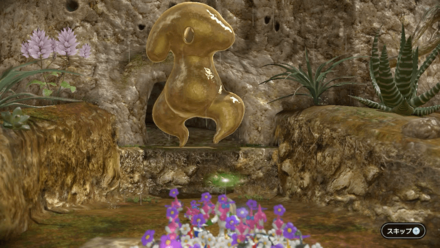 The final boss fight of Pikmin 3. Fought at the end of Formidable Oak, after pulling Olimar to the very end.

To take down the Plasma Wraith, pay attention to when it changes forms and attack with the corresponding Pikmin. There are 4 forms in total. Aside from using the Rock Pikmin to break the crystal, if a Pikmin is stepped on, it will result in an instant death, so be careful to dodge during the fight! For this reason, Rock Pikmin are especially good in this battle.

Post (0 Comments)
Opinions about an article or post go here.
Opinions about an article or post
We at Game8 thank you for your support.
In order for us to make the best articles possible, share your corrections, opinions, and thoughts about "Boss Guide: How to Beat All Bosses" with us!
When reporting a problem, please be as specific as possible in providing details such as what conditions the problem occurred under and what kind of effects it had.