How to Get All Space Suit Upgrades | Pikmin 3 Deluxe 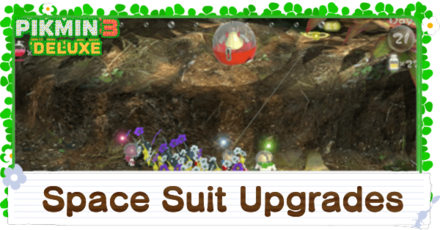 This is a guide on how to get all the Space Suit upgrades found in Pikmin 3 Deluxe for the Nintendo Switch. Read on to learn more about the location of each upgrade, and what abilities they have.

Where to Find the Space Suit Upgrades

The Dodge Whistle can be obtained in the Distant Tundra, anytime after reuniting Alph and Brittany. It can be found in the southwest part of the map. After fighting the Joustmite that emerges from the ground, continue walking uphill, until you see a bouncing mushroom. Throw a leader and at least 10 Pikmin at the Bouncing Mushroom to pick it up and bring it back to the S.S. Drake.

Along the way, you may need to switch to the leader you threw in order to take out enemies along the way.

The Dodge Whistle will allow your Pikmin to dodge attacks by pressing left or right on the D-Pad. This greatly increases the survivability of your Pikmin against enemy attacks, and is very useful in boss battles, such as the Scornet Maestro.

When you get the Anti-Electrifier, all of the Crew Members' space suits become immune to electricity and electrical attacks.

The Metal Suit Z can be found within the Tropical Wilds. From the southeast part of the map, there is a small path with a raised platform where you can recover it from.

When you get the Metal Suit Z, all of the Crew Members' space suits' durability increases, and incoming damage to them gets halved.

The Scorch Guard can be found in the Twilight River. It is found near the area right before you fight the Burrowing Snagret. Walk past where you would fight this foe (marked by an apple on the map), and then there should be a raised area on the left where you can throw some Pikmin. Throw about 10 up there, and they will uncover the item, then bring it back to the S.S. Drake.

When you get the Scorch Guard, all of the Crew Members' space suits become immune to fire and fire attacks.

Post (0 Comments)
Opinions about an article or post go here.
Opinions about an article or post
We at Game8 thank you for your support.
In order for us to make the best articles possible, share your corrections, opinions, and thoughts about "How to Get All Space Suit Upgrades" with us!
When reporting a problem, please be as specific as possible in providing details such as what conditions the problem occurred under and what kind of effects it had.