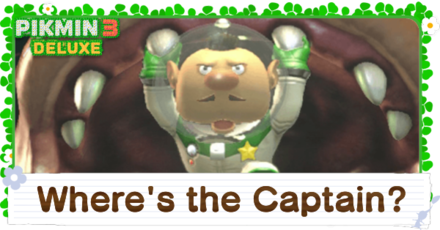 This is a story walkthrough for Where's the Captain? in Pikmin 3 Deluxe for the Nintendo Switch. This guide will cover the path in Distant Tundra that leads you to the boss, as well as all fruit that can be obtained at this time.

1: Use the Bouncing Mushroom to get the Dodge Whistle 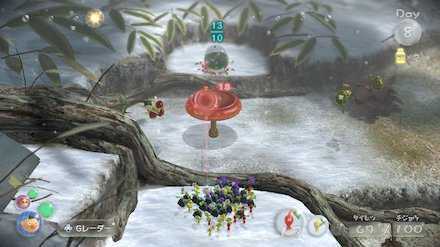 To the right, you will see a Bouncing Mushroom. Throw a leader and at least 15 Pikmin at it. This will allow the Pikmin to carry the object back to the Drake, granting you use of the Dodge Whistle. Swapping over to the other leader and taking out the Swooping Snitchbug will allow you to transport the item without interruption. A single rock Pikmin can take them down, which is an opportunity to charge your other Pikmin at it. 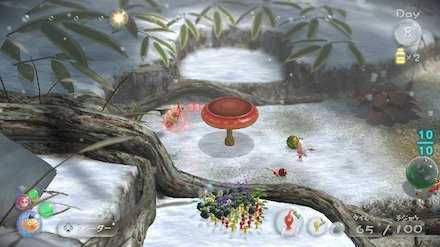 Nearby the Bouncing Mushroom, you'll see a plant with some red fruit on it, which you can charge your Pikmin at to have them recover. While this 'fruit' is not actually edible, bringing several of them back to the Drake will allow you to store up a reserve of Ultra-Spicy Spray, which is effective at making Pikmin faster and more powerful.

If you put about 5 Pikmin or so on the plant, they will continuously harvest the berries all day, allowing you to focus on other tasks while filling up your stock. Just be sure to go back and collect them before ending the day, as they'll keep going back to the same spot until commanded to regroup.

Recover the Dawn Pustules too if you can manage it 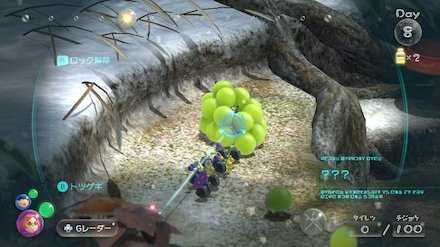 In the same vicinity, you can also find the Dawn Pustules. If you have enough time and Pikmin, you can go ahead and bring it back to the Drake for analysis, but if not, you can always come back for it later if you want to prioritize exploration.

3: Push the Iron Ball to Open the Cave Entrance 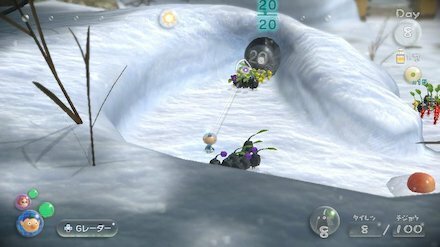 On the snowy hillside where Brittany used the geysers to collect bridge fragments earlier, there was an iron ball. Return to this spot, then throw a leader and 10 Pikmin over the cliff. Switch to the leader you just threw, and have them throw all 10 Pikmin at the iron ball, which will roll down the hill and open up a cave.

4: Light up the Lightbulb and exit the cave 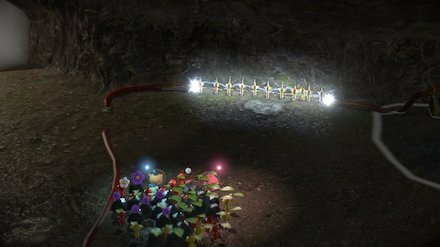 Enter the cave and use some red Pikmin to take out the 3 Pyroclasmic Slooches by throwing them on their backs, then throw 10 yellow Pikmin at the electrode to light up the lightbulb. This will cause the large flowers (Bloominous Stemples) to open up so that you can walk on them. Continue through the cave and go out the other side.

Recover the Citrus Lump before leaving 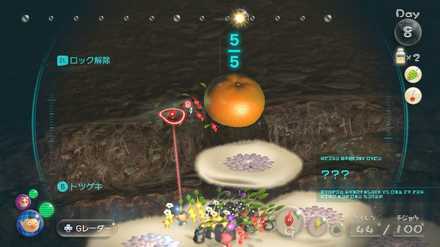 Before leaving the cave, go on top of the Bloominous Stemples and throw some Pikmin and a leader to the raised area, then have the Pikmin revover the Citrus Lump found up there.

5: Break the crystals and continue to the right 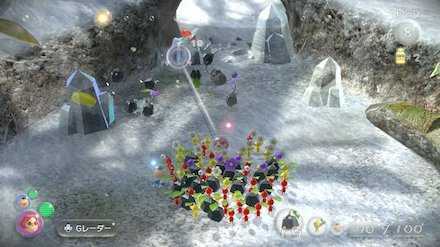 After exiting the cave, there will be several large crystals on your path. Use rock Pikmin to break them and continue. When the path forks, head to the right, as another upgrade can be found this way.

6: Recover the Anti-Electrifier and head left 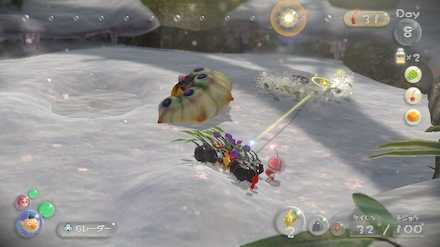 Head all the way right, and along the way you'll encounter 3 Desiccated Skitter Leaves (which look exactly like fallen leaves), as well as an Arctic Cannon Larva, so take them all out. Several things are buried here in the snow, including the Anti-Electrifier and a 5 Pikmin pellet, so have your Pikmin divide up to dig and subsequently recover everything here. Keep in mind that yellow Pikmin are the fastest diggers.

7: Use 10 yellow Pikmin to turn on the lights 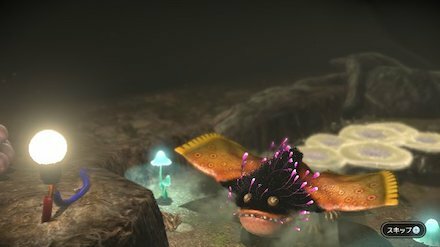 Now head back the way you came, and this time continue down the left path, where you'll find another cave. Several Phosbat larvae are inside, but by lighting up the mushrooms in the cave, they will die from exposure to the light. There is an electrode to the right wall, so head there and throw 10 yellow Pikmin on it to light up the lightbulb.

The Phosbat will drop eggs which, when broken by Pikmin, drop nectar. Use this nectar to power up your Pikmin, as it will make the approaching boss battle easier.

Recover the Dusk Pustules before leaving 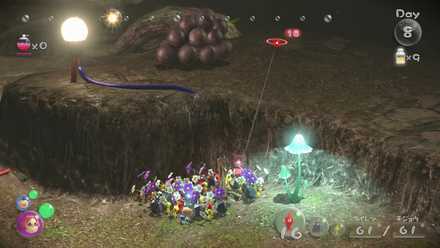 If you have enough time and Pikmin at your disposal, you can retrieve the Dusk Pustules found on a ledge nearby, and have it analyzed by the Drake.

8: Move the paper bag to create a shortcut 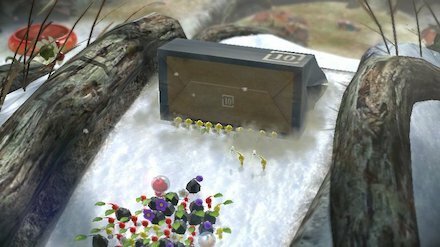 Before fighting with the Vehemoth Phosbat, continue forward into the cave, and head straight for the cave exit in this area. There is a paper bag here, so put 10 Pikmin on it to push it forward. This is a huge shortcut for getting directly to the Vehemoth Phosbat, and will also be useful for transporting the enemy remains and fruit after the battle ends, so make sure to secure this route beforehand.

After doing so, you can either choose to continue with the battle, or gather your Pikmin all up and end the day.

Recover the Dapper Blob if you have time 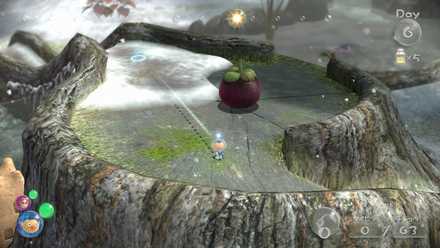 If you have enough time and choose to not proceed with the boss fight, you can recover a Dapper Blob. It can be found up a slope, in the middle of a tree trunk. Be wary of a hidden Joustmite nearby, it can catch you off guard and make you lose Pikmin. Defeating it first is a priority!

In order for us to make the best articles possible, share your corrections, opinions, and thoughts about 「Where's the Captain? Walkthrough | Pikmin 3 Deluxe」 with us!