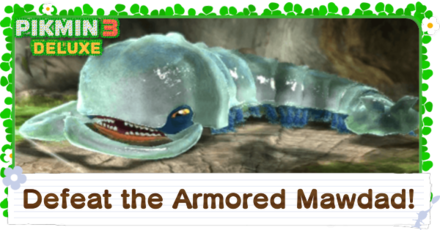 This is a story walkthrough for Defeat the Armored Mawdad! in Pikmin 3 Deluxe for the Nintendo Switch. This section will cover the battle with the Armored Mawdad in the Garden of Hope, and following the Captain's Signal. Read on for tips and strategy for getting through this section!

1: Divide into two teams and set off 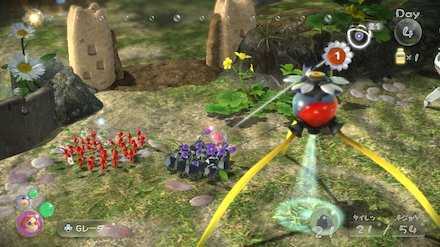 After finding the location of the mysterious signal inside of the cave, the Armored Mawdad will emerge, and the battle with the giant creature will begin. As its name implies, the creature is armored, so you won't be able to hurt it with Red Pikmin alone. Therefore, we recommend you go ahead and break into two teams: one of Rock Pikmin and one of Red Pikmin (a little over 20 of each one should suffice).

Take control of the Rock Pikmin party and head for the cave, while using Go Here! to instruct the Red Pikmin party to wait just outside of the cave.

2: Battle and defeat the Armored Mawdad 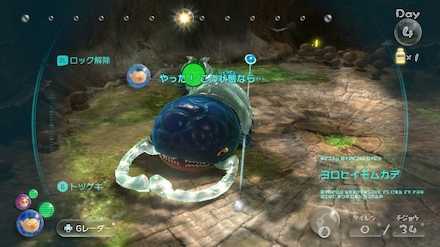 While this boss is really not too difficult, you'll lose a lot of your pikmin if you don't know how to take it out. By throwing Rock Pikmin directly at its mandibles,
head, and exoskeleton, the thick armor will be removed, which will allow you to deal damage to it. If your goal is to not lose any Pikmin, we highly recommend staying behind the Armored Mawdad and attacking it only when it is facing the wall, as it will have a hard time attacking.

You really need to watch out for its mandibles, as it can snatch up Pikmin and devour them. If this happens, you may be able to save them by quickly throwing Rock Pikmin at the mandibles to save them.

Boss Battle Guide: How to Beat the Armored Mawdad

Call in the Red Pikmin after its armor is off 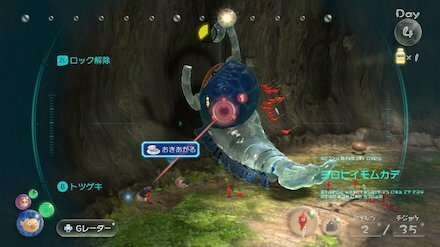 Once the armor is finally off, call in the Red Pikmin team and converge, then you're in the home stretch. Swap over to the group that had been waiting right in front of the cave, then step in to join the battle. Throw the Red Pikmin directly at the Mawdad's head, or charge it from behind, to whittle away its health until finishing it off. 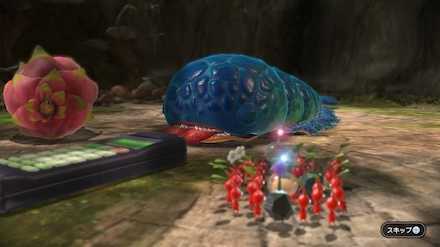 Once you defeat the Mawdad, it will drop a large cellphone like device, as well as a fruit. After the short cutscene ends, you can use your Pikmin to recover both the Data Glutton and the Fire-Breathing Feast back to the S.S. Drake. Although the Captain wasn't there, the Data Glutton will allow you to proceed toward the Distant Tundra.

Depending on how much time you had when you started the battle, it may be getting close to sunset. If this is the case, it may be better to leave everything behind and come back the next day (don't worryーthe Armored Mawdad's carcass will be there the next day too!).

In order to carry the Data Glutton, Fire-Breathing Feast, and the Armored Mawdad's remains, you'll need a minimum of 45 Pikmin on hand, so as long as you aren't about to run on fruit, there should be no problem with coming back for it all on the following day.

Post (0 Comments)
Opinions about an article or post go here.
Opinions about an article or post
We at Game8 thank you for your support.
In order for us to make the best articles possible, share your corrections, opinions, and thoughts about "Defeat the Armored Mawdad! Walkthrough" with us!
When reporting a problem, please be as specific as possible in providing details such as what conditions the problem occurred under and what kind of effects it had.