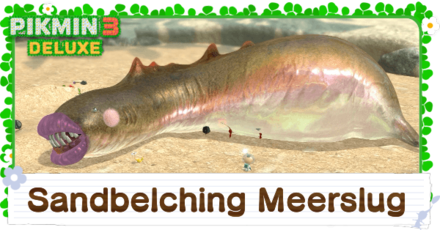 This video shows one method of defeating the Sandbelching Meerslug with 0 Pikmin deaths!

These steps are the premise of battling the Sandbelching Meerslug, the boss of the Tropical Wilds. Defeating it will earn you the Folden Data Glutton (which is required to progress through the story), as well as a Crimson Banquet.

Keep your distance when it creates a sinkhole 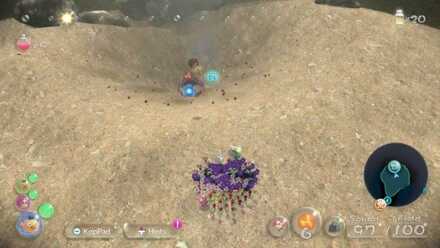 The Sandbelching Meerslug mostly attacks by forming a sinkhole and trying to suck in your leaders and pikmin. Keep your distance and avoid getting sucked in. If your pikmin do get sucked in, whistling for them will allow them to make their way out and avoid being eaten.

If you have pikmin with bomb rocks on your teams, you can throw one in and then whistle for it to come back. This will cause the Sandbelching Meerslug to eat the bomb rock, which gives you an opportunity to attack as it emerges. Therefore, picking up the bomb rocks earlier in the map is very useful! If you choose to do this, it would be wise to have one leader that only holds onto the bomb rock pikmin.

Charge your pikmin at its head when it emerges 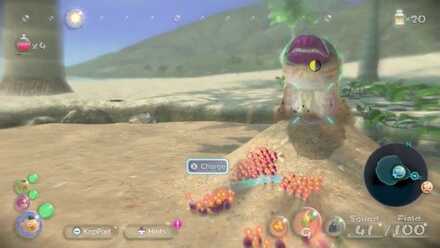 Attack again when its body emerges 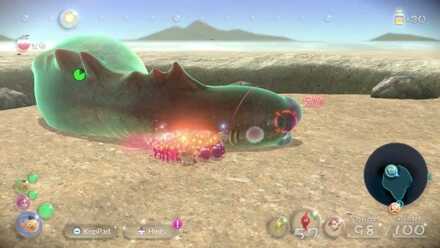 Watch out for the large sinkhole 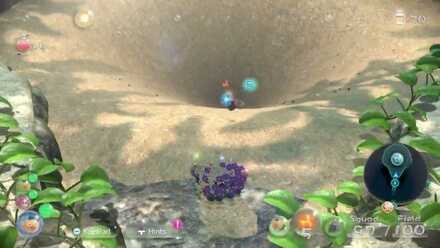 Once the Sandbelching Meerslug's HP goes below 50%, it will attack with a very large sinkhole, which takes up most of the area. Stay as far away from this sand pit as you can, and once again, whistle for any pikmn who get sucked in. You can use pikmin holding bomb rocks here as well.

Charge at it when it pokes its head out

Use the two Bomb Rocks

To take care of this boss quickly, you should try using the Bomb Rocks found in the area, which can be found in the raised area just to the start of the entrance, and also dug up from the dirt mounds. Throw a pikmin holding a bomb near the center of the sinkhold to deal heavy damagr and blow the Sandbelching Meerslug out of the sand.

Post (1 Comments)
Opinions about an article or post go here.
Opinions about an article or post
We at Game8 thank you for your support.
In order for us to make the best articles possible, share your corrections, opinions, and thoughts about "Boss Battle Guide: How to Beat the Sandbelching Meerslug" with us!
When reporting a problem, please be as specific as possible in providing details such as what conditions the problem occurred under and what kind of effects it had.