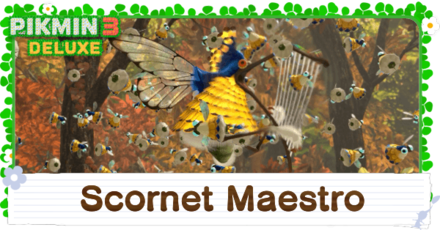 This video shows one method of defeating the Scornet Maestro with 0 Pikmin deaths!

How to Beat the Scornet Maestro

These steps are the premise of battling with the Scornet Maestro, the boss of the Twilight River. Defeating it allow you to save the Hocotatian and recover a Seed Hive.

For this battle, winged pikmin are absolutel essential, so bring a lot with you (30 to 40 should be plenty). Red pikmin and rock pikmin are also good choices for their damage output, so bring several of each. Using ultra-spicy spray will also make charging much more effective, so stocking up beforehand is in your best interest. Lastly, if you don't have it yet, you should make sure to get the Dodge Whistle before the battle. 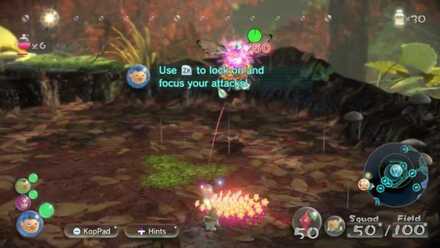 The Scornet Maesto commands a fleet of scornets to attack, rather than attacking directly. The main trick of this battle is to wait for it to send its scornets at you, dodge them with the Dodge Whistle or by avoiding them, then having your winged pikmin charge at it to take it down.

Have your other pikmin charge at it when it falls 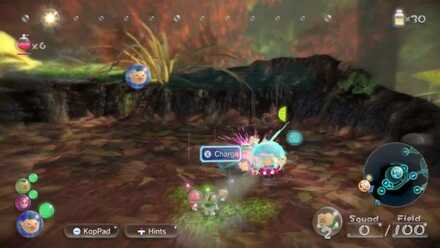 When your winged pikmin charge at the Scornet Maestro, they will bring it down to the ground. At this point, you should have your remaining pikmin charge forward at it to attack and deal even more damage.

Watch its eyes to know when it will attack 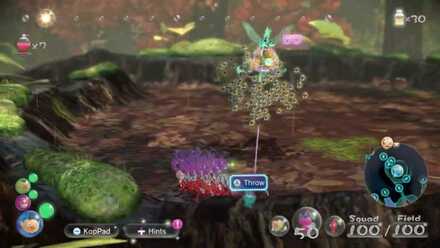 You can tell when the scornets are about to charge at you by looking at their eyes. Right before they come for you, their eyes will turn red, and the buzzing sound will grow louder, so use the Dodge Whistle right as you see this to avoid an attack.

If the scornets do manage to catch any of your pikmin, they will carry them around in a circle for a bit, before killing them. If you plan to beat this boss without any casualties, be sure to target these scornets with a rock pikmin (or any other type) and take them down to save your captive pikmin.

Don't attack before it has fired off its scornets! 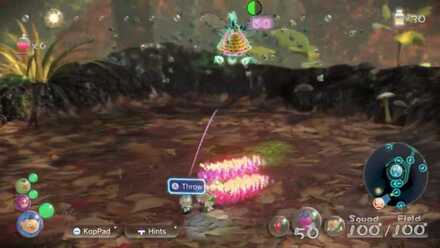 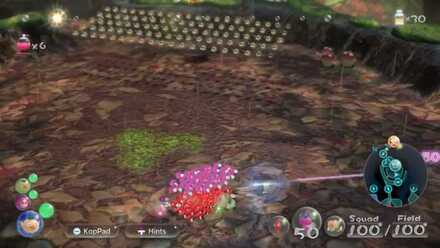 Once the Scornet Maestro's HP goes below 50%, it will have the scornets attack in a formation that consists of five horizontal lines. When this happens, you won't have a lot of room to run, but if you make efficient use of the Dodge Whistle to get to the outer edge of the area, you should be able to dodge each wave of scornets.

Use the dodge whistle to ecape the ring 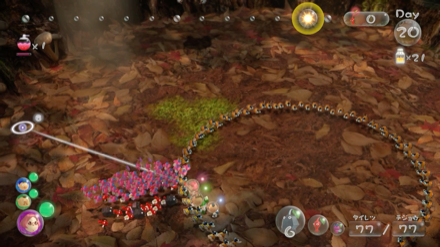 Once it is almost defeated, the Scornet Maestro will have the scornets encompass you and your pikmin in a ring. You can use the Dodge Whistle to slips through the breaks in the ring, which will allow everyone to escape.

Alternatively, use rock pikmin (or another type) to kill a few scornets so there is space to pass, then exit and call your pikmin to follow.

To get a faster clear time in the Defeat Bosses! Mission, you'll need to pluck the Winged Pikmin in the area. Winged Pikmin have the important job of knocking down the Scornet Maestro to the ground, so it's more important to pluck them over other Pikmin types. Use the time before the Scornet Maestro sends its scornets at you to increase your squad size.

In both the mission and story mode, you'll need to wait until after the Scornet Maestro sends its scornets at you to make an attack. As soon as you dodge the last scornet wave, have your Winged Pikmin charge to bring it down, then have all other Pikmin charge at it. Doing this twice should be enough to win.

Like in the story, you can use the Dodge Whistle, so make use of it when avoiding the waves of scornet attacks.

Post (0 Comments)
Opinions about an article or post go here.
Opinions about an article or post
We at Game8 thank you for your support.
In order for us to make the best articles possible, share your corrections, opinions, and thoughts about "Boss Battle Guide: How to Beat the Scornet Maestro" with us!
When reporting a problem, please be as specific as possible in providing details such as what conditions the problem occurred under and what kind of effects it had.