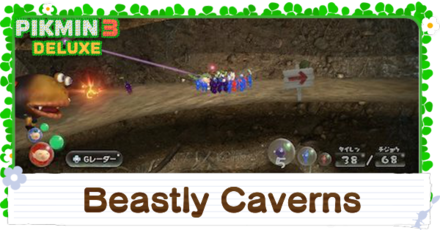 A guide to obtaining the platinum medal for the Collect Treasure! Mission: Beastly Caverns in Pikmin 3 Deluxe for the Nintendo Switch. This guide will walk you through how to clear the mission and earn a platinum medal!

Be Careful of the Confusing Terrain 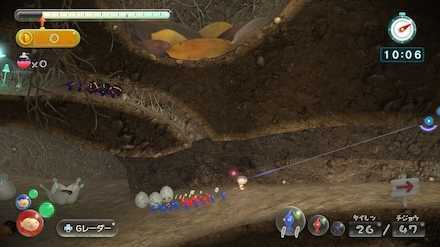 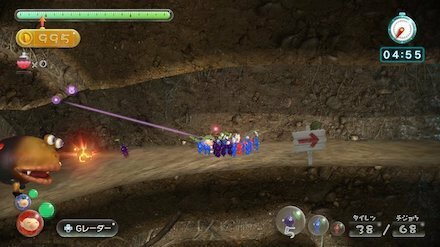 The use of Bomb Rocks will become quite important here. Whether defeating strong enemies, exploring further, or trying to cut down on time, the Bomb Rocks can be used to do all three. Make effective use of the versatile Bomb Rocks. 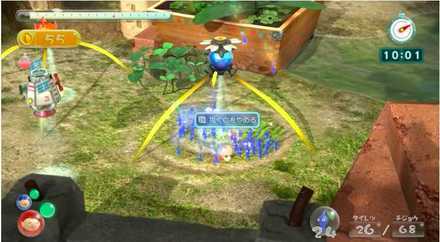 Start off in Beastly Caverns by increasing your Blue Pikmin. While having the Blue Pikmin transport the nearby Pellet, use the remaining Pikmin to destroy the dirt wall. During this time, also defeat the nearby enemies.

2: Split Up for Retrieval Inside and Outside the Cave 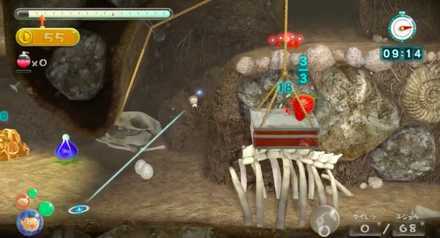 Have Olimar head to the south area of the cave with many Blue Pikmin. If you defeat enemies while progressing to the west, you will come across some Purple Pikmin holding a Bomb Rock. Call them and have them join your squad. Use the Bomb Rock and defeat the Spotty Bulbear. It will spit up Louie so be sure to retrieve him.

While defeating the enemies, throw a few Pikmin at the Nuggets and have them retrieve them.

While Olimar is exploring the inside of the cave, use the Go Here function and have Alph and many Blue Pikmin head to the northern area where a Sunseed Berry can be seen. Retrieve the fruit while also defeating the Bulborb. Also be sure to take the Bomb Rock that is inside the hole.

After taking out the Bomb Rock, head to the iron wall that is located to the east of the starting area.

3: Split into 3 Groups and Explore 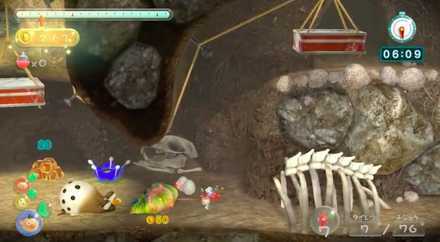 Afterward, progress to the dirt wall located to the north and destroy it with another Bomb Rock. Using 2 more Bomb Rocks to defeat the enemies immediately behind the dirt wall is also recommended.

Continue retrieving the fruits nearby the starting area with Alph. While plucking Pikmin, handle the retrieval of the Dawn Pustules, Fire-Breathing Feast, and all the other fruit in the eastern area.

Afterward, head to the area where the Armored Cannon Larva was defeated and begin retrieving the Nuggets there.

Have Louie enter the cave from the south with many Blue Pikmin. After entering, have the Blue Pikmin start retrieving the Nuggets located on the right-hand side. 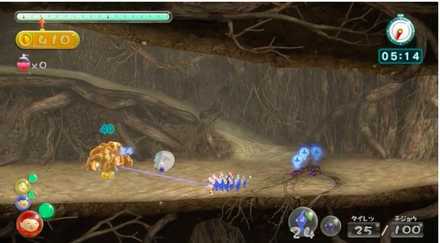 With this, all that is left is to retrieve Nuggets and finish off the remaining enemies. Defeat the submerged enemies with Louie and the remaining Blue Pikmin and retrieve their bodies. After retrieving everything, the mission will be completed.

Post (0 Comments)
Opinions about an article or post go here.
Opinions about an article or post
We at Game8 thank you for your support.
In order for us to make the best articles possible, share your corrections, opinions, and thoughts about "Beastly Caverns Platinum Medal Walkthrough (Collect Treasure!)" with us!
When reporting a problem, please be as specific as possible in providing details such as what conditions the problem occurred under and what kind of effects it had.