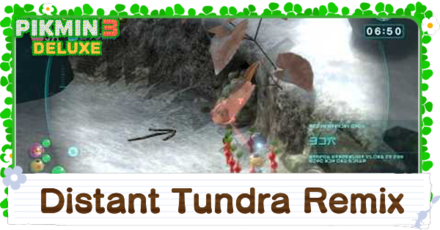 A guide to obtaining the platinum medal for the Battle Enemies! Mission: Distant Tundra Remix in Pikmin 3 Deluxe for the Nintendo Switch. This guide will walk you through how to clear the mission and earn a platinum medal!

In the beginning of the mission, all three captains will start in a position far from each other. Use your multi-tasking skills to divide tasks properly while increasing the number of available Pikmin.

Use the Lock-On Feature 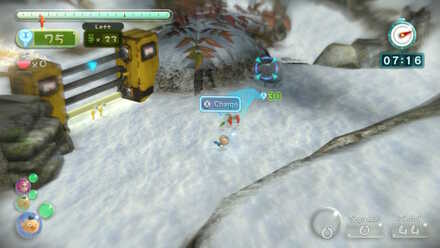 Make use of the lock-on feature (ZR) to attack enemies accurately and quickly. This can also OHKO small enemies easily and even allow you to strafe while attacking. 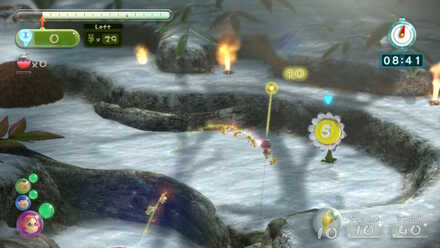 Gather the Yellow Pikmin and jump on the mushroom to reach the area above. Get the pellet with eight Yellow Pikmin then have the last two start munching the electric gate ahead. Return Brittany to the Onion.

Pluck the Yellow Pikmin and remove the small mushroom on the right to get to the area north. Throw all the Yellow Pikmin over to the other side of the river then move Brittany southeast to the elevated platform near the mushroom. 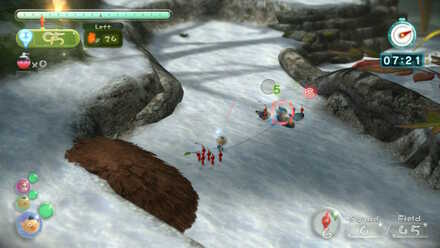 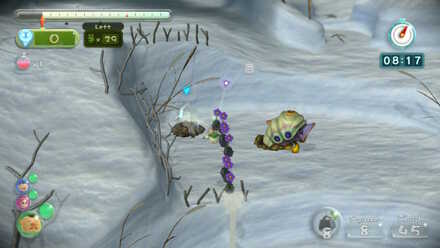 Pluck the Rock Pikmin, break the crystal, and ride the geyser to get behind the Arctic Cannon Larva. Defeat it, break the other crystal, and head north to the upper area.

Defeat the Swooping Snitchbug then break the crystal blocking a path to your left. 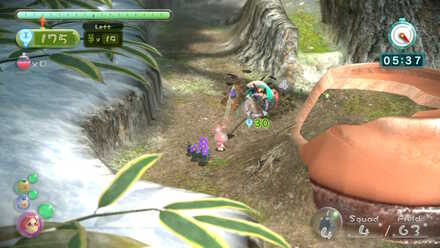 Jump on the mushrooms to the other side and gather the Rock Pikmin on the flower pot. Use them to defeat the Joustmite.

Take a Rock Pikmin with you and head south. Throw it in the hole and collect the red nectar that it will throw out. 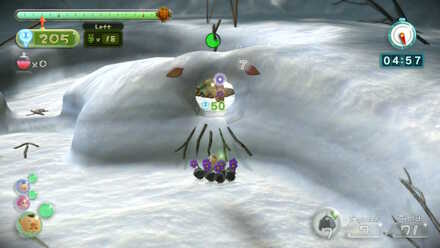 Head east and lock-on to the Arctic Cannon Larva on the other side to attack it through the hole. After defeating it, return to the Onion with the corpse of the Snitchbug and the Larva that you defeated earlier. 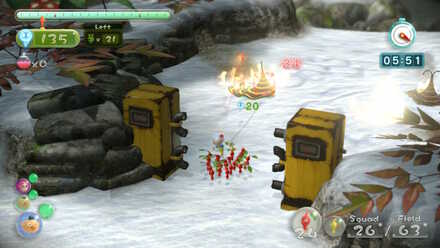 After the electric gate breaks, gather all the Red Pikmin together with the two Yellow Pikmin. Defeat the two Pyroclasmic Slooches and return to the Onion with their corpses.

3: Defeat Enemies in the Unexplored Areas 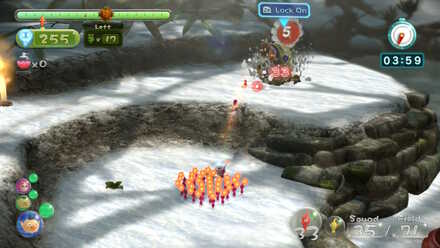 Head northwest near Brittany's starting point, consume an Ultra-Spicy Spray, and throw Pikmin at the Arctic Cannon Larva. Go back to the Onion with its body and the nearby pellet.

Regroup with the Rock Pikmin and head further north to the area with another Joustmite.

Gather the Yellow Pikmin that Brittany threw earlier and destroy both electric gates. Go right past the electric gate and defeat the Bearded Amprat and the Joustmite.

4: Wiping Out the Rest 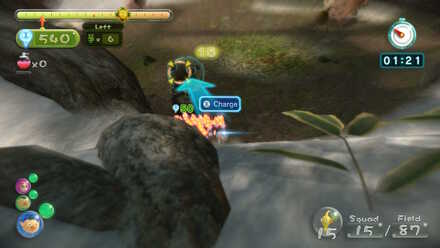 Have Charlie regroup with Brittany's squad and break the crystal nearby. Jump on the mushroom to the other side and take the slide down.

Defeat the two Bearded Amprats and another Joustmite in the area then head past the electric gate near Alph's starting point.

Get Alph to meet with Charlie's squad. Have Charlie transfer all the Yellow Pikmin to Alph then head east and defeat the Male Sheargrubs.

Further to the east is a mushroom. Throw Brittney on it along with some Rock Pikmin to the other side to gather yellow and red nectar from the eggs.

Switch to Alph and go down the area south of his starting point. Consume an Ultra-Spicy Spray and defeat all the enemies in the area.

Switch back to Brittany and go down the platform to take out the last Joustmite and complete the mission.

Post (0 Comments)
Opinions about an article or post go here.
Opinions about an article or post
We at Game8 thank you for your support.
In order for us to make the best articles possible, share your corrections, opinions, and thoughts about "Distant Tundra Remix Platinum Medal Walkthrough (Battle Enemies!)" with us!
When reporting a problem, please be as specific as possible in providing details such as what conditions the problem occurred under and what kind of effects it had.