Pikmin 3 Deluxe Game Length: How Long Does It Take to Beat? 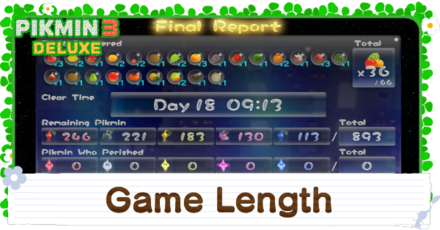 How Long Does it Take to Beat Pikmin 3 Deluxe?

Pikmin 3's Story Mode is relatively short, and even newer players should be able to get through it within about 12 hours total. If you have an idea of what you are doing, the story mode could be cleared in about 9 hours, although speedrunners could certainly beat it much quicker if they had the areas memorized.

This doesn't take in to consideration difficulty level, or the fact that you might be going for a 0-Death run, in which case you may spend extra time playing more patiently or restarting levels. In a typical Normal difficulty playthrough, expect to finish within 9~12 hours.

If you plan to 100% the Story Mode by collecting all 66 fruits, you would need to spend another 2 to 3 hours on top of what you spent just getting through the story. Many fruit can be collected on the way, and you will definitely need to collect a good amount in order to progress, but getting 100% is optional. However, obtaining all fruit is how you view the best ending.

~3 Hours on Side Stories

Side Stories are a new addition to the Deluxe verison of Pikmin 3. Much like Mission Mode, each mission has a time limit, so going off the time limits alone, you would spend 164 minutes (~3 hours) clearing them all. The first batch, Olimar's Assignment takes around 40 minutes, while the remaining 2+ hours is in Olimar's Comeback, which is available after clearing Story Mode.

Keep in mind that this time may fluctuate, as they can be cleared before the time limit, but you might also spend more time replaying them to try and get Platinum on each one.

Side Story Walkthrough: How to Unlock Side Stories

Mission Mode is divided into three tyoes: Collect Treasure!, Battle Enemies!, and Defeat Bosses! The number of missions and approximate time to clear is listed below.

Like with Side Stories, these times may fluctuate, as missions can be cleared before the time limit ends, but you might also spend more time replaying them to try and get Platinum on each one.

Although more of a 2 player minigame than a content for single player, it is worth mentioning Bingo Battle here, simply because some badges require you to play through this mode. If you are playing the mode as intended, you can play through all stages and collect the badges in about 2 hours.

If your goal is simply to get the badges, you can simply put on two players and have one player run into enemies on each map to quickly beat every level, then go back and play to get the other badges that require you to recover items, etc. Doing this would only take about 30 minutes to an hour.

At this point, only a few badges would be left, and collecting them would let you say you have truly 100%'ed Pikmin 3. If you played Pikmin 3 on a low difficulty level, you'll need to replay on Ultra-Spicy Mode to get one of the badges, which could take a bit of time (about 5 hours or more, depending on how well you know the game by that point).

Other miscellaneous badges, like finding murals, using bomb rocks, collecting all upgrades, etc could be collected within the span of about 2 hours. This means that after clearing the game at least once, as well as the bonus modes, you should reliably be able to get all badges with about 2-7 extra hours.

If you are going for 100%, meaning you plan to complete story mode and collect all badges by doing modes like Mission Mode, Bingo Battle, and Side Stories, you will spend about 25 to 30 hours. If you are trying to obtain this goal as quickly as possible, we recommend starting story mode on Ultra-Spicy Difficulty.

Is Pikmin 3 Deluxe Worth It?

Worth it if you haven't played

If you didn't own a Wii U, or you simply never had the chance to pick up Pikmin 3 during its time on that console, we highly recommend Pikmin 3. The quality of life changes and bonus content make Pikmin 3 Deluxe feel like even more of a full game than the original.

While you shouldn't expect to sink 100+ hours into the game, there is a ton of replayability with the ranking features introduced, which allow you to compete with other players online by seeing who was able to clear game modes the most quickly and efficiently.

Possibly worth it if you played Pikmin 3

Whether or not you should pick up the game on Switch if you played the original depends on a few things. If you are a diehard Pikmin fan, you probably already have this game, but if not, we recommend getting it for the portability and neat QoL changes, plus the bonus content.

If you really enjoyed Pikmin 3 on the Wii U, you may want to get it on the Switch too, since the Wii U is more or less a dead console, and the Deluxe version will allow you to replay this game without having to set up your old Wii U.

If you played Pikmin 3 on the Wii U, but just couldn't get into it, you should pass on the Deluxe version. While the removal of Gamepad controls and optimization for Switch controls will certainly appeal to many who were turned off by the Wii U's controls, it is still the same game at its core. The new content is a neat touch, but if you were on the fence about this game to begin with, it probably isn't enough to win you over.

New Features and Changes to Switch Vs Wii U

However if your only issue with the Wii U version was its reliance on the Gamepad, then this could be a good opportunity to try a more grounded version with easier controls.

Register as a member and get all the information you want. (It's free!)
Login
Opinions about an article or post go here.
Opinions about an article or post
We at Game8 thank you for your support.
In order for us to make the best articles possible, share your corrections, opinions, and thoughts about "Pikmin 3 Deluxe Game Length: How Long Does It Take to Beat?" with us!
When reporting a problem, please be as specific as possible in providing details such as what conditions the problem occurred under and what kind of effects it had.